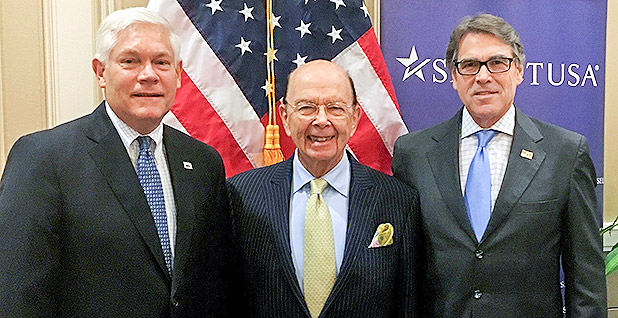 Energy Secretary Rick Perry gave an "all of the above" invitation to prospective foreign investors in U.S. energy projects yesterday, touting wind power and energy efficiency opportunities as well as the fossil fuel investments that have eclipsed renewable power in the Trump administration’s priority list.

"No source of energy is off limits if it can be developed affordably, cleanly [and] bring about greater energy security in the United States," Perry told an audience of more than 2,800 people at the SelectUSA Investment Summit. The meeting is sponsored by the Commerce Department and the International Trade Administration to attract foreign investment in the United States.

"We’re developing and utilizing all forms of energy and technology, and we welcome investment into that very vibrant and growing sector of the American economy," Perry said.

Perry said that when President Trump offered him the Energy Department post, he told him, "Perry, I want you to do for American energy what you did for Texas," where Perry served as governor for more than 14 years.

Texas, a historic home to oil, coal and natural gas resources, leads the U.S. in wind generation and just shipped its first cargo of liquefied natural gas, he said.

"Today we can’t permit quickly enough LNG export facilities along the entire Gulf of Mexico as we are attempting to shift gas to our allies in Asia and Europe," he said.

Perry cited the strategic importance of LNG exports to illustrate the second thing he said Trump told him at his Cabinet job interview. "He said, ‘I don’t want us to just be energy independent. I want us to be energy dominant,’" the DOE chief said.

Shipments of LNG to Europe, he said, signal that "no longer will our friends and allies be held hostage by those who would use energy as a weapon," an implicit jab at Russia’s record of tying its gas shipments to Eastern Europe with its political aims.

In listing reasons for foreigners to choose the U.S., Perry praised the nation’s science and technology endowment. "DOE obviously focuses on energy," he said yesterday. "But we also have a science agency, if you will, and we play an important role in the innovation economy. We work on the discovery and development of new clean energy technologies. We prioritize scientific innovation as a cornerstone of all U.S. innovation leadership and economic prosperity. Research and development is certainly an opportune area for investment."

Perry did not mention the Trump administration’s proposed fiscal 2018 budget for DOE, which cuts deeply into science and renewable energy research programs.

He also implicitly criticized the Obama administration’s clean energy goals that would have increased retirements of older coal-fired power generation, opening the way for more production of power from natural gas and renewables.

"We are not going to let any kind of myopic political decisions restrict us from any reasonable source of energy. … Energy diversity is the best hedge against rising energy costs," he said.

"You’ve got to have a tax policy or tax rate that is globally competitive," said Greg Scheu, president for the Americas region of ABB, the Zurich, Switzerland-based multinational manufacturer. "Frankly the U.S. is just not in the range of being competitive with many countries."

ABB has had U.S. energy companies ready to build a renewable energy project but then be forced into long waits for permits to connect to the power grid, he said. "How long does it take in China?" he asked. "We have to find a way to deliver more efficient decisionmaking and less regulation."

Mary Barra, chairman and CEO of General Motors Co., said it was "vitally important for business … to have the harmonization and simplification of regulation." Add tax reform and a stimulus to innovation, she said. "I think those are three things that are still works in progress" but will definitely support growing business investment, she added.

"These aren’t new ideas. These are 30-year-old ideas. If we can get action on these three things and add that to the great entrepreneurial spirit in this country, that would be amazing."

In response to a question from the audience about Trump’s rejection of the previous presidents’ trade deals, Immelt defended Trump’s position, summing it up as, "’I care about the country’ and ‘make things in the United States.’

"Every one of the presidents of the countries you all live in has done the same thing. I’ve traveled the world for 35 years," Immelt said. "I’ve heard this speech in every language 100 different times. There is nothing wrong with the president of the United States saying that."

To a question about Trump’s immigration position, Immelt said, "We would love to have a market that is open for the free flow of labor. One of the strengths of the United States has been the ability to attract great people to our country all the time.

"I would hate to see that go away," he said, referring to the education many foreigners receive in the U.S. "At the same time I think the president has certain things that he ran on that he is trying to put in place, and that is why we have elections."