Perry’s playbook fills up before his arrival 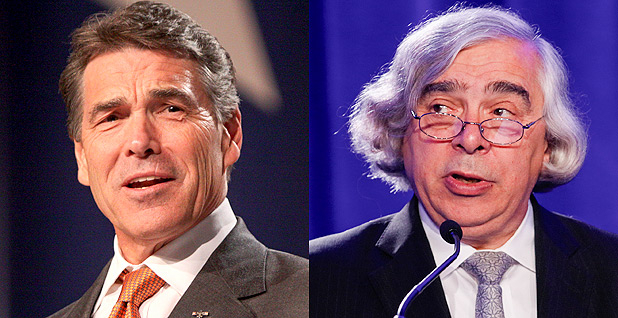 As secretary of Energy, Ernest Moniz helped persuade Congress to give future heads of the Energy Department extraordinary authority over the U.S. electric grid in the event of a national emergency.

In one of his last actions before the Obama administration left office, Moniz urged Congress in December to arm his office with the power to defend against an attack on a local utility or a cascading outage that threatens the larger interstate grid.

In an interview with E&E News, a few weeks after leaving DOE and returning to the Massachusetts Institute of Technology, Moniz said protecting the grid against 21st-century threats requires federal leadership under the Trump administration. It means keeping in place offices critical to that mission, he said, including the Office of Electricity Delivery and Energy Reliability.

Rick Perry, the Republican former Texas governor who is expected to face a Senate confirmation vote next week to replace Moniz, kept his cards close with a number of noncommittal written answers to questions from members of the Senate Energy and Natural Resources Committee. The answers became available this week (E&E News PM, Feb. 6, 2017).

Perry was asked by Sen. Ron Wyden (D-Ore.) whether he would maintain the Office of Electricity Delivery and Energy Reliability’s funding at the fiscal 2016 level. He replied, "If I am confirmed, I will support spending levels that will ensure the Department of Energy can fulfill its mission."

The issue around emergency authority for the secretary of Energy is heating up as Perry prepares to lead an agency with responsibilities stretching from the national laboratories to the safety and maintenance of nuclear warheads. On the energy front, Perry finds himself on the sharp end of a lobbying campaign to shape, and in some cases curtail, DOE’s authority to direct actions down to the electric generator and regional grid operators to protect power supplies during an emergency.

In 2015, Congress passed the Fixing America’s Surface Transportation (FAST) Act, which grants authority to DOE in emergency situations. And the new authority Moniz requested in the Quadrennial Energy Review report in December would require a limited but still precedent-breaking revision of the Federal Power Act’s talismanic separation of the federally regulated "bulk" power interstate network and local utilities that answer to state commissions.

"We tried to put that recommendation forward in some sense in as narrow a way as we could," Moniz said, "but at the same time recognizing the national security concerns that need to be addressed."

There is growing recognition in parts of Congress, he said, that the Federal Power Act, with this bright line separating the interstate grid and local utilities, needs to be modernized.

An Energy secretary who shoulders those responsibilities will need even more expertise from staff in the Office of Electricity, and there, Perry might run into President Trump’s stated intention to sharply downsize federal agencies and shift decisionmaking to the White House and Office of Management and Budget.

"I think there will be real pressure on the DOE budget," said energy lawyer Linda Stuntz, a former deputy Energy secretary under President George H.W. Bush and a member of Moniz’s Secretary of Energy Advisory Board. "I’ve heard there is guidance going out for a 10 percent cut on departments except for Defense."

Power industry leaders supported the emergency authority legislation in principle. But in comments to DOE made public this week, representatives of investor-owned utilities, public power companies and municipal energy cooperatives insisted that DOE emergency plans would have to be shaped by industry. The orders could include directing which generation plants should run or not, and whether parts of cities or regions must be temporarily blacked out to protect vital equipment or systems from cyber damage or rogue solar currents.

The Edison Electric Institute, representing investor-owned utilities, cautioned that DOE should exercise its authority with the goal of "first, doing no harm." It called for prior notice, saying "DOE should revise its proposed emergency procedures to emphasize the importance of industry consultation before the Secretary issues an emergency order."

An order to grid operators to protect electricity supplies to a military base would be appropriate, for example, but DOE should not dictate which customers should lose power to ensure that the defense installation doesn’t go dark, EEI said.

Scott Aaronson, EEI’s executive director for security and business continuity, commented at a House Energy and Power Subcommittee hearing last week, "When the law said consultation with the electric sector ‘where practicable’ to us is a little concerning, given that any emergency order that doesn’t take into account how grid operators actually operate the system could have unintended consequences."

"I do think that given all of the great relationships we have with the secretary of Energy and frankly just the Department of Energy in general as our sector-specific agency, we are confident that they understand us, we understand them, and think we can work productively with them to implement that emergency authority," Aaronson said.

Moniz said he expected that emergency actions by DOE would build on existing rules and practices, and DOE’s budget should include funding for planning exercises for government and industry that would test crisis responses.

In the interview, Moniz made a case for the additional authority he and his policy team proposed that would allow DOE to look at cybersecurity protection for the entire electric power spectrum — transmission, distribution and customer-owned equipment — as a national security imperative. There are 1 million U.S. homes with rooftop solar installations, and the number is growing; there are millions of smart meters; and there is the expectation of billions of grid-connected devices generating two-way power flows in the "Internet of Things," all challenging the historic division of federal and state grid jurisdiction, he said.

"DOE hasn’t completed the implementation of the FAST Act authority they were given," Stuntz noted.

"Hopefully, Secretary Perry and his team, if and when they are confirmed, will pick up on this," she said, "and instead of wanting more authority under the Federal Power Act, will at least implement the authority they were given."

Moniz said in his view, the Federal Power Act’s limitations are recognized in the energy sector.

"The question of actually making further amendments obviously has many, many political dimensions," he added. "But I do think the conversation has started."