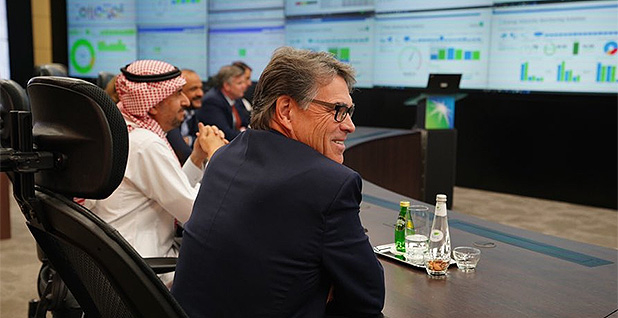 Energy Secretary Rick Perry’s trip to Saudi Arabia this week raised eyebrows — and questions — on Capitol Hill, especially given the country’s potential involvement in the killing of a U.S. journalist.

Senators from both sides of the aisle yesterday expressed a range of surprise, dismay and, in some cases, approval as Perry wrapped up meetings with Saudi officials to nail down a deal involving the construction of U.S. reactors abroad.

"That’s news," Senate Energy and Natural Resources Chairwoman Lisa Murkowski (R-Alaska) told E&E News when asked about Perry’s trip, indicating she had not heard he was in Saudi Arabia.

Perry yesterday tweeted photos of himself and Department of Energy staff meeting with Saudi Minister of Energy Khalid Al-Falih. DOE said Perry met with Al-Falih and the CEO of Saudi Arabian Oil Co. to discuss OPEC, oil markets and the potential for a nuclear agreement after visiting Qatar to discuss energy alliances.

When asked whether Perry’s trip was appropriate in light of the recent slaying of Washington Post journalist Jamal Khashoggi, Democratic Sen. Martin Heinrich of New Mexico replied to reporters, "God, no.

"We should be sending consistent messages about how we expect Saudi Arabia to behave in the world," added Heinrich, who sits on the Energy and Natural Resources Committee, which oversees DOE.

Heinrich said the trip was "just more poor timing and not taking that responsibility seriously about sending a strong message to Saudi Arabia," and that it is "a part of this pattern, where I think this administration intentionally sends the message to Saudi Arabia that empowers them to behave badly in the world, whether Yemen or other things."

DOE did not immediately respond when asked about criticism of Perry’s trip in light of the journalist’s fate. The agency did, however, reveal that Perry during talks with Al-Falih said the U.S. "continues to view Saudi Arabia as an important ally, particularly in the energy space."

Front and center is the CIA’s classified assessment that the crown prince is likely to have ordered Khashoggi’s killing inside the Saudi Consulate in Istanbul. CIA Director Gina Haspel briefed a small group of senators behind closed doors last week about that report, and a number of senators are eager to take action.

President Trump and his Cabinet members have frustrated those lawmakers, however, by highlighting the economic benefits of having an alliance with Saudi Arabia as opposed to rebuking the kingdom over Khashoggi’s death. Trump has said there is no definitive evidence of the Saudi crown prince ordering the killing.

Republicans have also been urging the Trump administration to drop talks surrounding a nuclear deal in light of the slaying.

Perry also traveled to London earlier this year with his wife, Anita, to discuss the deal — which could be worth tens of billions of dollars and allow nuclear reactors using American technology to be built in Saudi Arabia (Greenwire, Nov. 1).

The Atomic Energy Act requires an agreement under Section 123 in order for the United States to participate in peaceful uses of nuclear power with another country.

Separately this week, the Trump administration joined with Saudi Arabia and Russia to sideline climate science in U.N. negotiations in Poland, angering nations that say urgent action is needed for their survival (Climatewire, Dec. 10).

But not all lawmakers were concerned with Perry’s jaunt overseas.

Casting support yesterday for the DOE chief’s trip was Republican Sen.-elect Kevin Cramer of North Dakota, who said it was "more appropriate than ever" for the United States to work on its relationship with the kingdom.

"To the degree that something has to be done — and I think something does have to be done with the obvious issue of the day out there — we still have to continue to shore up the relationship, and I think that gives us leverage to inflict a little discipline at the same time," he said.

Cramer also applauded Perry as a "great diplomat," indicating the former governor of Texas may be the ideal candidate to smooth things over with the Saudi kingdom.

"Rick Perry is nothing if not a great diplomat. He is a diplomat’s diplomat in terms of his personality. And he has some leverage," said Cramer. "I think it’s fine he’s over there. I obviously don’t know every detail that they are discussing. I don’t think we should avoid Saudi Arabia."