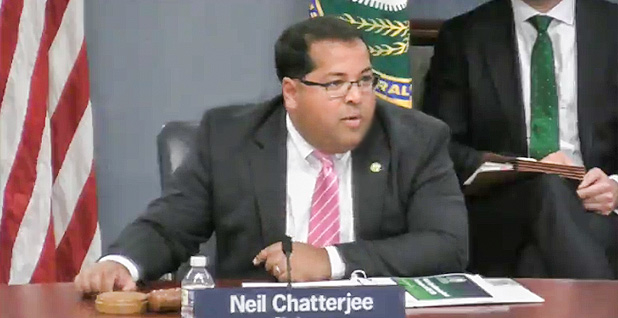 After hearing a staff report downplaying potential winter grid problems, FERC Chairman Neil Chatterjee declined to say whether he thinks there is a "crisis at hand" in energy markets, as the Department of Energy has warned. "We need to constantly be vigilant and monitor the grid,” he told reporters. FERC

This winter will likely bring few major risks to energy markets, with predicted warm weather meaning moderate demand for fuel and electricity, Federal Energy Regulatory Commission staffers said today in a report challenging the accelerated timeline for a grid rule proposed by the Department of Energy.

"At this time," FERC staff told the commission, "we do not see major risk factors that would likely lead to significant market disruptions during this winter."

The reliability of the wintertime grid has been the focus of regulators and operators since 2014, when a polar vortex and extreme cold snaps strained the power industry.

"Weather forecasts call for warmer than normal winter temperatures that look to moderate demand in the most sensitive markets, for example the Northeast, during the upcoming season," FERC staff wrote.

"In the electric markets, electric capacity is sufficient in all regions based on current load forecasts," they said.

Executives from six grid operators overseen by FERC also said they are prepared for this winter and are not anticipating significant problems.

The reports come amid debate over a proposed FERC rule from Energy Secretary Rick Perry that would compensate coal-fired and nuclear power plants with the aim of increasing grid resilience.

Perry justified a tight, 60-day timeline for FERC action on the proposal by saying the commission should act "before the winter heating season begins so as to prevent the potential failure of the grid from the loss of fuel-secure generation." FERC has agreed to follow Perry’s timeline.

After a public meeting at commission headquarters, FERC Chairman Neil Chatterjee declined to say whether he thinks there is a "crisis at hand" as DOE has warned.

"We need to constantly be vigilant and monitor the grid, monitor market changes to ensure that this winter and beyond we don’t have circumstances that could lead to catastrophic outages," Chatterjee told reporters.

FERC commissioners have said they don’t plan to take an action that would rattle energy markets and promise policies will remain "fuel-neutral."

Chatterjee has also said the commission has many options for taking action within 60 days beyond simply approving or rejecting DOE’s proposed rule — including starting fresh with a new proposed rulemaking (Greenwire, Oct. 13).

FERC today also announced a new policy on hydropower licensing, establishing 40 years as the default length for licenses it issues for projects. The default permit length is up from 30 years.

The new policy is also flexible. FERC will consider issuing licenses that are longer or shorter if developers meet certain conditions.

"As an industry, we believe FERC’s decision to establish a 40-year default term for hydropower licenses is a significant improvement over the status quo and increases certainty within a process that too often takes a decade or more," said LeRoy Coleman, a spokesman for the National Hydropower Association.

"We’ve seen firsthand that the current license term policy can unduly influence and delay the timing and scope of project improvements and environmental enhancements, and the clean energy benefits they provide to the grid. We commend FERC for addressing the problem. This is a win-win for clean energy, the grid and the environment," Coleman said.