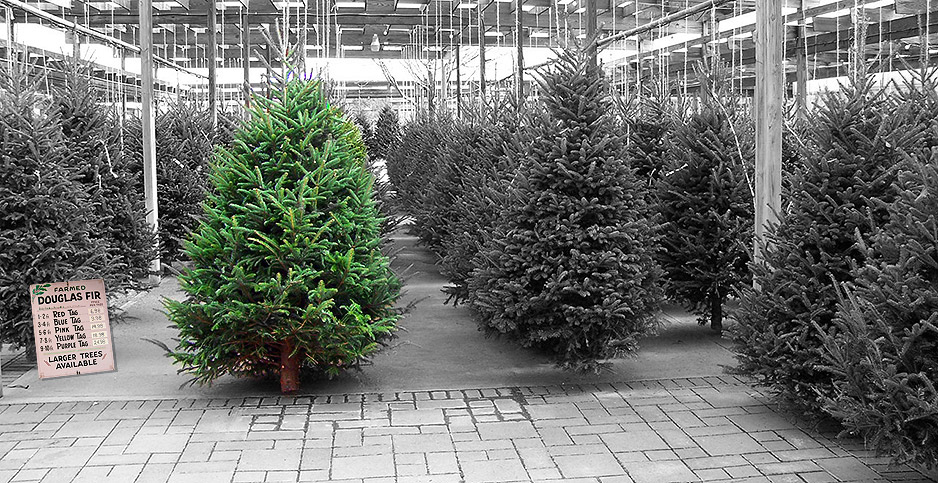 Thanks to the Trump administration, farmers who raise Christmas trees are feeling a bit merrier this holiday season.

Christmas tree growers, like many other agricultural producers, have benefited from Trump EPA actions to roll back Obama-era pesticide restrictions that environmentalists support.

"This is one of the best years we’ve had in the last 30 years," said Chal Landgren, a Christmas tree specialist at Oregon State University. "Anyone with trees has been pretty well able to sell them."

Landgren attributes most of that good fortune to the declining number of people and acres devoted to growing Christmas trees, a U.S. Department of Agriculture-graded agricultural product that includes red firs, white pines, blue spruces and many other coniferous species.

Yet in addition to less competition, the remaining Christmas tree farms — only a handful of which are certified as organic by USDA — benefit from the ability to continue using highly toxic pesticides like chlorpyrifos.

"When you have to spray for insects, chlorpyrifos is one that gets used," Landgren said.

"This year, most growers did spray. But last year, it wasn’t common to have to spray — for aphids anyway," he said, referring to a small, sap-sucking insect that feasts on many conifer species. "And chlorpyrifos is one that’s probably most commonly used for aphids."

Landgren noted that chlorpyrifos is applied to Christmas trees during the summer, which means most of the pesticide is likely to wash away by the time consumers purchase the trees.

Chlorpyrifos works by blocking an enzyme that controls messages sent between an insect’s nerve cells. The blockage causes the nervous system to malfunction and eventually kills the pests exposed to it.

But public health researchers have found that the insecticide also interferes with brain development of fetuses and children who are exposed to it. And EPA has determined that chlorpyrifos likely harms 97% of animals and plants protected under the Endangered Species Act (Greenwire, April 7, 2016).

As a result, the Obama administration sought to fully outlaw the use of chlorpyrifos. Most indoor applications of the pesticide were phased out in 2000.

The Trump EPA, however, blocked the proposed rule from taking effect and has decided instead to continue studying the health effects of the neurotoxic pesticide (E&E News PM, July 18).

Going forward, EPA has other treats in mind for Christmas tree farmers and other agricultural producers, some of whom have been badly hurt by the Trump administration’s protectionist trade policies. Unlike farmers who grow cotton, rice, wheat or other export-dependent agricultural crops, Christmas tree growers have been largely unaffected by President Trump’s tariff disputes with China, the European Union and other trading partners.

EPA has proposed reducing restrictions on when and where pesticides can be sprayed by Christmas tree farmhands and other field laborers.

The agency is seeking changes to agricultural worker protection standards that would shrink the so-called application exclusion zone around pesticide applications. Under the proposal, the zone — which currently extends as much as 100 feet in all directions from where certain pesticides are applied — would reach only to the border of a farmer’s property.

Critics say the move could leave farmhands and others who live, work or play near agricultural fields at greater risk of incidental pesticide exposure.

The EPA spokesperson emphasized that the agency hasn’t reached a decision on the draft rule but argued that "the existing off-farm requirements are duplicative and nearly impossible to implement for applicators and to enforce by state [regulators]." Farmers would still be prohibited from spraying if they have "reason to believe that workers or bystanders may be contacted by a pesticide during a pesticide application," the statement added.

Yesterday, the agency also unveiled an atrazine proposal that would allow 50% more of the widely used, endocrine-disrupting herbicide to end up in waterways.

Banned in Europe due to its links to birth defects and cancer, atrazine is mainly applied by corn, sorghum and sugar cane farmers. But Christmas trees growers and other agricultural producers rely on it as well (Greenwire, Dec. 19).

While many Christmas tree farmers are happy with the Trump administration’s pesticide policy changes, most environmentalists are not.

"I’m very frustrated that EPA is allowing these very harmful pesticides to be used on Christmas trees and other agricultural and nursery crops," said Nathan Donley, a scientist at the Center for Biological Diversity. "We really need much stronger regulations to ensure that we can celebrate whatever holiday we wish to in a safe manner."