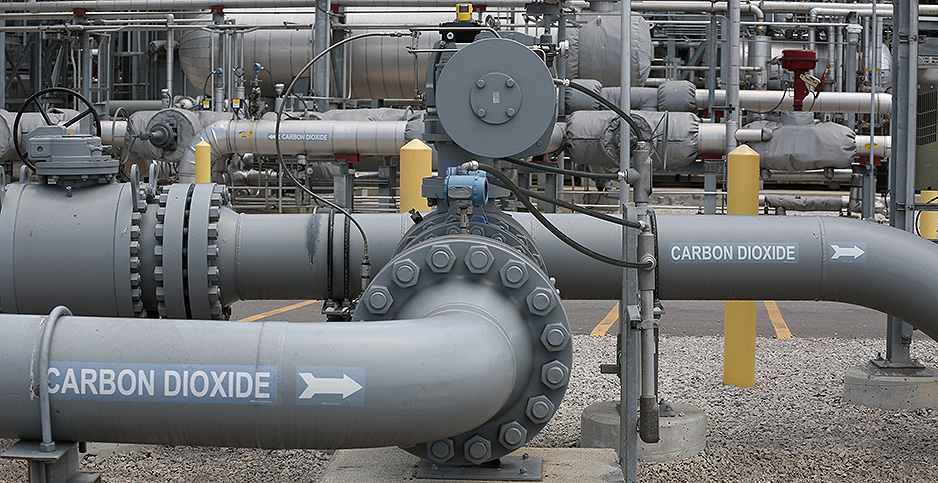 When news broke this summer that the Petra Nova carbon capture power project was offline, advocates leapt to the defense of the Texas facility, one of the largest in the world.

Petra Nova has not sent captured carbon dioxide to an off-site oil field in over four months, though its backers say the retrofitted coal plant surpassed capture targets before halting operations and, notably, was built on time.

Even so, the pioneering facility’s mothballed status — the result of low oil prices amid the coronavirus pandemic and the fallout of a global trade war — is prompting some carbon capture proponents and developers to reexamine project revenue streams and how best to hedge against swings in the price of oil.

Boosting the number of coal plants with carbon capture is seen as one way to battle climate change. Yet even before Petra Nova went offline, the capture capacity of the two large-scale power projects in operation was "well off track," according to a June report from the International Energy Agency. With Petra Nova’s carbon capture on hold until economies improve, some onlookers say the need to safeguard projects in development from pitfalls is increasingly important.

"We are clear that we need carbon capture in a comprehensive decarbonization strategy by midcentury," said Mahmoud Abouelnaga, solutions fellow at the Center for Climate and Energy Solutions (C2ES). "As long as we now admit the need for that, that means we need to make sure that the business model that can enable carbon capture to participate in the portfolio of technologies is as risk-free as possible."

While the economics of Petra Nova give reason for caution, a number of coal plants and project developers are still considering carbon capture to offset their emissions, especially in a power sector that is increasingly focused on natural gas and renewables.

Recent rolling blackouts in California have served as a point of discussion for carbon capture and whether coal could help solve issues in a renewable-heavy portfolio (Energywire, Aug. 20).

Akshaya Jha, an assistant professor of economics and public policy at Carnegie Mellon University’s Heinz College, said coal isn’t what he’d think of as a fill-in technology — typically, that’s natural gas, which can be used to ramp up more quickly.

"Carbon capture, in terms of being economic, I don’t really see it for coal-fired power plants just simply because there’s no federal carbon regulation in place," he said.

But supporters of the industry see a place for their efforts, which are backed by a federal tax credit known as 45Q. And the West Coast fits into that discussion.

"We would love to provide the decarbonized baseload power to keep the lights on in California," said Peter Mandelstam, chief operating officer of Enchant Energy Corp., which is pursuing a carbon capture project in New Mexico.

Roughly 3 ½ years after it began operating, Petra Nova hit pause on May 1 and co-owner NRG Energy Inc. halted delivery of CO2 to an off-site oil field, where it was being used for enhanced oil recovery in which NRG has an interest.

The company, which is based in Houston and New Jersey, told E&E News in July that a drop in the price of oil — which sat above $60 a barrel at the start of the year but briefly went negative in April — was the culprit (Energywire, July 31).

Pat Hammond, an NRG spokeswoman, did not say if NRG has a specific oil price range in mind to make the economics of Petra Nova work.

While Petra Nova’s capture facility is still offline, carbon capture supporters say it is not because of faults with the technology. The project remains a pioneer in carbon capture, utilization and storage, which is commonly referred to as CCUS.

David Greeson, a former vice president at NRG who helped develop Petra Nova, said he doesn’t consider the project a commercial success. But he said it was a "raging success" at capturing carbon.

Greeson now consults on a carbon capture project in North Dakota, and he noted the lack of a targeted federal tax credit to help Petra Nova as he worked to develop its revenue stream.

Oil prices have been on a roller coaster since, with oil benchmarks recently trading around $40 a barrel.

Greeson recalled that oil hit $100 a barrel before the financial close of the Petra Nova deal in 2014, and he said plans factored in a potential $75 oil price.

The oil field did not react to CO2 the way backers had hoped, according to Greeson. Instead of 60 million barrels over a decade, it may take 20 or 30 years to produce that, he said.

Still, he suggested that "if oil was $75, they’d still be running" Petra Nova.

Deepika Nagabhushan, program director of decarbonized fossil energy at the Clean Air Task Force (CATF), said Petra Nova is successful in the sense that it demonstrated carbon capture technology on a commercial scale — capturing 92.4% of CO2 over its life span — and has brought down costs for other projects in the works.

"I think it has already delivered a lot for the future application of this technology," she said.

Rich Powell
, executive director of conservative nonprofit ClearPath
, said Petra Nova has also proved to be a more cost-effective proposition than some other policies aimed at curbing CO2 emissions.

Even if the facility never resumed operations, Powell said, the project is less expensive than some other programs aimed at lowering emissions. With a nearly $200 million investment from the Department of Energy, the project captured CO2 emissions at a rate of approximately $55 to $60 per ton, he said.

"If we’re able to get the incentives right to keep CCS [carbon capture and storage] projects running in the long term, we could see a pathway running toward really cost-effective ways of managing CO2," Powell said.

Hammond, the NRG spokeswoman, did not say whether or not NRG was planning to use the 45Q tax credit, but said project sponsors "will consider all options to improve the economics of the facility."

Of the 32 publicly announced CCS projects in the United States, roughly half are for the power sector, according to a list maintained by CATF.

While several projects are still looking to use captured CO2 for enhanced oil recovery — as Petra Nova did — some are considering dedicated storage in saline formations, either in addition to EOR or exclusively.

Under the 45Q tax credit, companies can receive up to $50 per metric ton of CO2 that’s captured and stored securely underground — known as "secure geological storage" — and up to $35 per metric ton for EOR.

Dedicated storage in saline formations doesn’t have to contend with the same uncertainties as EOR projects that are tied to fluctuations in the price of oil, Nagabhushan said, but, historically, there has been less interest in saline or other forms of geologic storage.

EPA has only received eight permit applications since July 2011 for Class VI wells, which are used to inject CO2 into underground formations for geologic sequestration (Energywire, Sept. 8).

Regardless, carbon capture proponents say taking advantage of the 45Q tax credit will be a key difference maker for many projects if they can meet a crucial deadline. Those looking to use the credit must start project construction by the end of 2023, a cutoff point that advocates including the Carbon Capture Coalition are lobbying Congress to extend.

An additional mechanism that could allow more CCS projects to succeed are government policies that could help to build out CO2 pipeline networks and storage sites, analysts say.

Doug Vine, a senior energy fellow at C2ES, said the idea of a CO2 network is comparable to the national highway system or the internet and commerce.

"In order to have a more robust carbon capture network, we need a pipeline system," Vine said.

That title belongs to Boundary Dam, which is operated by SaskPower, a Canadian utility company headquartered in Regina, Saskatchewan.

Boundary Dam has an independent buyer for the CO2 used to boost oil recovery. The facility also sends CO2 to a storage site — Aquistore.

Norm Sacuta, communications director at the Petroleum Technology Research Centre in Regina, said the majority of CO2 captured at Boundary Dam goes to the Weyburn oil field, which also takes CO2 from a coal gasification facility.

"Except for a recent shutdown at Boundary Dam in May-June for regular maintenance at the plant, CO2 continues to be captured and shipped to the Weyburn field," Sacuta said in an email.

SaskPower spokesman Joel Cherry said carbon capture is part of the utility’s strategy to reduce its greenhouse gas emissions 40% from 2005 levels by 2030. He also said carbon capture will help the Boundary Dam facility avoid a government-mandated phaseout of traditional coal-fired electricity by 2030.

"This facility would be able to continue operating beyond 2030, despite it being a coal-fired facility because of this carbon capture and storage facility there," he said.

A number of other projects are on the drawing board, including by Enchant Energy at a generating station in New Mexico and Project Tundra at a plant in North Dakota.

"At Tundra, we plan to build on the learnings from those brave souls that went before us," said Greeson, who’s now president of Proven Project Development Group, which is consulting on the project.

Greeson said Tundra doesn’t plan to rely on oil production and pricing to support the project. But the plan does call for using the 45Q program.

Project Tundra is a $1 billion project that aims to capture 100% of flue gas from a 455-megawatt system. Technology then can capture 90% or more of the CO2 in the flue gas. The power plant runs on lignite in North Dakota, and the project includes a plan to store CO2 under the nearby mine. The carbon capture system could be operating in 2025.

In New Mexico, Enchant Energy’s Mandelstam described 45Q as the make-or-break element of carbon capture in the coming years. He said Enchant Energy’s project associated with the San Juan Generating Station, which currently has an 847-MW capacity, would involve about $1.3 billion of risk capital before a nickel of 45Q credits would be received under the current setup.

Enchant Energy is counting on a few buckets for potential lifetime revenue for the San Juan project, according to Mandelstam. Over 12 years, that would mean about 40% from selling electricity, 20% from CO2 sales and 40% from 45Q. Enchant Energy could also seek an enhanced oil option or put CO2 directly into the ground. The carbon capture project could start initial operations in 2023.

Oil prices consistently below $40 a barrel would not support enhanced oil efforts tied to San Juan, Mandelstam said. But if wells are converted broadly to act as injection wells, he said, that’s good for the carbon capture industry.

Greeson said Tundra is not competing with other carbon capture projects.

"We’re all cheering each other on because the more each of us is successful, the more access to capital we believe all of us will have in building these projects in the future," he said.

Greeson said most companies investing in developing carbon capture believe that decarbonizing products will be worth more in the future.

He said there’s no technology without a carbon footprint, and he argued that the United States can show the world how to drive down costs on carbon capture and how to do saline storage.

"Coal can be a part of the solution in the future," Greeson said. "We have the technology. People love technology to solve problems."