PFAS are in face masks. Should you be concerned? 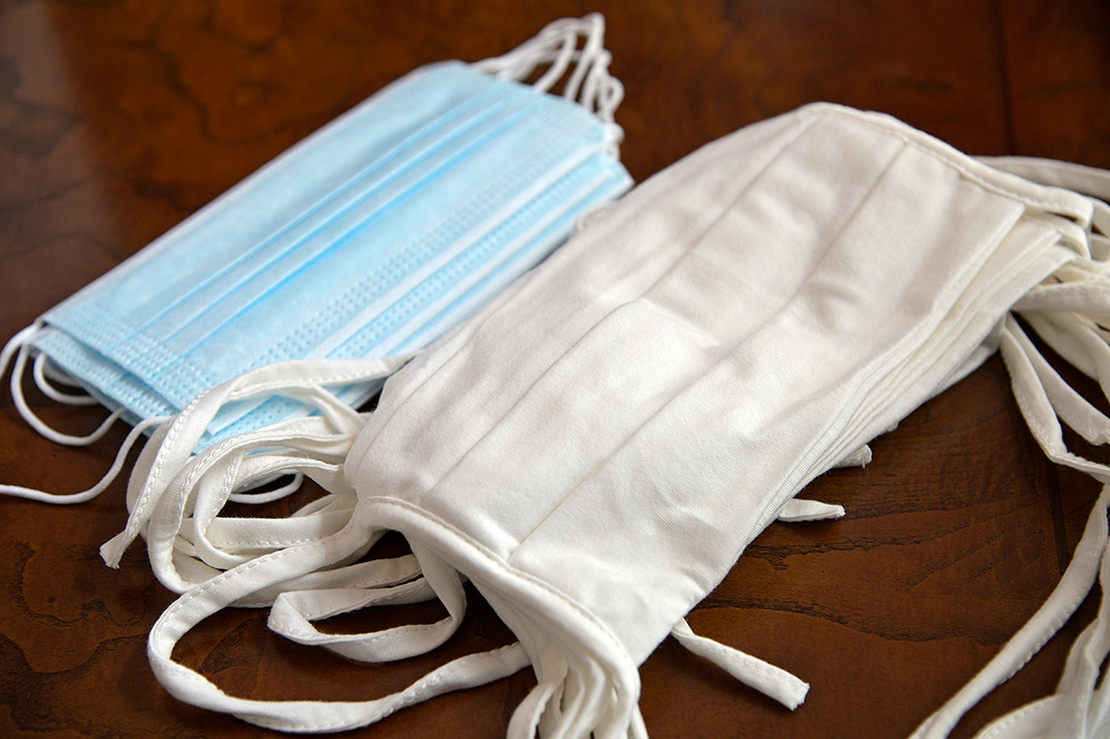 Cloth and disposable face masks are viewed as part of packages handed out to small businesses in July 2020 in Orlando, Fla. Phelan M. Ebenhack via AP

People may be unknowingly exposing themselves to a controversial group of toxic chemicals as they take steps to protect against the coronavirus.

New data published recently confirms that so-called forever chemicals are present in some face masks, including the kind used to protect people from Covid-19. While there have been prior confirmations that the chemicals, also known as per- and polyfluoroalkyl substances, or PFAS, are in face masks, the findings reinforce the challenges consumers face as they wait for EPA to crack down on the substances.

Published in the American Chemical Society’s Environmental Science & Technology Letters, the data offers some reassurance for the general public; the study’s authors concluded that most face masks tested were not a major source of PFAS exposure.

“We didn’t really find a real smoking gun,” said Graham Peaslee, a professor of physics and biochemistry at the University of Notre Dame who has spent years researching PFAS.

An author on the study, Peaslee said that the findings were reassuring in that sense. But he also said the testing raised questions.

Despite being a “very small study” that would need to be massively expanded for a true sense of the results, Peaslee found the consistent presence of PFAS in masks was notable. Those items are worn regularly and then sent for disposal — leading to more PFAS in the environment and raising exposure levels for the public.

Using mass spectrometry, the researchers tested nine types of face masks for PFAS. Those tested included six reusable cloth masks, along with a surgical mask, an N95 mask and a heat-resistant mask meant for firefighters.

Drawing on animal studies to determine health problems based on chronic exposure, the researchers found that most of the masks would not exceed the dose considered safe. The exception was the mask marketed to firefighters, which exceeded the dose when worn for 10 hours.

Courtney Carignan, an exposure scientist and environmental epidemiologist who teaches at Michigan State University, conducted the exposure and risk assessment portion of the study. She emphasized the nuance inherent in the results.

“Exposures from masks are small compared to other pathways such as drinking water,” Carignan said, as she underscored the importance of wearing masks during a pandemic.

But she also acknowledged other concerns. For example, the study noted exposure and risk appeared higher for children, while extended periods of physical activity when masked could also increase the chance of inhalation exposure.

“Several reviewers were concerned that the worst-case scenario I modeled, a toddler wearing a mask all school day, is not realistic,” Carignan said. “However, it’s what my children and many others have been doing for over a year now. Most parents would likely prefer their child’s mask be free of any hazardous substances.”

The study sheds light on an area that has at times drawn scrutiny.

Last summer, E&E News reported that PFAS were in some masks, with the company 3M Co. confirming the chemicals are used in certain face coverings. At that time, a number of Republican lawmakers were citing the presence of PFAS in personal protective equipment as a key reason not to enact legislation targeting the compounds (E&E Daily, July 13, 2021).

And the reality of PFAS in masks has proven tricky to navigate for some of the loudest voices calling for a crackdown. Industry members have repeatedly argued that the chemicals are key for a range of items, from solar panels used to combat climate impacts to critical equipment used to stem the pandemic. Many scientists and public health experts have also emphasized that protection against Covid-19 outweighs any concerns about exposure.

Peaslee said the scientists conducted their research closer to the pandemic’s beginning, but refrained from publishing the findings as they grappled with ethical concerns. Having found PFAS in the masks, they worried the results could be weaponized to deter the use of a highly valuable tool for combating the coronavirus.

Trace amounts of PFAS were already known to appear in certain masks, including on the headbands of some models of 3M’s standard N95 respirators, due to processing aids. In some instances, PFAS may not even be intentionally added to the products that contain them. The chemicals are widespread throughout manufacturing and the environment and appear in remote parts of the world, as well as in human blood. That reality has prompted the beginnings of a crackdown from EPA, which is in the process of regulating two of the compounds in drinking water, with more regulations soon to come (E&E News PM, Dec. 20, 2021).

Carignan noted the compounds might be getting into some masks through their use in textiles. And Peaslee observed that cheaper disposable masks appeared less likely to have PFAS. By contrast, more tailored and costly masks, like the kind marketed to firefighters, seemed to have higher levels of the chemicals.

In a statement, the American Chemistry Council emphasized the use of PFAS in life-saving items as a measure of their worth.

“PFAS chemistries have played a significant role in the fight against COVID, through their use as a protective shield in masks and medical garments, but also for their use in COVID testing equipment and to help aid vaccine delivery,” the powerful trade organization said in an unattributed comment via email. “PFAS chemistries are critical to many of the most pressing challenges of the day, such as being integral to sustainability efforts, semiconductors, and supply chain resiliency, and policymakers need to consider the implications of broad brush PFAS restrictions on our nation’s policy objectives.”

ACC further stated that “all PFAS chemistries are not the same. Individual chemistries have differing health and environmental profiles, and it’s misleading to suggest that the mere presence of a PFAS chemistry is an indication of risk.”

While the study’s findings help downplay any concern about heightened exposure through masks, however, they do add further fuel to pleas from consumer advocates.

PFAS are widespread across consumer products, but their presence is rarely advertised to the public. An E&E News review of advertising around nonstick pans last year found that many companies mislead consumers about whether the chemicals are in their products (Greenwire, March 24, 2021).

While EPA has singled out the chemicals as a “top priority,” impacted communities and advocacy have argued the agency should be moving more quickly. Other parts of the government, like the Federal Trade Commission and the U.S. Food and Drug Administration, have meanwhile come under fire for doing little to nothing about the issue (Greenwire, March 24).

Many advocates believe consumers deserve to know what chemicals they are exposed to, especially if they are controversial or linked to health impacts. Sydney Evans, a science analyst with the Environmental Working Group, also queried why PFAS might be in masks to begin with.

“Masks are essential, especially during a pandemic, to protect public health,” she said. “And that protection should not come at the cost of other chemical exposures and health risks.”

Specific chemicals detected by the researchers are also notable. Traces of the compound PFOA, which EPA has singled out as a likely carcinogen, were found in almost all of the masks. Levels of one fluorotelomer alcohol were the highest the study observed, and Carignan noted that compound can transform into PFOA.

Peaslee found the PFBA results disconcerting. “I think that’s an alarming discovery,” he said, observing the research around that compound and its relationship with the coronavirus.

Another area of concern explored in the study is disposal. The chemicals abound in waste sites due to their presence in so many products. With masks now much more likely to be sent to a landfill or an incinerator, the new findings probed whether that might lead to more PFAS being disposed of.

Even after assuming a 100 percent chance of leaching and accounting for annual disposal of around 29 billion and 91 billion masks, the researchers concluded they would contribute only an additional 6 percent in annual PFAS mass loads. That amount pales in comparison to the amount of the chemicals released in landfill wastewater in recent years, they observed.

Still, Evans said the disposal component of the findings further strengthened arguments for keeping PFAS out of the waste stream.

“In terms of disposal, it might not seem like a big issue, but it demonstrates one more example of how common PFAS are in our everyday products,” she said. “PFAS enter the environment not just from the disposal phase of their life-cycle, but also during production.”

Peaslee also emphasized disposal issues and reasons for caution beyond the results of the study. He noted that fluorination did not appear necessary for masks to serve their purpose, indicating that people might be exposed to chemicals with no clear benefit.

When those items are not in use anymore, he added, they will be added to a growing waste footprint that quickly translates into more PFAS exposure through pathways like water.

“We should be more cognizant of how we treat the planet,” Peaslee said. “We are putting things out there that are going to be there forever.”