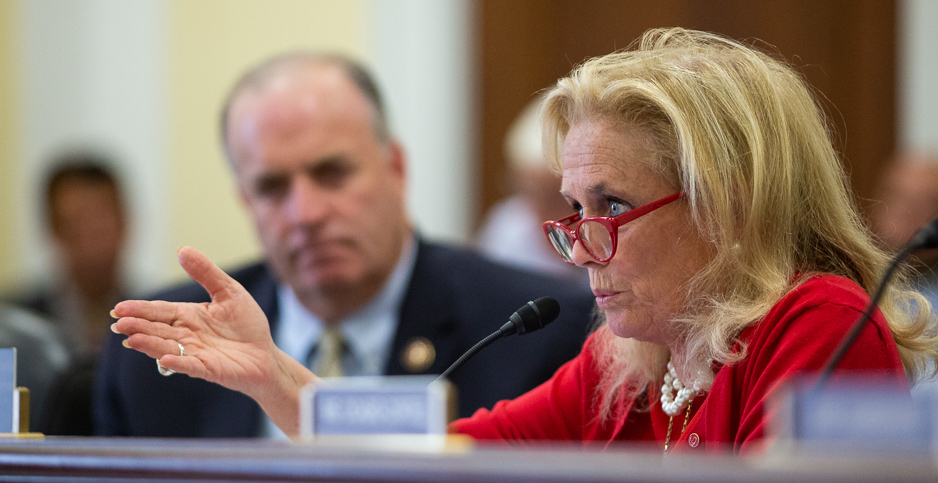 The House will soon vote on Rep. Debbie Dingell’s (D-Mich.) bill to regulate "forever chemicals," which have set off legal battles in courts across the country. Francis Chung/E&E News

The House is expected to vote by the end of the week on a bill to regulate the "forever chemicals" that have been at the heart of a bevy of legal challenges across the country.

President Trump has said he would veto the PFAS bill if it passes the House and the Republican-controlled Senate (E&E Daily, Jan. 8).

"As the public and regulators and various state agencies and local communities are finding out and understanding more about the nature and extent and scope of PFAS exposure, we are seeing a steady increase in the number of claims that are being pursued in court through litigation," said Rob Bilott, a Taft Stettinius & Hollister LLP attorney who is known for bringing PFAS concerns into the spotlight through his work on a class-action water contamination lawsuit against DuPont Co.

The saga was recently documented in the film "Dark Waters," starring Mark Ruffalo.

Federal regulation of PFAS would have variable impact for litigation over the chemicals, which are used in products ranging from nonstick cookware to firefighting foam and have been linked to health problems such as cancer, legal experts say.

"There’s a lot of fear associated with PFAS because people don’t know very much about it," said Stephanie Feingold, a partner at the law firm Morgan Lewis. "They don’t know much about the potential health impacts because the science hasn’t been developed."

Lawsuits over PFAS tend to crop up when the chemicals are detected in water supplies or an individual’s bloodstream, she said, but the argument the defense always raises is: So what does that mean?

"Until those questions are settled, I think we’re going to see a lot more suits," Feingold said.

While federal rules on PFAS could provide new footholds for legal challengers, many court watchers say litigation over the chemicals has proliferated to fill the regulatory void.

"One of the reasons the regulatory landscape is so complicated is we start out with PFOA and PFAS at the litigation level," said Ann Al-Bahish, a partner at the law firm Haynes and Boone LLP.

"That’s especially going to be the case because we don’t have the regulation."

Individuals, municipalities and water districts have raised the alarm in court over the costs of addressing PFAS in their bodies, property and infrastructure.

A new set of legal wrangling has recently emerged in the form of challenges by farmers who have used PFAS-contaminated sludge and now find traces of the chemicals in the milk of their livestock.

Similar complaints have cropped up in a lawsuit by Pennsylvania residents concerning chemical releases from a pair of naval facilities near their property.

A federal judge in the case Kristen Giovanni v. U.S. Department of the Navy declined the Navy’s request to delay the case while state and federal regulators decide whether to regulate PFAS chemicals as hazardous substances.

Oral argument on the Navy’s motion to dismiss the case took place today.

State attorneys and regulators are also taking chemical companies to court to force them to contend with the presence of PFAS in the environment.

Unlike the 2018 lawsuit Michigan Department of Environmental Quality v. Wolverine Worldwide Inc., which targeted PFAS pollution associated with solid waste transportation and disposal at a collection of facilities, a recent spate of state lawsuits are not necessarily site-specific, said Feingold of Morgan Lewis.

The New Jersey Department of Environmental Protection raised claims last year against DuPont, Chemours Co. and others for making and selling firefighting foam containing PFAS for years, despite knowledge about the dangers of the chemicals.

Bilott’s high-profile case against DuPont is just one example of private parties seeking damages for personal injuries or property damage from PFAS exposure.

Another key dispute is Hardwick v. 3M Co., in which a federal judge in Ohio allowed former firefighter Kevin Hardwick and others to pursue their claims that 3M and other firms allowed the public to serve as "human guinea pigs in a decades-long experiment" on the health effects of PFAS.

They have asked industry to fund research on the health effects of their exposure to the chemicals.

Bilott represents Hardwick in the case.

Many states have stepped in to regulate PFAS chemicals as federal action remains stagnant.

Those state-level rules have opened the door to legal challenges from industry, such as a state court lawsuit by 3M, farmers and local water officials challenging New Hampshire’s thresholds for PFAS in drinking water.

The challengers called the state limits "unfunded mandates" that did not consider the costs of compliance for regulated entities.

Any rules the federal government introduces would likely be subject to similar challenges, legal experts said.

"The regulated entities are not just sitting back," said Feingold. "All these states are rolling out new standards, and we’re starting to see a little bit of pushback."