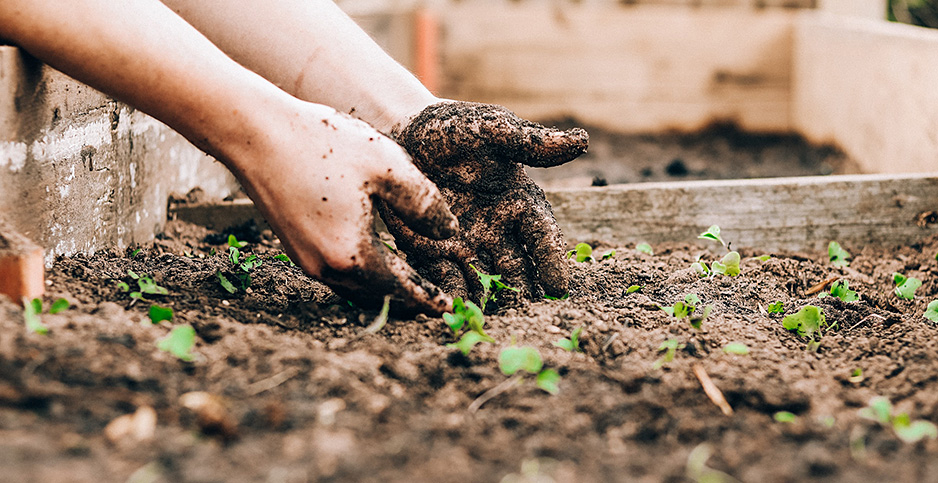 A person tending to a home vegetable garden. Sandie Clarke/Unsplash

"Forever chemicals" have made their way into widely available fertilizers used in home gardens, according to a new study out today that warns of stark implications for human health.

Samples taken from nine different widely available fertilizers used for home gardening contain per- and polyfluoroalkyl substances, according to the findings from the Ecology Center in Ann Arbor, Mich., and the Sierra Club. Eight of those nine fertilizers exceeded PFAS screening guidelines established by Maine, the state that has taken the most sweeping actions on PFAS in agricultural land application.

The report traces the chemicals back to biosolids — the nutrient-rich organic matter left over following traditional wastewater treatment practices. Fertilizer products are commonly made using that waste.

Researchers tested for 33 different PFAS in each of the home fertilizers, finding 24 of those total. Each fertilizer contained between 14 and 20 PFAS compounds. They also showed two to eight times greater mass of precursor compounds — which break down into other PFAS — along with "hundreds to thousands" of other unidentified fluorine compounds.

Sonya Lunder, senior toxics adviser for the Sierra Club and a report author, said that the products are marketed as being "organic" or "eco-friendly," but that the presence of the PFAS raises concerns.

"This home use on foods that people eat raw is a particularly egregious thing," Lunder argued in an interview, noting people might consume raw items like lettuce grown in a garden containing those fertilizer products. "That this could be called ‘organic’ is troubling."

A former director of the National Institute of Environmental Health Sciences and the National Toxicology Program, Linda Birnbaum, said in a statement that the discovery should put more pressure on federal regulators. "The EPA needs to take immediate action to prevent the reckless contamination of our food and water, soil and air by limiting the use of PFAS chemicals wherever possible," said Birnbaum.

PFAS are a family of thousands of chemicals, only some of which have been closely studied. They do not break down in the environment, and several PFAS have been repeatedly linked to cancer, kidney problems and other health issues. The new findings come as EPA weighs cracking down on PFAS, an issue Administrator Michael Regan has called a "top priority."

Much of the agency’s focus has been on drinking water, but advocates hope the new report will draw attention to issues like the presence of PFAS in the waste stream, given some EPA scrutiny of PFAS disposal (Greenwire, Feb. 24).

Biosolids are often applied to farmland and other areas in need of fertilizer, a process that reduces costs for water utilities and helps farmers, in addition to recycling waste that would otherwise be hauled away for disposal. The waste industry, local governments and other stakeholders are supportive of the practice, while some environmental groups maintain that biosolids application poses a health hazard. EPA has identified a number of chemical pollutants in biosolids, including PFAS and polychlorinated biphenyls, or PCBs.

Researchers behind the new study say their findings underscore misgivings about biosolids usage. A family of thousands of chemicals, PFAS are prized for their nonstick properties. But they are virtually impossible to avoid in the waste stream due to their presence in a flurry of products, from dental floss to cellphones. That reality means they can be found in essentially all biosolids, according to multiple industry experts.

The report advises against purchasing "biosolids-derived fertilizers for use on fruit and vegetable beds" given the potential for human consumption.

"Available evidence suggests that PFAS and related chemicals in sewage sludge could jeopardize the safety of the commercial food supply and home gardens," the report said.

PFAS in biosolids have sparked panic in states like Maine, where contamination led to aggressive screening requirements for biosolids on agricultural fields — including for PFOS at 2.5 parts per billion and PFOA at 5.2 parts per billion. That effectively established a biosolids application ban on some of those lands, according to members of the waste industry.

Other states have eyed similar steps, including Michigan, which has scrutinized PFAS in wastewater, as well as Massachusetts, New Hampshire and Vermont.

But simple solutions to the issue of PFAS in biosolids are "elusive," the report said, echoing some of what public utilities and the waste industry have long asserted.

Landfilling biosolids is costly and can be ineffective, as PFAS still come out in the liquid wastes produced by those sites. Meanwhile, incineration remains contentious — some research has indicated PFAS can escape and migrate during that process. Many incinerators and landfills are also near low-income communities of color, and advocates worry that biosolids disposal at those sites could have environmental justice implications.

"What we see writ large with disposal issues is that waste travels from more privileged communities to the most vulnerable areas," said Lunder. "That’s true across our waste systems."

Ultimately, the report lobbied for broader regulations on PFAS and a crackdown on the production of the chemicals to begin with.

"While this investigation highlights the challenges posed by wastewater disposal and biosolids reuse," the researchers stated, "it is important to note upfront that it is far simpler, less expensive and more effective to stop using the chemicals in most consumer and industrial uses, rather than attempt to contain and manage wastes."

Lunder also expressed hope that EPA would pay more attention to PFAS in biosolids, while assessing health risks differently than it often does for many other chemicals. She noted that dilution is often used to lessen impacts from toxic substances, including in biosolids, which are sometimes mixed with sand or other materials to reduce any risks.

"I think that mindset falls apart when you’re talking about chemicals that never break down," Lunder said.

Issues around biosolids are part of larger conversations playing out for local governments and the waste industry as they struggle with fallout stemming from PFAS contamination.

Public and private industry stakeholders have raised alarm over PFAS regulations, emphasizing that they cannot afford many of the costs associated with testing for and then treating the problem. Lobbying over the issue has increasingly pitted water utilities against advocacy groups (E&E Daily, June 11, 2020).

Some local governments and factions of the waste and water industries maintain that PFAS manufacturers should foot the bill for costs relating to cleanup. Companies involved in biosolids land application have also emphasized that they cannot completely remove PFAS from their products and that government-imposed level limits will put many out of business.

The Northeast Biosolids and Residuals Association, which serves the northeastern United States and Canada, has both pushed for a stop to nonessential uses of PFAS and argued that its members are falling victim to mistakes made by other industries.

"The most significant action we can all take is to support removal from commerce of chemicals of high risk," NEBRA notes on its website. "That reduces risks to human health — and it also reduces potential concerns related to wastewater, biosolids, septage, and other residuals."

"The presence of PFAS in biosolids does not mean there is a risk — that requires consideration of exposure routes and pollutant levels," Burke-Wells said. "The EPA has started the risk assessment process for PFAS in biosolids and we look forward to more definitive studies on this issue."

NEBRA’s special products manager, Ned Beecher, emphasized that even in Maine, many biosolids products and other PFAS-laden composts continue to be used despite the state’s screening levels. He added that the organization does support limitations on PFAS in commerce and agrees with those components of the report.