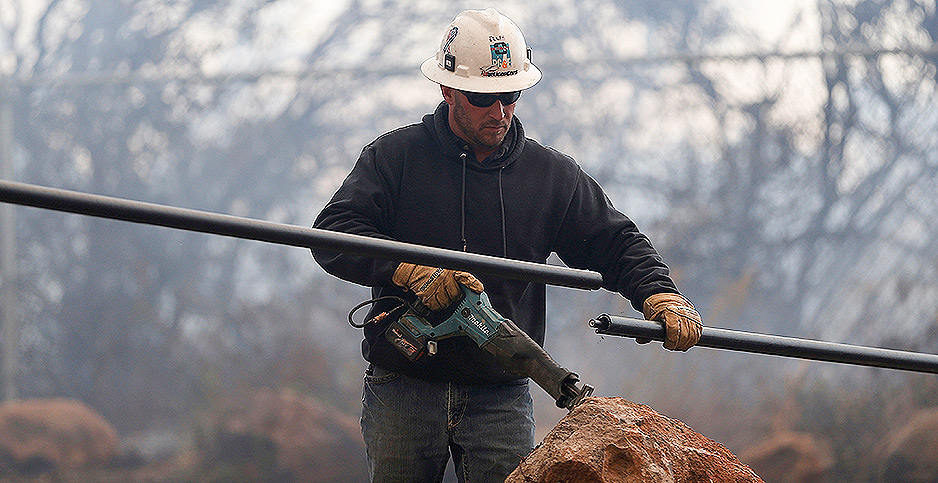 Lawsuits are stacking up (Energywire, Dec. 12, 2018). So are fire insurance claims. Companies paying those likely will seek reimbursement from PG&E if it’s officially blamed for the Camp Fire. The state’s inquiry is ongoing.

Last night the utility announced its CEO, Geisha Williams, was stepping down.

PG&E investors fear the worst. The company’s stock price has dropped 63 percent since November. Credit ratings groups S&P and Moody’s last week cut PG&E’s credit rating to junk status. The company has limited ability to raise new revenue and is "increasingly reliant on extraordinary intervention by legislators and regulators, which may not occur soon enough or be of sufficient magnitude," Moody’s said in its briefing.

PG&E after those ratings cuts could be forced to post at least $800 million collateral to back up current debts.

"At this stage it would be foolish to rule out a possible bankruptcy," Kit Konolige, senior analyst with Bloomberg Intelligence, said in an interview. "Investors and vendors and the company would certainly all prefer that the issues could be resolved outside of bankruptcy." But the math is "pretty straightforward," in terms of potential liabilities versus PG&E’s $1.7 billion annual income.

It takes place as severe wildfires, worsened by climate change, happen more frequently in the Golden State. Under California law, a utility is liable for property damage if its equipment caused a fire, regardless of whether there was negligence. On top of that, PG&E has a history of safety failures. Those factors combined raise questions about PG&E’s future stability, multiple analysts said.

"The expectation of future wildfire liabilities is much larger than any reasonable expectation of income that the company will generate," said Michael Wara, director of the Climate and Energy Policy Program at the Woods Institute for the Environment at Stanford University. "That’s not a company whose shares you want to own at all, and that’s the problem."

California Gov. Gavin Newsom (D) is considering how to respond. Newsom, who took office last week, on Thursday said he’ll have an announcement on PG&E "within the next few days."

While visiting a fire department in Colfax, Calif., a day earlier, Newsom told reporters it was his "role and responsibility" to protect Californian’s interests "and not PG&E’s interests, but sometimes those interests may align." Newsom, in a video posted by the local ABC affiliate, said that "we want a healthy utility. We want a utility that’s investing in the future, low-carbon, green growth strategies. That’s in an ideal world. That’s not the case today."

PG&E’s board of directors, meanwhile, is installing new directors at the holding company and the utility. A board statement said it’s seeking "to augment its existing expertise in safety, operations, and other critical areas." Three top electric executives leave at month’s end.

"Safety is and will continue to be our top priority as we work to determine the best path forward for all of our stakeholders," utility spokesman James Noonan said in an email. He said PG&E is committed "to doing everything we can to reduce the risk of future wildfires."

The repercussions of a PG&E bankruptcy would be far-reaching, experts said. For fire victims’ claims, "they’ll get cents on the dollar," Wara said. PG&E employee pension amounts also would get cut.

It additionally would hurt the state’s efforts to limit climate change. California for more than a decade has required utilities to make increasing amounts of renewable energy. A mandate effective this year seeks 60 percent green power by 2030. California’s electricity must go 100 percent carbon-free by 2045.

Of the state’s three investor-owned utilities, PG&E has signed the largest number of agreements to buy wind, solar and other sources of green power at set prices, Wara said. The value of those agreements would get whacked in bankruptcy court.

"That could be pretty destabilizing for the renewables industry in California," Wara said.

Bankruptcy also would hamper efforts to upgrade the grid, needed to add charging for more electric cars. PG&E would have trouble raising money to fund the costs, Wara said.

As well, legislation passed last year, S.B. 901, requires PG&E and other utilities to enact measures to reduce wildfire risks. Bankruptcy would limit funds for PG&E to do it, said Patrick McCallum, a lobbyist who works with the California-based survivors group Up From the Ashes, and himself a survivor of a 2017 blaze.

"Everybody gets squeezed," McCallum said. "It just means a lot less for safety, victims, and trying to create a non-carbon electric grid."

In a PG&E bankruptcy, the lights would stay on for the utility’s 5.4 million customers, but the state potentially would have to step in. That happened in 2001, when PG&E declared bankruptcy during the state’s energy crisis, and it was forced to buy electricity at high prices. Even before the filing, the California Department of Water Resources had to back electricity contracts, Wara said. That happened because power sellers feared they wouldn’t get paid by the utility.

Options for the state this time around include pledging to back any bonds PG&E sold to pay debts. That would allow them to be issued at a lower rate because the state has a better credit rating than PG&E, said lobbyist McCallum.

But the politics of the crisis are dicey, he said.

S.B. 901, the safety measure passed last year, also allows PG&E to bill ratepayers for wildfire liability costs if the expenses are "just and reasonable" after considering the utility’s conduct. It took effect this year, and applies retroactively to 2017. It does not apply to costs incurred in 2018.

Lawmakers are hesitant to make ratepayers foot a larger bill, McCallum said. The bankruptcy possibility is serious, he said, but "I don’t know even under that, that there’s the votes right now in the Legislature to do any more than they’ve done."

Anger over PG&E collecting for fire liabilities unfolded at a California Public Utilities Commission meeting Thursday. The agency voted to open a proceeding to implement S.B. 901. Commissioners ultimately will determine how much PG&E can raise customers’ rates to cover 2017 fire debts.

Activists lined up to condemn the utility. When CPUC President Michael Picker limited statements to one minute, speakers shouted after their microphones were turned off.

Legislature members, in terms of last year’s fires, are hesitant to intervene right now because they don’t know PG&E’s total liability, McCallum said. In addition to the Camp Fire, there’s still no official cause for the Tubbs Fire, a 2017 blaze in Sonoma County.

In addition, McCallum said, lawmakers are waiting for the "scrub analysis," which will say how much PG&E could pay through its insurance policies and by selling off assets.

Assemblyman Chris Holden (D) is considering a bill that potentially would let PG&E bill ratepayers for 2018 fire liabilities, McCallum said. But there’s not enough support for it right now, he added.

Garo Manjikian, Holden’s communications director, confirmed the assemblyman is considering a bill. As one hasn’t yet been offered, he said, "it’s beyond premature for vote counting at this point."

Holden in a statement said addressing the impact of last year’s deadly wildfires "will be a top priority" for Newsom and the Legislature. "Maintaining a reliable, safe, and affordable utility service for all Californians continues to be our ultimate goal," he said.

Cutting off power an option?

Wara with Stanford University argued PG&E needs to implement a system where it cuts off power when fire risk is elevated. U.S. District Court for the Northern District of California Judge William Alsup last week said he wanted the utility to make the move given the deaths in recent fires (Greenwire, Jan. 10).

San Diego Gas & Electric Co., a subsidiary of Sempra Energy, has that in place. It would be more disruptive in PG&E territory, however, Wara said, as there are taller trees and more rural homes.

PG&E additionally will need more conservative triggers for when to turn off power, Wara said. The utility in fact looked at doing it just before the Camp Fire started but opted against it because weather conditions didn’t meet the SDG&E criteria, which PG&E uses as a template.

However, turning off the power when it’s windy is the best option at this time for shrinking wildfire damages, Wara said.

"That’s the only way out of this I think at this point," Wara said.