PG&E power line failed near start of another Calif. fire 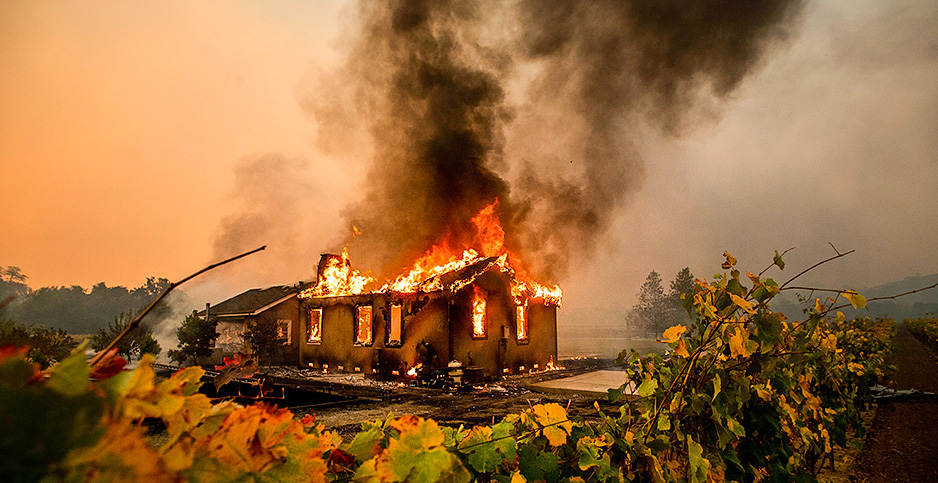 A Pacific Gas and Electric Co. transmission line went down around the same time and location as the start of an ongoing California fire, the utility said in a report signaling it’s under investigation for possibly sparking the blaze.

The San Francisco-based utility told state regulators that a 230-kilovolt transmission line deenergized in Geyserville, a Sonoma County town, around 9:20 p.m. local time Wednesday. That’s roughly the same time that the Kincade Fire ignited. The fire has since grown to destroy at least 49 structures and prompt thousands of people to evacuate.

The California Department of Forestry and Fire Protection, or Cal Fire yesterday had "taped off the area around the base of transmission tower … in the area of the Kincade Fire," according to PG&E’s report to the California Public Utilities Commission.

A Cal Fire worker at the tower yesterday morning alerted a PG&E worker to a broken jumper, the report said. A jumper is a piece of wire that jumps the power line over the insulator, said PG&E CEO and President Bill Johnson.

PG&E yesterday switched off power to distribution lines in the area, part of a precautionary outage that blacked out 179,000 homes and businesses. The shutoff followed forecasts of hot, dry weather and wind gusts of more than 45 mph, the level considered high-risk for trees or branches to fall into distribution power lines that go to customers.

PG&E did not, however, shut off larger transmission lines. Wind forecasts were not for gusts of 55 mph, the level considered high enough to warrant shutting off transmission power, Johnson said.

He declined to say whether PG&E will change how it decides to shut off power on transmission lines, if the utility is found responsible for the fire. "We’d like to get the answer to the question first of what happened," Johnson said.

Johnson said that filing the report with the CPUC "does not tell us where the fire started," and that a Cal Fire investigation would answer that question.

The new investigation comes as the utility, which serves 5.4 million ratepayers, faces customer outrage for repeated intentional power shutoffs. PG&E is in bankruptcy reorganization as it deals with some $30 billion in liabilities tied to deadly 2017 and 2018 fires. The goal of shutting off electricity is to avoid any risk of a spark, Johnson has said.

The Kincade Fire as of last night had burned 16,000 acres in Northern California wine country, which was hit by deadly fires in 2017.

"If PG&E caused this fire, man, the bankruptcy gets more complicated," said Michael Wara, a Stanford University professor and a member of the California Commission on Catastrophic Wildfire Cost and Recovery.

Wara noted that a transmission line trips off automatically if it’s knocked down by a tree branch or other vegetation, or if some component of the line fails.

California law makes utilities financially responsible for any fire started by their power lines or other devices, whether or not the company was negligent. The policy is known as inverse condemnation.

The state’s Democratic governor, Gavin Newsom, has pledged to hold PG&E accountable for "greed and mismanagement" that he says led up to the current problems.

But he has also signaled he would take responsibility for future outages. "I own this," he said at a news conference yesterday, adding, "It’s on me to make sure this doesn’t happen again."

Last night, PG&E said it has restored power to most of the customers blacked out in the most recent precautionary shutoff.

However, the utility also warned it’s likely to shut off power again tomorrow to a large number of customers, perhaps lasting many days.

"It has the potential to be on the same level as the one that started on Oct. 9, but of a longer duration," Johnson said.

In that earlier shutoff, PG&E cut electricity to nearly 800,000 households and businesses, affecting more than a million people. Power stayed off for three days for some of those residents.

For this weekend, there’s a forecast for very strong offshore winds, potentially rising to the level of a one-in-15-year event, said Scott Strenfel, principal meteorologist for PG&E.

The winds could affect people in eight of nine zones in the utility’s 77,000-mile territory, Johnson said. That doesn’t mean the entirety of each zone will be out of power, he said, adding that the utility will keep checking the weather and narrowing down who will be blacked out.

Some people who just got their electricity restored could be among those to lose power again, Johnson said.

In the wake of the Oct. 9 shutoff, Johnson said PG&E would aim to get power restored within 48 hours of high winds ending for any future forced shutoffs. Asked yesterday if PG&E is likely to exceed that with the upcoming outage, he said, "I hope not."

But, he added, with high winds, the utility is "likely to have more physical damage to the assets. That might take longer" to inspect the system before restarting power. "We won’t know until we get there."