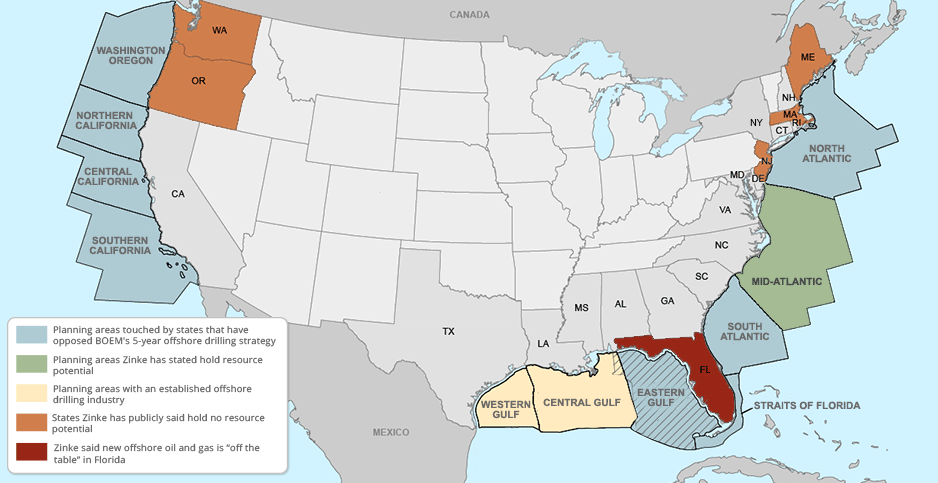 Following widespread backlash against his plan to open most of the outer continental shelf to drilling, Interior Secretary Ryan Zinke began hinting which parts of the ocean could remain closed for business. Claudine Hellmuth/E&E News; Data: Bureau of Ocean Energy Management

"Rather than looking at 94 percent taken off, I said, ‘Let’s do a zero-based budget, and let’s put everything on, and let’s have a discussion in America about priorities and about oil and gas,’" Zinke told a panel of House appropriators last week. He was comparing his department’s proposal to the Obama administration’s 2017-2022 leasing program, which included only Alaska’s Cook Inlet and the Gulf of Mexico.

"The U.S. has blindly ignored potential offshore energy resources for many decades," said Christopher Guith, senior vice president for policy at the U.S. Chamber of Commerce’s Global Energy Institute. "The Chamber is hopeful the current offshore leasing process will reverse that trend and enable the owners of these resources, the American people, to see what energy assets we have available offshore."

Critics of the Trump administration’s offshore proposal have tried to pin down the details on which parts of the ocean Interior and BOEM officials will place off-limits to drilling.

Capitol Hill Democrats have summoned Zinke to explain his seemingly contradictory statements on Florida’s exemption from the five-year plan. It’s unclear whether GOP committee leadership will schedule a hearing.

Zinke has tried to soften his statement by saying Florida does not have an exemption but maintains that new oil and gas platforms will not be permitted in the state’s waters.

While Zinke has declined to commit to block offshore drilling in other states, the Interior secretary has attempted to assure members of Congress — both Republican and Democrat — that their dissent will be reflected in his agency’s final offshore program.

Zinke’s statements align with BOEM resource estimates, which show that most offshore energy potential in the Lower 48 lies in the Gulf of Mexico, Southern California and the Mid-Atlantic (see inset map).

Former President Obama noticed the region’s energy potential, too. The first draft of the 2017-2022 program, released in 2015, included all of the Mid-Atlantic planning area and a section of the South Atlantic.

Obama’s Interior dropped those regions from its second draft of the plan.

That’s likely because it costs millions of dollars to construct a new offshore rig. Instead, oil seekers are focusing their attention on onshore assets, which are much less expensive to tap.