Piling up in N.H., some Republicans talk climate 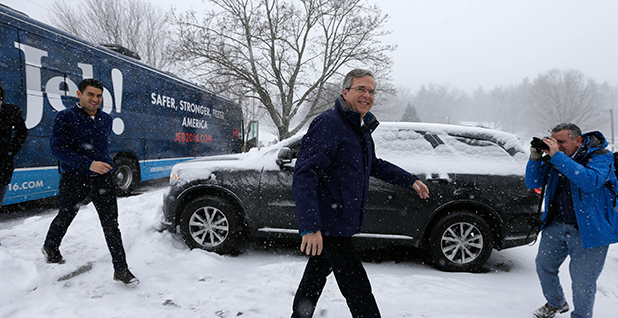 Jeb Bush, campaigning in New Hampshire ahead of tonight's primary, was greeted with applause when he told a town hall that "the climate is changing" and "man has to have some influence, given our role on the planet." Photo by Steven Senne, courtesy of AP Images.

SALEM, N.H. — Martha Marks’ face was splotched with a nervous red when Sen. John McCain walked off the plane. She was new to this. She had recently organized a group of conservatives to work on environmental issues. Now she was about to give her first endorsement. But she wanted to meet the man first.

That took some doing. It was 2000, and McCain was running for president. In a matter of days, the Arizona Republican would stage an unlikely victory in New Hampshire, taking the primary from the expectant hands of George W. Bush.

So they rendezvoused at the Phoenix airport. And it turned out McCain was planning to ask for more than her endorsement.

They were led to a plainly painted room inside the facility. She had flown from Chicago for the hourlong meeting. McCain was just getting back into town. From where, she doesn’t remember. But New Hampshire was on his mind.

"He said, ‘I’m having the hardest problem answering the question about climate change. Everywhere I go, they’re asking me about climate change,’" Marks remembers. "He said something like, ‘I believe it’s real, I’m willing to get engaged, but I don’t know what to tell them.’

"We all looked at each other," she said.

It was surprising, but maybe it shouldn’t have been. When New Hampshire voters go to the polls today, nearly half of all Republicans will be moderate or liberal, according to exit polling from 2012 and 2008. Just as many describe themselves as politically independent, at 47 percent.

"It might be a last-minute decision," said David Standen, an undeclared voter who wasn’t sure if he’d cast his ballot for a Democrat or a Republican.

On man-made climate change, he said, "I think there’s something going on."

Throughout the snow-crusted state, today’s election has become a part of the winter landscape. Lines of cars clog quiet tree lined roads as people cram into local schools for town halls with candidates. Buses full of campaign volunteers disgorge their bleary-eyed cargo in targeted neighborhoods. And journalists prowl the local crowds for bits of private thoughts. It’s not unusual to hear Republicans here talk openly about climbing temperatures as an issue that might soften the lines between seasons and pose risks to the state’s sprawling stands of forest.

"I think climate change is a very legitimate issue in this state," said former U.S. Rep. Charlie Bass, a Republican who appeared with Ohio Gov. John Kasich at a campaign event on Sunday. To help his party win in New England and elsewhere, he said Republicans "need to get back to that."

There are signs it never really left. New Hampshire is one of nine states participating in a regional cap-and-trade program to limit carbon emissions called the Regional Greenhouse Gas Initiative. Its membership isn’t currently determined by Democrats. Both chambers of the state Legislature are controlled by Republicans.

Also, Sen. Kelly Ayotte (R-N.H.) supports President Obama’s Clean Power Plan. Political observers say that’s an acknowledgment of the state’s moderate attitude as Ayotte defends her Senate seat from a challenge by Democratic Gov. Maggie Hassan. A win by Ayotte could mean the GOP retains its control over the Senate.

Her climate positions could especially help her among independents, women and millennials — voters being aggressively sought by Democrats, says Jay Faison, the Republican businessman who founded ClearPath Foundation to push his party to support clean energy and climate initiatives.

The group has about $160 million. Faison co-sponsored an event in Manchester on Friday to urge presidential candidates, members of Congress and big donors to adopt clean energy positions on sources like nuclear and hydropower. Earlier in the week, he was in Washington, D.C., quietly pitching the idea for legislation that would replace the Clean Power Plan with an economywide carbon price based on free markets. He says ClearPath hasn’t endorsed a specific policy like a carbon tax.

For now, Faison is taking a "wait and see approach" before choosing which GOP presidential candidate to support financially. His party, he says, could bridge its gap with young voters and others by adopting strong policies around clean energy and climate change. Former Massachusetts Gov. Mitt Romney might have won the White House in 2012 if he had gotten more votes in just a couple of cities, like Miami and Cleveland, amenable to those visions, Faison said.

"So yes, if you want to win the White House, I think this is a very important issue," he said.

Lessons from a dark horse

Take Priscilla Greene, 65, who was still deciding on Sunday which Republican she would vote for. She was attending a Kasich town hall, but she also likes New Jersey Gov. Chris Christie and Jeb Bush, former governor of Florida. Climate change is "a huge problem," she said, but it might not be as important to her as ending legal abortion.

Asked whether she could support someone who says climate change isn’t real, Greene said, "Yeah, I think I could, but not with a clear conscience."

Bush and others are making the case to undecided voters, about 20 percent of whom historically don’t make up their mind until the day before voting, according to exit polls.

"Let me start by saying the climate is changing, man has to have some influence, given our role on the planet," Bush said in a town hall Sunday. "It’s just impossible for me to suggest that we don’t have an influence."

That statement drew widespread applause. He talked about the issue for more than five minutes in response to a question. To address warming, he said there needs to be a "bottom up" approach to adaptation. He also called on Congress to increase funding for research and development into clean energy.

The most recent polls show Donald Trump with a large lead followed by a potential pileup in second place. A survey released yesterday by the University of Massachusetts had Trump with 34 percent; Florida Sen. Marco Rubio and Texas Sen. Ted Cruz each with 13 percent; Bush and Kasich tied at 10 percent; and Carly Fiorina and Ben Carson both under 5 percent.

Surprises do happen in this woodsy state. McCain knows from experience.

In 2000, he was considered a dark horse. He ended up beating George W. Bush by 21 points, stinging a family who spent time in nearby Maine. Granite Staters gave McCain the nod again in 2008.

That meeting 16 years ago between the Arizona senator and Marks, who co-founded ConservAmerica, formally known as Republicans for Environmental Protection, marked one of the first times a Republican openly promoted climate policies, Marks said last week.

Within the day, a policy staffer with her group by the name of Jim DiPeso had kicked his son off the family computer to begin writing a climate position paper for McCain. Soon he began talking about the effects of warming on the campaign trail.