Pillar of DOJ environment division to exit after 30 years 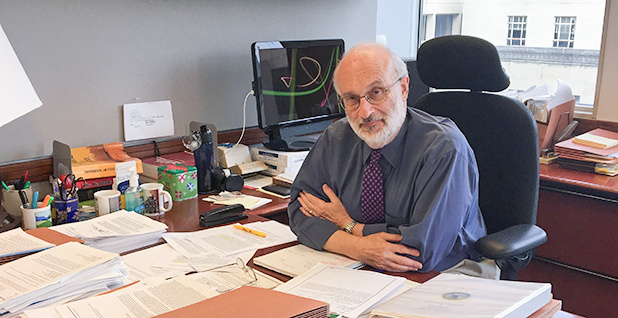 After nearly 30 years as a government environmental lawyer, Walter Benjamin Fisherow is leaving the Justice Department this month.

It’s not because he’s sick of his job or doesn’t like his co-workers, said Fisherow, who goes by Ben.

"I don’t want to be one of those guys who is lying in the hospital bed saying, ‘Geez, I wish I could have spent just one more day in the office,’" he said in an interview this week.

Fisherow, who will turn 70 in November, runs the environmental enforcement section in DOJ’s Environment and Natural Resources Division, a post he’s held since 2012. He leads 150 lawyers and has a corner office with a nice view in downtown Washington.

He started at DOJ in 1987 as a trial attorney and never left, serving as deputy section chief, assistant section chief and senior attorney.

Fisherow has won acclaim for his work cracking down on air pollution from power plants, including a major 2007 settlement with American Electric Power Co. Inc. Other notable cases he’s played a role in are a 2014 settlement with automakers Hyundai and Kia over greenhouse gas emissions and the ongoing litigation over the Volkswagen diesel emissions scandal.

He’s won numerous awards and accolades from his colleagues, but he’s humble about his role as a manager.

Fisherow sees himself and his staff in a scene from Steven Spielberg’s 1998 movie "Saving Private Ryan."

In that scene, Tom Hanks’ character — an Army Rangers captain — approaches a makeshift camp three days after D-Day to get a new assignment. Weary and bedraggled after fighting on the beach in Normandy, the captain watches longingly as soldiers shave with hot water, pour steaming black coffee, and eat sandwiches made with thick-cut bread and huge slabs of meat.

In Fisherow’s shop, he said, the assistant section chiefs are the field officers and "I am eating pastrami sandwiches."

"They do everything," he said. "The staff is great. We’re friends. We’ve been together forever."

John Cruden, the head of the Environment and Natural Resources Division, who held Fisherow’s job back in the 1990s, calls him "a pivotal player and an authoritative voice in the civil enforcement of our nation’s bedrock environmental laws — laws that safeguard clean air, water and land for the American people."

"Through the years, many of which we spent together in the environmental enforcement section, I have highly valued Ben’s advice, expertise, wise judgment and his friendship," Cruden said. "He has been a great leader of our enforcement effort, and the public has been well served by his commitment and exceptional contributions to protecting our environment."

Fisherow has spent his career as a government attorney.

After graduating in 1974 from the University of California’s Hastings College of the Law in San Francisco, he moved to Washington for a job at the Federal Trade Commission.

He didn’t envision a career enforcing clean air and water laws. "I didn’t take environmental law in law school. Then it was an elective, one class," he said. "I wanted to be a food and drug lawyer badly."

He recalled sitting in his FTC office "off in a corner someplace" and "it was late at night on a weekend, and there was not a soul around." Gazing at his reflection in the window, he said to himself, "I don’t think I could ever be as happy as I am right now, working my butt off here when no one else is around. Time to think, interesting issues. It was great."

In retrospect, he said, laughing, "It wasn’t great. It was a goofy job." But then, it was "truth and justice and what’s right and what’s wrong, and that was a great thing for a young kid to do."

In the 1980s, he spent a stint working on Capitol Hill under then-Energy and Commerce Chairman John Dingell (D-Mich.). Fisherow was counsel to the Oversight and Investigations Subcommittee.

"Working for Dingell was a real trip," he said. He was primarily focused on food and drug regulations, but he dabbled in environmental issues in what he called "the Gorsuch era," when the Reagan-era U.S. EPA boss Anne Gorsuch Burford was cited for contempt of Congress after refusing to hand over toxic waste records and ultimately resigned after less than two years on the job.

Fisherow was dispatched by Dingell’s committee to monitor the district court proceedings over Rita Lavelle, the former head of EPA’s toxic waste program.

Keeping tabs on the trial was "fun," he added.

Lavelle was later found guilty of perjury and blocking federal investigations and sentenced to prison as part of an EPA toxic waste scandal, the Los Angeles Times reported.

He moved to DOJ in 1987, when the department was hiring lawyers to do Superfund work.

The environment division and the enforcement section in particular "grew from a little backwater that was doing pretty simple, regular stuff into this monster place where we were taking on these huge companies for Superfund responsibilities," he said.

He recalled being a rookie in the office when he attended a meeting out in Kansas City, Mo., at the Conservation Chemical Superfund tract that was "a big site back then."

There was a room full of people including "monster corporations, monster lawyers … and one DOJ lawyer sitting at the very end of the table." They were all waiting for the DOJ lawyer "to speak and to tell them the gospel," Fisherow said. "I said, ‘Whoa, this is power. We’re in a good position here.’"

He’s been with the agency ever since and doesn’t regret abandoning his goal to be a food and drug lawyer.

"This is much more fulfilling," he said, pointing to camaraderie and a shared mission in the office.

He called his work "pure." When he tells people on the street what he does, "They say, ‘Wow! You get to do that?’"

Fisherow is nervous about retiring. He said he’s afraid the job has become "like a crutch. One of the legs of your stool is going to get ripped out."

But he’s got some big plans for how he’ll fill his time.

Just days after his last day at DOJ, he and his wife — a former magistrate judge at the Superior Court of the District of Columbia — have tickets to fly to England and Scotland for a three-week trip.

And they’ve got a cruise planned for December that will take them from Singapore to Australia.

He’s also hoping to get into woodworking. He got a D in wood shop in junior high after making a less-than-perfect wooden trivet for his mom. He’d like to make up for it by making a table or a chair, and he’s hoping to spend two weeks in Maine at a furniture design workshop.

"I can improve my resume," he said.

Some of his other plans involve mentoring students, picking his granddaughter up from school and getting back into yoga.

"I’m going to get back to yoga. I did yoga for two or three years and thought it was the nuts, just great," he said. "Then I gave it up." Now that he’s got more time, he plans to join the gym again.