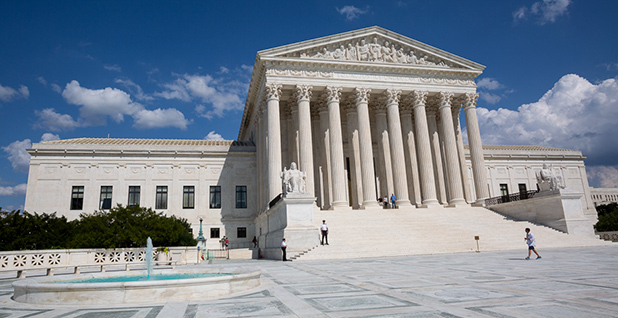 The Supreme Court is set to consider today whether it will take up a new energy case this term challenging a lower court ruling on seizing state-controlled land to build the PennEast pipeline.

Leaving the 2019 decision on the books has the potential to change how eminent domain is handled in energy projects around the country and could have a major impact on natural gas infrastructure, pipeline supporters say.

The 116-mile natural gas project from Pennsylvania to New Jersey ground to a halt when the 3rd U.S. Circuit Court of Appeals found that PennEast Pipeline Co. LLC could not bring the Garden State to federal court to condemn 42 parcels of state land against its will.

The initial case was one of the first times a state had argued that its constitutionally protected sovereign immunity was threatened by a private company taking condemnation action against it.

As the justices are considering the case two days after the Biden administration came into office, the federal government’s position in the challenge is unclear.

According to the pipeline company and the Trump administration, allowing the 3rd Circuit ruling to remain in place would upend decades of practice under the Natural Gas Act of allowing private companies with projects approved by the Federal Energy Regulatory Commission to take land to build pipelines.

"I think what we’ve seen is this is an issue that has become essentially a political weapon, basically advancing the agenda of a particular state," said Anthony Cox, chairman of the PennEast Pipeline Co. board of managers, in an interview.

Wall also made the argument that the 3rd Circuit did not have proper jurisdiction over the case.

"I think the Supreme Court will take the case," said Steptoe & Johnson LLP partner Monique Watson in an email this week.

"Property rights is an important issue for both Republicans and Democrats and ensuring that the scope of eminent domain under the Natural Gas Act is clear will benefit ongoing infrastructure development," she said.

Though the support of the solicitor general tends to push the court in favor of granting a petition, the shift to a new administration may mean DOJ could decide to no longer back PennEast’s appeal.

"The new administration could pull their support, but they’ve got so much on their what-do-we-do-with-cases-in-litigation plate it may be hard to get their attention on this," said David Bookbinder, general counsel at the Niskanen Center, in an email.

Acting Solicitor General Elizabeth Prelogar also may be able to take some sort of action before the next Supreme Court conference date on Feb. 19, he added.

The court may decide, if it takes the petition, to treat the federal government’s argument as incidental to the case, said Christi Tezak, a managing director of ClearView Energy Partners LLC.

A spokesperson for PennEast said she had no indication from DOJ that the acting solicitor general planned on changing the government’s position.

"We are confident the brief the acting Solicitor General filed regarding PennEast’s petition before the U.S. Supreme Court is well-reasoned and establishes the merits as to why the Court should review the Third Circuit’s deeply flawed decision," said PennEast spokesperson Patricia Kornick in an email.

‘Has the sky fallen?’

PennEast officials defended FERC’s authority to grant PennEast the right to take state-held land and warned that the consequences of the 3rd Circuit ruling may open the door to a new type of legal challenge from states strongly opposed to fossil fuel development.

"I fully expect that, left unchecked, that other states with similar political agendas will use this weapon as New Jersey has in this case," said Cox.

Simply rerouting the pipeline to avoid the 42 parcels of land at question in the case wouldn’t be a workable solution because most of the parcels involved conservation easements on private property. Only two of the properties are actually owned by the state of New Jersey, he said.

"It’s very, very easy to put up a conservation easement on a private property that would essentially create a blocking effect," he said. "No matter where you turn, you would run into another wall, and that’s a problem."

Watson agreed that a decision in favor of New Jersey could potentially give states veto power over further interstate natural gas infrastructure.

Also, it could affect the industry’s ability to provide reliable access to natural gas to meet the country’s energy demands.

"This is not an insignificant concern," she wrote.

Defenders of New Jersey’s position rejected the claim that states were latching onto the decision to block pipeline projects. There is only one other stalled case in the 4th U.S. Circuit Court of Appeals that raises a similar issue of sovereign immunity.

"I think the easiest answer to PennEast’s wild theory is: Where have you seen this happening? In the almost two years, has the sky fallen?" said Jennifer Danis, a staff attorney at Columbia Law School’s Environmental Clinic.

Danis is representing the New Jersey Conservation Foundation, which is a party in this case, because it was a party to the appeal in the 3rd Circuit.

"They are desperately clinging to the last threads of the fossil fuel era at a time when the majority of states have robust clean energy goals," Danis said.

"There are dockets all over the country, Colorado, California, New York, Massachusetts, where the state public utilities commission have opened proceedings to determine how their utilities are going to transition away from gas."

In his long-anticipated friend of the court brief arguing that the 3rd Circuit lacked jurisdiction in the case, Wall argued that New Jersey should have raised its concerns in the FERC proceeding when the pipeline route was challenged.

Instead, the state should have brought the case up either in the U.S. Court of Appeals for the District of Columbia Circuit, or in the circuit court where the pipeline company is based, he wrote.

Steptoe’s Watson said Wall was correct that the Natural Gas Act required appellants to raise objections to an order with FERC before they can be raised on appeal.

"Consequently, the Court could decide that it needs to emphasize that the plain language of a statute means what it says — in this case, no objection can be raised before the court unless it has been raised before the Commission," she said in an email.

Some legal experts noted that the argument about the 3rd Circuit jurisdiction hadn’t been brought up in the district or circuit court challenges.

"I think that argument is extraordinarily wrong in a way that might actually open the door for the court to say some useful things about the continued power of district courts in hearing these eminent domain cases," said Robert McNamara, a senior attorney at the Institute for Justice, who was not involved in the case.

The solicitor general’s argument suggested that "any conceivable argument" on an eminent domain action for a project would have to be made through a direct appeal to the D.C. Circuit.

"Usually you would make this argument in front of a federal court that’s being asked to take your land away, which is a very intuitively appealing argument, and it’s the argument that all kinds of landowners want to make, not just the state of New Jersey," McNamara said.

Since federal courts must first address issues of jurisdiction before considering the merits of the case, the solicitor general’s question complicates the issue before the court in a way that could make the justices less inclined to take up the case, he added.

But Erin Murphy, a partner at the law firm Kirkland & Ellis LLP who is representing PennEast, said that if the Supreme Court accepts the case, it could consider the substance of the arguments, as well as the question about jurisdiction, even if those angles hadn’t been raised before.

What’s next for PennEast?

Company officials are already considering other options for how to move forward with the pipeline ahead of a decision from the Supreme Court on its challenge to the 3rd Circuit ruling.

The company petitioned FERC for a certificate amendment to allow it to split the project into two separate phases, with phase one only including a section of the pipeline in Pennsylvania.

FERC tabled consideration of the proposal earlier this week after opponents of the plan warned that FERC did not have jurisdiction to make a decision while the commission’s order for the pipeline is on appeal at the D.C. Circuit.

If the proposed phases are approved, the company expects to complete that work in 2022. PennEast estimates phase two of the project would be completed two years after that.

In a note to clients, ClearView wrote last December that a certificate amendment could create more uncertainty about how FERC and the courts approach eminent domain questions, particularly after FERC has changed its policy on how quickly to address landowners’ objections to having their land taken.

"Additional policy shifts could lie ahead under a Democratic Chairman" at FERC, the note read.

PennEast is also facing a separate challenge to its FERC approval, which has been on hold while the Supreme Court petition has been pending. Cox said he was confident in the merits of that certificate.

"Obviously, there’s a lot of work to be done," said Cox. "By no means are we ready to break down the day we get an order from the Supreme Court; there is still a lot of work ahead of us."