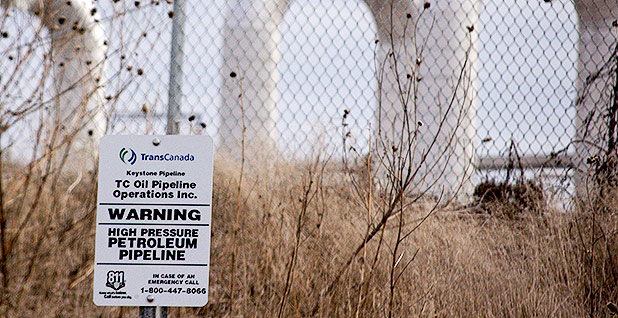 Environmentalists are challenging Keystone XL, which would connect to the existing Keystone pipeline to deliver Canadian oil to U.S. refineries. Photo by ShannonPatrick17, courtesy of Flickr.

Environmental groups are taking the Trump administration to court over the recent approval of the Keystone XL pipeline.

In a lawsuit filed in federal court today, a coalition of groups slammed the State Department for relying on a "stale" environmental review to support its recent approval of a cross-border permit for the contentious oil pipeline.

President Trump approved the TransCanada Corp. proposal Friday, paving the way for completion after years of uncertainty for the project, which would help deliver Canadian oil to U.S. refineries. President Obama had rejected the pipeline in 2015, citing concerns about international climate leadership.

The State Department’s decision last week relied on a 2014 environmental impact statement prepared during Obama’s tenure. Environmental groups say the administration violated the National Environmental Policy Act by using an outdated and incomplete study that fails to consider new information that has arisen since then.

"When you go through a NEPA process that’s over 3 years old, you come to a decision that it’s not in the national interest, and then come back three years later with the same environmental analysis and say that it is somehow in the national interest just doesn’t make sense," Center for Biological Diversity Endangered Species Director Noah Greenwald told E&E News.

CBD is one of several groups suing over the pipeline approval. The Natural Resources Defense Council, the Sierra Club, the Bold Alliance, the Northern Plains Resource Council and Friends of the Earth are also suing. The Indigenous Environmental Network and North Coast Rivers Alliance filed a separate lawsuit earlier this week (Energywire, March 29).

Today’s lawsuit, filed in U.S. District Court for the District of Montana, also says the Keystone XL environmental impact statement was flawed to begin with because it "grossly underestimated the pipeline’s impacts on the rate of tar sands development."

"The Trump administration broke the law by arbitrarily endorsing a permit to build the Keystone XL tar sands pipeline," NRDC Canada Project Director Anthony Swift said in a statement. "It ignored public calls to update and correct a required environmental impact statement that should have led to one conclusion: Piping some of the dirtiest oil on the planet through America’s heartland would put at grave risk our land, water and climate. We’re asking the court to put an end to Keystone XL, once and for all."

Legal experts note, however, that the environmental groups will not have an easy path to victory in the courtroom.

"The EIS is clearly outdated and deficient in a number of respects," Vermont Law School professor Pat Parenteau said. "But the plaintiffs will have to overcome court decisions that have barred challenges to decisions made under the various presidential executive orders authorizing KXL and other cross-border pipelines."

Dorsey & Whitney attorney Jim Rubin, formerly of the Justice Department, noted that the cross-border permit at issue for Keystone XL may make it tougher for litigants to win NEPA arguments.

"A NEPA challenge to a presidential permit may be more difficult to mount than typical challenges to agency decisions," he said in an email. "Though the State Department utilization of a NEPA process may provide a jurisdictional hook for review, courts may be reluctant to review a decision which is ultimately made under presidential discretion."

Opponents of the pipeline are also focused on Nebraska, where officials are still considering whether to issue a state permit for the project.