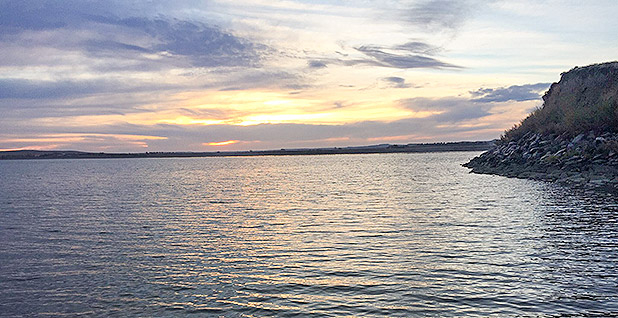 The waters of Lake Oahe are at the center of the Cheyenne River Sioux Tribe's religious freedom argument against the Dakota Access pipeline. Photo by Ellen M. Gilmer.

Opponents of the Dakota Access pipeline are taking a new approach in the courtroom: religious freedom claims.

Following news last night that the Trump administration had granted the final easement needed for Energy Transfer Partners to construct the oil pipeline beneath Lake Oahe, a dammed section of the Missouri River, the Cheyenne River Sioux Tribe submitted a flurry of overnight legal filings seeking to block the project.

According to tribal lawyers, placement of a pipeline beneath the Missouri River would desecrate sacred waters used for religious ceremonies. The Cheyenne River people occupy a sprawling 4,200-square-mile reservation along the river in South Dakota, just south of the Standing Rock Indian Reservation. The two tribes have been battling the pipeline in the U.S. District Court for the District of Columbia since last summer.

"The Tribe does not argue that Dakota Access may not have its oil pipeline elsewhere, or that infrastructure projects in Lakota territory must be barred forever; only that this pipeline, sited through these sacred waters, owned in trust by the United States for this Tribe, violate the Cheyenne River Sioux Tribe’s and its members’ right to exercise their religion," Fredericks Peebles & Morgan LLP attorneys representing the tribe told the court.

Without a construction freeze, tribal members near the construction site in North Dakota face imminent harm from confrontations with law enforcement and private security, the lawyers said.

They noted that they would have raised the religious freedom claims sooner, but they were under the impression they would be able to discuss the issue during an in-depth environmental review process promised by the Obama administration.

The Trump administration scuttled that review this week, opting to instead rely on a less detailed environmental assessment completed last year, which found no significant impact from the pipeline (E&E News PM, Feb. 7).

The Standing Rock Sioux Tribe, which has taken the lead on many previous legal actions in the case, has not yet filed a challenge to the easement approval.

The Cheyenne River Sioux’s new claims center on the Religious Freedom Restoration Act, a 1993 law that says the federal government cannot "substantially burden a person’s exercise of religion" unless it has a compelling interest and uses the "least restrictive means."

While previous claims focused on the tribal consultation process and potential environmental harms, the latest briefs say the presence of the pipeline — with or without a rupture — would sully their sacred waters.

"The Lakota people believe that the mere existence of a crude oil pipeline under the waters of Lake Oahe will desecrate those waters and render them unsuitable for use in their religious sacraments," the brief said, noting a Lakota prophesy that a "black snake" will destroy the people’s homeland. Lakota people make up the Cheyenne River tribe.

But RFRA’s "substantial burden" test is a tough one.

In a 2009 decision, for example, the 9th U.S. Circuit Court of Appeals ruled against a group of American Indian tribes making similar claims. The Navajo Nation, Havasupai Tribe and others argued that a Forest Service plan to use artificial snow for skiing on a northern Arizona mountain violated their religious freedom rights because the artificial snow would contain trace amounts of human waste, desecrating an area tribal members use for worship. The court found that the government’s action did not represent a substantial burden.

"That is, the presence of the artificial snow on the Peaks is offensive to the Plaintiffs’ feelings about their religion and will decrease the spiritual fulfillment Plaintiffs get from practicing their religion on the mountain," the opinion said. "Nevertheless, a government action that decreases the spirituality, the fervor, or the satisfaction with which a believer practices his religion is not what Congress has labeled a ‘substantial burden’ … on the free exercise of religion."

The Cheyenne River Sioux’s claim could be viewed similarly, as the tribe has expressed opposition to the "mere existence" of the pipeline beneath the river.

Pipeline proponents have also repeatedly pointed to an existing natural gas pipeline that runs beneath the river as evidence that current opposition to construction is unfounded. Cheyenne River lawyers addressed the issue briefly in the restraining order request, arguing that Dakota Access’ transport of oil would specifically fulfill the tribe’s "black snake" prophesy.

Some court watchers have already given the tribe’s new legal strategy long odds. Bloomberg Intelligence analyst Brandon Barnes said the tribe has an uphill battle because RFRA was intended for narrower application.

"They have a tough road ahead of them," said Barnes, who is a lawyer. "Using [RFRA] in this way to stop a pipeline from being built is probably not the way it was intended to be used."

Barnes noted that Judge James Boasberg may be reluctant to consider new claims after the tribe had the length of the litigation and the earlier environmental assessment process to voice their concerns. But, he added, constitutional claims do tend to catch extra attention from judges.

"He is a very reasonable judge, so I think he will consider everything that comes in front of him with the due deference it deserves," he said. "Legally, the RFRA argument seems weak compared to an environmental argument, but from an optics perspective, you don’t want to impinge on someone’s constitutional right."