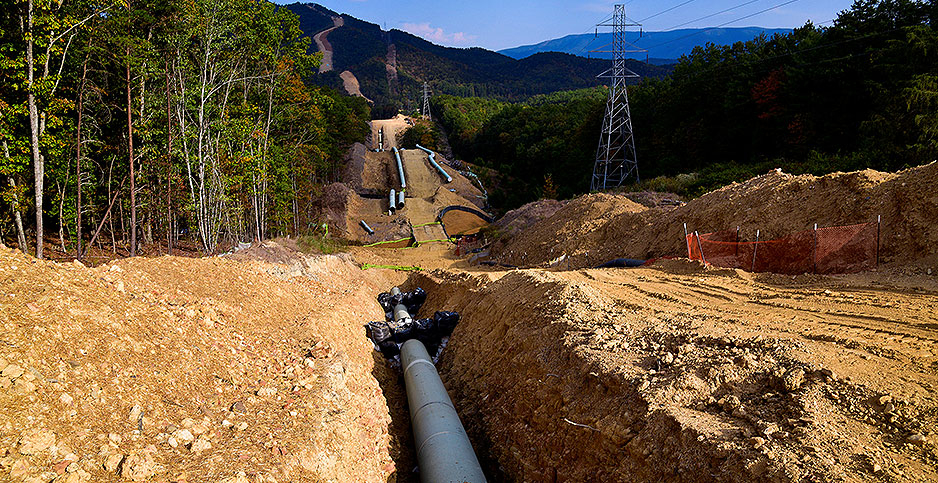 Lengths of pipe placed on the ground along the under-construction Mountain Valley pipeline near Elliston, Va., in September 2019. Charles Mostoller/REUTERS/Newscom

Developers of the Mountain Valley pipeline will buy more than $150 million in carbon offsets to make the conduit carbon-neutral during its first decade in service, according to an announcement yesterday that spurred allegations of green washing.

The project — which aims to carry natural gas roughly 300 miles from West Virginia to southern Virginia — will make the pipeline “one of the first interstate natural gas transmission pipelines to acquire carbon offsets for its operational emissions,” according to Mountain Valley Pipeline LLC, a joint venture of energy companies. The company said the plan is part of a long-term commitment to counter emissions from its operations and purchases of electricity.

The company is committed to “pursuing climate change mitigation and adaptation while also balancing the immediate and increasing need for energy in our country,” Charletta continued in the statement.

The offsets will come primarily from a methane abatement project at an active metallurgical coal mine in southwest Virginia through an agreement with a subsidiary of NextEra Energy Resources, as well as a “substantial effort” to address abandoned and orphaned gas wells in West Virginia, the announcement said.

The project at the Virginia mine is “expected to be the largest operating coal mine methane abatement project in the world when it reaches full production in 2023,” Mountain Valley said, and will work by capturing methane that would otherwise be vented into the atmosphere and converting it into carbon dioxide and water vapor.

While Mountain Valley’s plans add to a growing list of oil and natural gas companies that have made low-carbon pledges, its offset plans were panned by project opponents.

“Decision makers and the public should not be fooled: this offset scheme does nothing to change the fact that [the Mountain Valley pipeline] is a dirty fossil fuel project that would pollute our communities and exacerbate the climate crisis,” Patrick Grenter, an associate director with the Sierra Club’s Beyond Dirty Fuels Campaign, said in a statement.

“Not only would this plan do nothing to mitigate the pollution and public health effects of frontline communities due to fracking, it also wouldn’t address the massive climate impact of actually burning the fracked gas this pipeline would transport,” Grenter added.

In response to charges of green washing, Natalie Cox, a spokesperson for the Mountain Valley pipeline, said the offset plan is “the most recent demonstration of the project team’s sustained effort to ensure the [pipeline] is built in a safe and environmentally responsible manner,” while meeting public demand for energy.

Although Mountain Valley’s plans only cover emissions from its operations for the first 10 years, the joint venture said it will use that time to “continue to evaluate new technologies and other options related to carbon offsets in order to continue its plan for carbon neutrality.”