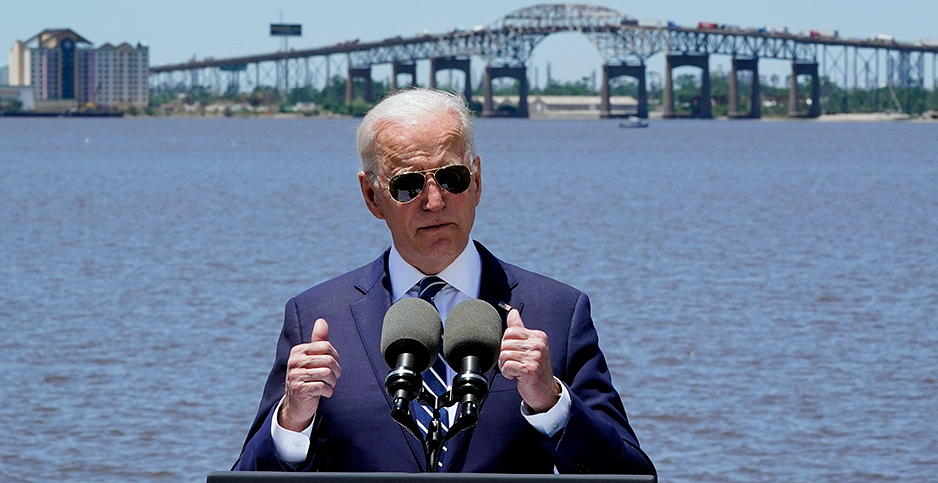 This story was updated at 9 p.m. EDT.

President Biden will host members of Congress from both parties this week, as talks on a bipartisan deal on infrastructure continue amid the fallout of a cyberattack that shuttered a major East Coast oil pipeline.

The president is expected to meet with Sen. Shelley Moore Capito (R-W.Va.) and other Republicans on Thursday, The Wall Street Journal reported over the weekend.

Capito, the ranking member on the Environment and Public Works Committee, who is also taking a lead role in negotiating with the Biden administration on infrastructure, spoke with the president prior to the congressional recess on the GOP’s $568 billion counterproposal.

This week’s meetings come on the heels of the cyberattack that shuttered the Colonial pipeline, which delivers about 45% of the fuel consumed on the East Coast.

The pipeline operator this weekend blamed a ransomware attack, which the Associated Press reported yesterday is suspected of having been caused by a criminal group of hackers known as DarkSide.

Sen. Ben Sasse (R-Neb.), a member of the Intelligence Committee, called Saturday for hardening pipelines and other critical infrastructure to such attacks in the package coming together on Capitol Hill.

"There’s obviously much still to learn about how this attack happened, but we can be sure of two things: This is a play that will be run again, and we’re not adequately prepared," Sasse said in a statement.

"If Congress is serious about an infrastructure package, at front and center should be the hardening of these critical sectors — rather than progressive wishlists masquerading as infrastructure."

Other Republicans echoed calls for boosting the security of critical infrastructure following the Colonial pipeline attack.

Congress "needs to redouble our efforts as a country to get past our internal divisions as the end-all-be-all of everything and focus on things like critical infrastructure in the future, because this is only going to continue to happen more often if we’re not careful," Rep. Adam Kinzinger (R-Ill.), a member of the Energy and Commerce Committee, said yesterday on CBS’s "Face the Nation."

Sen. Bill Cassidy (R-La.) predicted yesterday that both parties would work together to boost cybersecurity of pipelines and other infrastructure.

"The implications for this for our national security cannot be overstated," Cassidy said on NBC’s "Meet the Press." "And I promise you, this is something that Republicans and Democrats can work together on."

Cassidy, a member of the Energy and Natural Resources Committee, noted past steps that lawmakers have taken to boost cybersecurity but acknowledged there’s more work to be done.

"There has been problems in the past with sharing classified information with private entities, and Congress has passed a law to fix that," he said.

"This is why we need to take strengthening our energy infrastructure security seriously," Upton wrote on Saturday.

"Energy infrastructure is vulnerable from weather, adversaries, & cyber attacks. Let’s take action NOW to protect our infrastructure from these threats that put our nation & economy at risk."

This week, the LEAD on Climate coalition, which includes major businesses and the nonprofit sustainability advocacy group Ceres, will hold events to pressure lawmakers to support a strong infrastructure package that addresses the climate crisis and environmental justice inequities.

"Today, 80 percent of us live in metropolitan areas," wrote Denver Mayor Michael Hancock and Fort Worth, Texas, Mayor Betsy Price on behalf of the group.

The debate over Biden’s sweeping infrastructure proposal was roiled Friday by the release of disappointing jobs numbers.

The Labor Department said employers added 266,000 jobs in April, far lower than in the previous month, fueling concerns the economic recovery may be slowing.

Pelosi said numbers highlight the need to pass both of the president’s recent major initiatives — the American Jobs Plan and a proposal focused on families.

"We need to take bold action to Build Back Better from this crisis by investing in our nation, our workers and our families," Pelosi said in a statement, adding that Democrats hope to work with Republicans on infrastructure but again signaling that the majority will move alone under budget reconciliation if needed.

"[T]he evidence is clear that the economy demands urgent action, and Congress will not be deterred or delayed from delivering transformational investments for the people."

The climate advocacy group Sunrise Movement on Friday called on Biden to "drastically expand" his infrastructure plans to $10 trillion in spending over a decade, as well as the inclusion of a Civilian Climate Corps pushed by liberal Democrats in both chambers.

"Millions of people are out of work, and the unemployment rate is rising. The real risk isn’t doing too much — it’s doing too little," Sunrise press secretary Ellen Sciales said in a statement.

But Republicans used the poor jobs report to push back against Biden’s push to pay for his infrastructure proposals by raising the corporate tax rates and taxing wealthy Americans.

Biden, McCarthy said Friday, "is not fixing a crisis, but creating new ones."

"Now, he is proposing the largest tax increase in American history, including making our corporate tax rate the highest in the world. His plan means higher costs and lower wages for families, while continuing to pay people not to work. This will not help our economy recover," McCarthy said in a statement.

"I’m not looking to punish anybody," Biden said in Lake Charles on Thursday. "I’m looking to rebuild America as a world leader. I’m going to look to make sure we have the best and most significant infrastructure in the world."

Biden also tackled head-on the criticism that his tax hikes would serve as a drag on the economy. "There’s just one problem with their argument: the facts — experts have looked at it," he said.

"The last time taxes were around the rates I’m proposing was in the ’90s, and the economy boomed. America created 20 million new jobs in eight years when these were the tax rates, and the facts are the American economy has had record job creation and growth under the same kind of plan I’m proposing."

Biden reiterated his decision "to hear ideas from both sides."

"I’m meeting with my Republican friends in the Congress to see, No. 1, how much they’re willing to go for, what they think are their priorities, and what compromises. … Again, I’m ready to compromise," he said.

Democratic suspicion of the talks with Republicans was underscored last week, when McConnell made remarks in Kentucky that he is "100%" focused on "stopping this new administration."

But in his appearance on "Meet the Press" yesterday, Cassidy said McConnell "absolutely" supports efforts by him and other Republicans to strike a bipartisan deal on infrastructure.

"On infrastructure, he has made it clear: If we can find something that actually spends money on infrastructure, roads and bridges — imagine that, as opposed to what the Biden plan does, which is spends a trillion dollars on things which have no relationship to infrastructure — we can cut a deal," Cassidy said.

"My recent experience has been that on the first day of the 117th Congress, we seem to be in the election mode already — I think that’s unfortunate," Hoyer said during a Washington Post event last week. That complicates efforts to set a timeline, he added. "Sooner is better than later."

Hoyer also recounted Treasury Secretary Janet Yellen’s words to him: "It’s not so much how soon it’s done, it’s the fact that it’s done right," he said, while acknowledging that passing Biden’s plans along party lines via budget reconciliation remains on the table.

House and Senate committees this week will continue to delve into various aspects of infrastructure as the Biden package comes together.

The Senate Environment and Public Works Subcommittee on Transportation and Infrastructure will meet tomorrow morning to consider equity issues in transportation.

One likely topic is legislation from committee Democrats to help communities identify and remove or retrofit highway infrastructure that creates obstacles to mobility.

A Senate Commerce, Science and Transportation subcommittee meets tomorrow afternoon to consider challenges facing the freight industry and options for Congress to boost domestic competitiveness and supply chains. Witnesses include representatives from the rail, ports and trucking sectors.

Schedule: The Senate Appropriations hearing is Thursday, May 13, at 10 a.m. in 192 Dirksen and via webcast.

Schedule: The House Appropriations hearing is Thursday, May 13, at 1 p.m. via webcast.