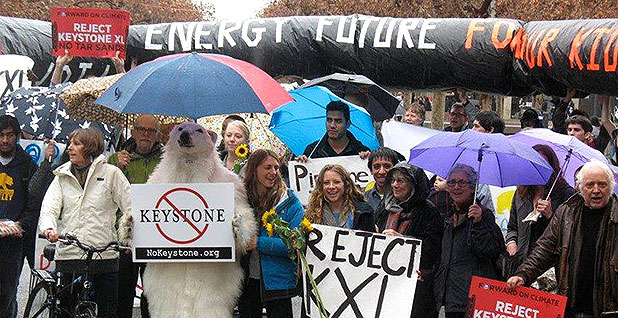 Environmental mascot Frostpaw the polar bear and others protest the Keystone XL pipeline. The battle now moves into the courtroom as groups challenge the Trump administration's approval of the project. Photo courtesy of the Center for Biological Diversity.

Environmentalists face hurdles in the courtroom as they challenge the Trump administration’s approval of the Keystone XL pipeline.

A coalition of green groups filed suit yesterday in the U.S. District Court for the District of Montana, arguing that the State Department relied on an outdated 2014 environmental review to greenlight the contentious oil project.

The lawsuit is one of two challenges filed so far to President Trump’s approval of the pipeline. Under the new administration, environmental groups are focused on courtroom battles and state-level permit decisions to oppose the project, which they view as a symbol of dangerous reliance on fossil fuels in the face of climate change.

Legal experts caution, however, that the groups have a tough battle ahead in court, as judges have generally taken a hands-off approach to the type of presidential permit issued for the pipeline’s U.S.-Canada border crossing.

"A NEPA challenge to a Presidential Permit may be more difficult to mount than typical challenges to agency decisions," Dorsey & Whitney attorney James Rubin said in an email. "Though the State Department utilization of a NEPA process may provide a jurisdictional hook for review, courts may be reluctant to review a decision which is ultimately made under Presidential discretion."

Is the permit reviewable?

Vermont Law School professor Patrick Parenteau noted a line of past court decisions that do not work in environmentalists’ favor. In litigation over the Alberta Clipper pipeline, for example, a federal judge in Minnesota ruled in 2015 that State Department cross-border approvals fell under presidential powers set aside in an executive order and were therefore not subject to judicial review under the Administrative Procedure Act and NEPA.

In 2009, district courts in South Dakota and Washington, D.C., similarly ruled that the president has "inherent constitutional authority to conduct foreign policy on behalf of the nation" and that a cross-border permit issued under that authority is not reviewable in court.

At least one outlier exists: In 2010, a different Minnesota federal judge rejected the notion that the environmental review underlying a presidential permit for a pipeline was unreviewable, but he still ultimately sided with the government in the case.

Center for Biological Diversity attorney Amy Atwood, who is representing the group in the lawsuit, argued that the issue is not settled law.

"On presidential permits, as they like to call them under the executive order, courts are split," she said. "They’re sort of all over the place, really. It’s not like they’ve all concluded you can’t challenge them in court. … It is not a settled area."

CBD is joined in the lawsuit by the Natural Resources Defense Council, the Sierra Club, the Bold Alliance, the Northern Plains Resource Council and Friends of the Earth.

One feature of their complaint that could help with jurisdictional questions in court is the incorporation of the Interior Department, Parenteau said. The suit names both the State Department and Interior, noting that the agency’s Bureau of Land Management has jurisdiction over a pending right-of-way application for KXL’s crossing of 45 miles of federal lands in Montana. The environmentalists argue that BLM has no plans to supplement the 2014 environmental review to inform its decision.

"By saying, ‘Yeah, but here’s this agency that’s not insulated from suits for violations of NEPA and they have certain right-of-way approvals they have to grant … and they’re not entitled to rely on a deficient EIS in making their decisions,’ that’s intriguing," Parenteau said. "That’s a different wrinkle. I’m not sure how the courts are going to treat that."

Still, he argued, it’s not a slam dunk.

"It really is bootstrapping, that’s what I think the court is going to see," he said. "That you can’t challenge the State Department’s reliance on an EIS, so why should you be able to challenge BLM’s reliance on it?"

‘Where do you get off the treadmill?’

If environmental groups overcome the jurisdictional questions, experts say they could have more luck with arguments that the Trump administration flouted NEPA.

The lawsuit argues that the Trump administration improperly relied on the 3-year-old environmental impact statement to approve the pipeline. The groups say the EIS was flawed to begin with and is even less credible now.

The State Department’s recent decision acknowledges some changes but concludes that the 2014 document still "reflects the expected environmental impacts" and supports the agency’s determination that the pipeline is in the national interest.

But Parenteau argues that oil’s decreased profitability calls into question the EIS’s assumption that Canadian oil sands will be developed regardless of whether KXL is built.

"That alone undercuts the rationale that the State Department used that there’s no climate impact because this stuff is going to be used whether we say yes or no," he said.

On the other hand, energy law professor James Coleman of Southern Methodist University noted that courts would likely not find it reasonable to force the government to redo an EIS every time there’s a change in energy markets.

"[Environmental groups] will have a certain pragmatic difficulty with courts who say, ‘Wait a second, this has been delayed for so long. You’re saying now because of that delay, we have to entirely redo the analysis? Where do you get off the treadmill?’" he said.

The Trump administration’s answer to the complaint is due in about 60 days.