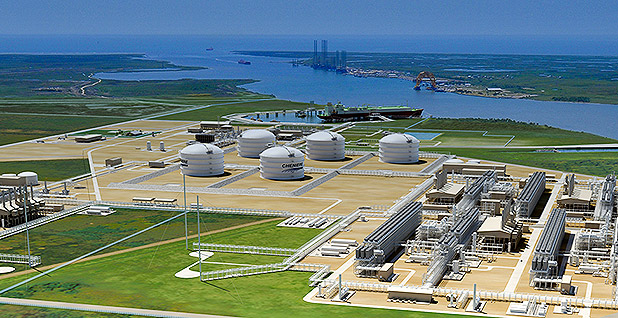 HOUSTON — Federal pipeline regulators today opened to the public a hearing on safety at the country’s first modern liquefied natural gas export facility after a request from E&E News.

The Pipeline and Hazardous Materials Safety Administration (PHMSA) hearing is about leaks in January from tanks at Cheniere Energy Inc.’s Sabine Pass LNG export facility in Louisiana. The agency ordered two tanks to be shut down after the leaks were discovered.

In the hearing room this morning, PHMSA officials indicated that they issued an enforcement order while investigating the leaks because they had difficulty getting answers from Cheniere in a timely manner. They said they were also concerned when they learned about earlier problems with tanks at the site. Cheniere officials responded that there wasn’t an imminent threat to public safety. They said their system was designed to handle the problems that occurred, and that their system worked.

Sabine Pass is the first of a new wave of LNG export facilities resulting from the country’s shale gas boom. The plant, which started shipping gas in 2016, has factored heavily in a reshaping of global gas markets around new market players. Last month, it announced a long-term LNG supply agreement with the China National Petroleum Corp.

Earlier this month, Maryland’s Cove Point became the second major terminal for LNG exports. Four more U.S. export plants are under construction, and another three have been approved.

PHMSA’s investigation into the January leaks revealed that Sabine Pass personnel had been grappling with a series of storage tank issues dating back to 2008, when it opened as an LNG import facility.

The agency’s "corrective action order" said that Cheniere had been unable to determine the cause of the leaks. It called on Cheniere to complete a thorough assessment of the problems before it could ask to resume use of the tanks.

‘Not open to the public’

Cheniere challenged the order and asked for today’s hearing. Such hearings have traditionally been closed, and when E&E News asked for information to attend, a PHMSA spokesman said, "Our hearings are not open to the public."

E&E News, with assistance from lawyers at the Reporters Committee for Freedom of the Press, made a formal request to attend in a letter last week to Alan Mayberry, PHMSA’s associate administrator for pipeline safety (Energywire, March 16). There was no response, and on Monday, E&E News and the Reporters Committee threatened legal action. On Monday evening, PHMSA officials agreed to open the meeting.

The meeting is taking place at PHMSA’s Houston offices. About 30 people are in attendance.

PHMSA issued the order more than two weeks after the leak incident, giving the agency’s first public notice that there had been a problem. Agency inspectors discovered that LNG had been leaking into a containment ditch around a storage tank. Further inspection revealed that natural gas vapors were leaking from 14 points around the base of a second LNG storage tank (Energywire, Feb. 12).

Cheniere’s appeal challenged PHMSA’s assertion that continued operation of the two tanks without fixing the problems would "be hazardous to life, property and the environment." The company said the order isn’t supported by the evidence or the state of the tanks.

Cheniere has said in regulatory filings that it doesn’t expect the Sabine Pass leak matter to have a "material adverse impact" on its financial results or operations.

PHMSA also hit Cheniere’s Corpus Christi pipeline subsidiary last month with a $207,800 fine for a "probable violation" of regulations on pipeline welding during construction of the pipeline.