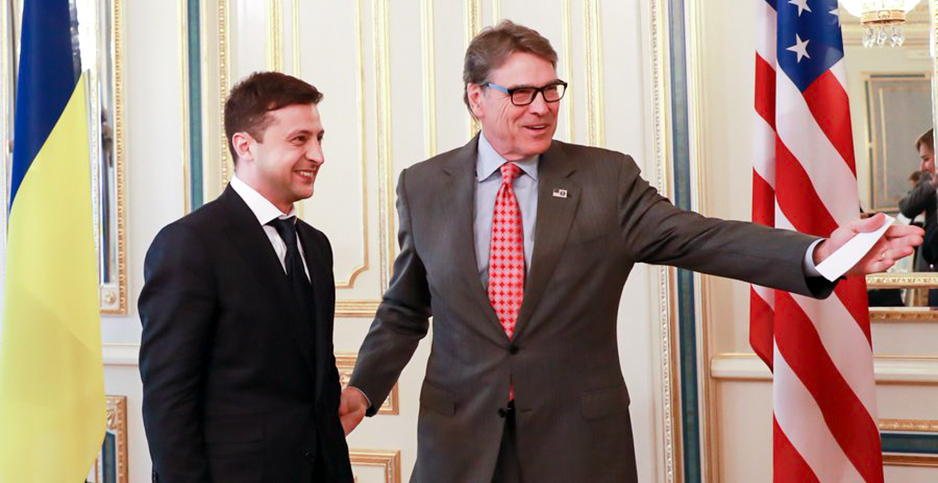 The whistleblower complaint, which led House Democrats this week to launch a formal impeachment inquiry against President Trump over allegations he pressured Ukrainian President Volodymyr Zelenskiy to investigate former Vice President Joe Biden and his son, also shed new light on Perry’s May visit to Ukraine.

The appendix says that Perry was sent to Zelenskiy’s inauguration after Trump ordered Vice President Mike Pence not to attend (Greenwire, Sept. 26).

While in Ukraine, Perry announced that Trump would sign legislation to sanction the Nord Stream 2 pipeline, a project backed by Russian oil and gas giant Gazprom that would carry Russian natural gas across the Baltic Sea to Germany (Greenwire, May 21).

It was the first sign from the administration that Trump would support sanctions on Nord Stream 2, which critics say would empower Russian President Vladimir Putin by making Germany and other European nations more dependent on Russian energy.

During a March meeting with Senate Republicans, Trump did not say whether he would support sanctions when the matter came up (E&E Daily, April 1).

But Perry’s announcement breathed new life into bipartisan efforts on both sides of the Capitol to place sanctions on the project.

Legislation targeting the vessels that would help construct the pipeline has since passed key House and Senate committees (Greenwire, July 31).

Sen. Jeanne Shaheen (D-N.H.), an original co-sponsor of the Senate sanctions bill, said yesterday she was unaware of the timing and location of Perry’s announcement, and said she had "no idea" if the news had any connection to Trump’s alleged courting of Zelenskiy.

However, Shaheen said she assumed that Ukraine wants to see Nord Stream 2 sanctioned. If the pipeline is constructed, it would "allow energy that’s now going through Ukraine, which Russia is paying for, to be able to totally bypass Ukraine."

"It’s a way of putting further pressure on Ukraine from Russia on energy," she added.

One energy analyst tracking the sanctions legislation highlighted the geopolitical importance of Nord Stream 2 to Ukraine.

"Implicitly or otherwise, Nord Stream 2 tends to loom over most conversations about Ukrainian security," said Kevin Book of ClearView Energy Partners LLC in an email yesterday. "Russian gas transit routes to Europe that bypass Ukraine have a way of focusing the mind."

Sen. Ted Cruz (R-Texas), the lead GOP sponsor of the Senate’s Nord Stream 2 sanctions bill, told E&E News yesterday that he was confident that Trump would sign the measure based on Perry’s comments in Ukraine.

"He indicated that publicly in the press, yes," he said in a brief interview.

Cruz shrugged when asked whether he saw any new significance to Perry’s remarks in light of the whistleblower complaint, which he said he hadn’t read.

Sen. Ron Johnson (R-Wis.), who attended Zelenskiy’s inauguration with Perry, told E&E News that he saw no signs during the visit that the move was intended to curry favor with the new Ukrainian government, including during a private meeting with Zelenskiy.

"Oh, hell, no; no, I don’t even recall talking about Nord Stream 2," Johnson said.

Sen. John Barrasso (R-Wyo.) laughed off any connection, saying he was "absolutely" confident the Trump administration was already heading toward that position.

He noted the presence of Pence when he and other senators discussed Nord Stream 2 with Germany at the 2019 Munich Security Conference in February.

"We’ve been pushing to block Nord Stream 2 since before Trump was elected president," he said. "And we’re going to continue to do that."

Senate Foreign Relations Chairman Jim Risch (R-Idaho), who moved the Nord Stream 2 bill through committee before the August recess, shrugged when asked about Perry’s cameo in the whistleblower complaint.

However, Risch said he was "cautiously optimistic" the measure would come to the floor in the coming months.