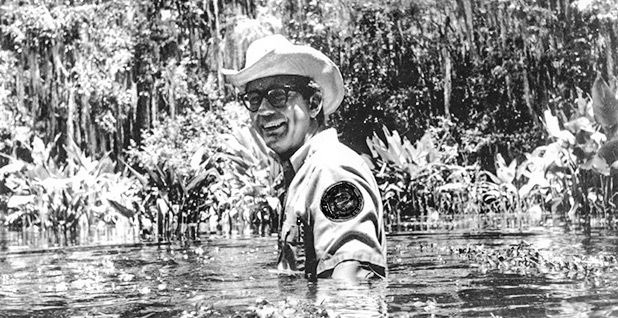 “Unlike most people who work on Everglades policies, Joe actually went into the Everglades,” said his wife, Louise Dunlap. “He was a true lover of nature." Photo courtesy of Louise Dunlap.

Joe Browder, a legendary environmentalist known for winning major battles to protect the Florida Everglades, died Sunday. He was 78.

He’s credited with helping to lead the opposition to the construction of a commercial airport on the western edge of the Everglades, pushing to add huge swaths of the fabled marsh and Biscayne Bay land and water to the National Park System, and securing protections for the Big Cypress Swamp.

"He was happiest in swamps and deserts," Dunlap said.

The Amarillo, Texas, native did a stint as a television reporter and producer for the NBC affiliate in Miami. "He loved it," Dunlap said. "Because he was bilingual, he was able to do a lot of interviews that other people couldn’t get." Browder left the news business in 1968 to work full-time on public policy alongside Florida’s most famous environmentalist, Marjory Stoneman Douglas, author of the landmark 1947 book "The Everglades: River of Grass."

He was hired as the regional representative for the National Audubon Society. His media connections came in handy, said Nathaniel Reed, a longtime Florida environmentalist and former assistant secretary of the Interior who worked closely with Browder.

"Nobody had the contacts that Joe had with the press," Reed said. "He had been a reporter, and he drank with them. He got all kinds of insights."

Elvis Stahr, the former Audubon president, used to say of Browder, "No other regional director ever used the annual telephone budget in one month," according to Reed.

When the organization pushed Browder to move to Atlanta, Browder pushed back. He said, "Heck, no, all the action is in South Florida," Reed said. "There are so many problems that it would be foolish to send me to Atlanta, because I would be in an airplane back and forth to Florida." The group relented, allowing him to remain in the Sunshine State.

Reed called Browder "the key man, in my opinion, who thwarted the opposition to the National Park [Service] becoming the owner and the manager of the Big Cypress." He was also "deeply involved in the creation of Biscayne Bay National Monument, which is now a national park."

The two worked together to battle the proposed Everglades Jetport, which was slated to be the largest airport in the world built on remote swampland.

"He and I worked hand in glove," Reed said. "It was a complete, utter sham, a boondoggle."

Browder and Reed sat in the front row at a 1970 public hearing over the jetport, Reed recalled, when the mayor of Dade County read off a long list of questions, responding that each concern was "under study." Reed "stood up and said, ‘Mayor, if the answer to 102 legitimate questions is going to be the same, ‘It is under study,’ you’re wasting your time,’" he recalled.

The mayor pointed at the two men and said, "You and Browder are white radicals. We’re going to build that jetport regardless of you two," Reed said. In the face of broad environmental opposition, work on the jetport was abandoned.

"We owe much to him," Reed said of Browder. "In Florida, he drove everybody stark raving mad because he took on the old guard. … He was Churchillian in the sense that he never gave up.

"Joe was a born pit fighter," Reed said. "That sums him up best. It was an era where Florida was changing — dramatically changing — and the environment all of a sudden became a major issue."

Browder went on to work for Friends of the Earth and the League of Conservation Voters.

LCV President Gene Karpinski said today in a statement, "Joe was an important environmental leader and a good friend for decades. We are so grateful for all that he accomplished, and we will all miss him a great deal."

Browder was co-founder of the Environmental Policy Center and coordinator for President Carter’s energy and environmental transition team. He later worked as a special assistant at the Interior Department during the Carter administration.

"Because of his Florida work, he got to know Jimmy Carter, who was governor," Dunlap said. "The year before Carter got the nomination, we would pick him up from National Airport in my yellow VW convertible," she recalled.

Browder met Dunlap in 1970 at a Senate Environment and Public Works Committee hearing. He had come to Washington to testify about the Big Cypress. Dunlap was working for the National Parks Conservation Association. They married a few years later in 1976, after co-founding the Environmental Policy Center.

Browder moved to the Washington, D.C., area in 1970. In 1981, he and Dunlap launched their own environmental consulting shop.

They lived in Fairhaven, Md., so they could be near the Chesapeake Bay.

"We never got vacation," Dunlap said, "so we decided to live in a place where we’re on the bay."