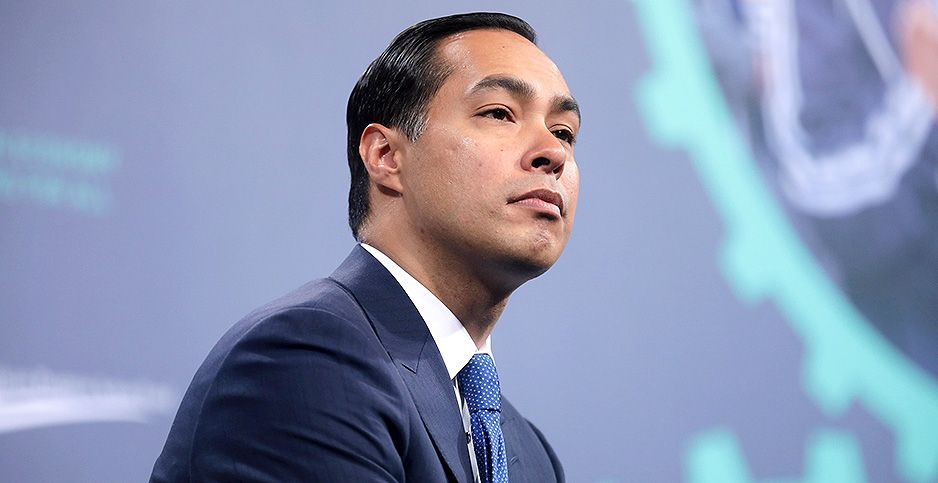 The No Fossil Fuel Money Pledge, in which candidates promise not to accept donations from leaders in the oil, natural gas and coal industries, is catching on in the Democratic Party presidential primary.

Fourteen candidates — more than half of the Democrats running for the 2020 nomination to take on President Trump — have signed the pledge, which is maintained by Oil Change U.S. and a variety of green groups. Other candidates are either considering signing on or have indicated they might.

The most recent signature came last week from former Housing and Urban Development Secretary Julián Castro, whose roots in oil-rich Texas made him a key target for the pledge’s organizers.

Castro sent out a tweet saying he signed on to the campaign "so you know my priorities are with the health of our families, climate and democracy."

The pledge is characterized in part by the showy nature in which climate activists try to get candidates to commit.

Often young, the activists frequently approach candidates during appearances and immediately ask them to take the pledge, while someone records the signing or the reaction.

The fact that the pledge is taking hold among Democrats shows how far the party has gone in pushing aside fossil fuels and trying to reduce the industry’s influence, while advocating their replacement with renewables.

"The No Fossil Fuel Money Pledge has become sort of a prerequisite for anyone who wants to be a climate leader in the Democratic presidential race," David Turnbull, spokesman for Oil Change U.S., told E&E News.

The group is the main keeper of the pledge, but it has help from organizations like Climate Hawks Vote, the Sunrise Movement, 350 Action and Friends of the Earth.

"I think that the situation we’re now in is that anyone who hasn’t signed the pledge has a major question to be asked about them, and that is whose side are they on?" said Turnbull. "Are they on the side of the American public, who is clearly concerned about the climate crisis and the role of the fossil fuel industry in delaying action, or are they on the side of fossil fuel executives who are solely focused on their bottom line?"

It’s the first presidential campaign cycle in which such a formal pledge against fossil fuel dollars existed and is being pushed on candidates.

For many of the signers, it is an extension of previous promises to avoid money from corporate PACs and lobbyists.

The pledge’s signers among presidential candidates, apart from Castro, are:

The ones who haven’t signed are:

The most frequent objection to signing is concern that fossil fuel industry rank-and-file workers would be shut out from the political process. That was what O’Rourke cited in April, before reversing himself in May.

In his unsuccessful 2018 Senate campaign, O’Rourke was the second-biggest recipient of fossil fuel donations across the country, mostly a reflection of the many oil and gas workers in Texas.

Turnbull said the pledge was built in a way that it only weeds out executives and lobbyists and doesn’t target the vast majority of employees.

"We focus on executives and political action committees and lobbyists because those are individuals and entities that are using their political contributions to curry favor in order to support their corporations’ interests," he said.

Hickenlooper argued that it’d be impossible for him to abide by the restrictions. At a New Hampshire campaign event in March, Hickenlooper initially said he would take the pledge when an activist with the New Hampshire Youth Movement asked him, according to a video the group recorded. He flipped later at the same event, after learning the details.

"I don’t know the people who write the checks. You can’t do that. I have no idea who writes me checks. We get a thousand checks a day. People write them all the time," he said.

Hickenlooper went on: "How can I sign this? You’ve made an impossible thing to sign if someone is going to run a race."

Turnbull, whose group frequently communicates with campaign staff before and after the signing events, said other campaigns have found no problem sorting contributions.

"If you’re serious about ridding the influence of the industry," said Turnbull, "you have to make that happen."

As governor, Hickenlooper frequently cooperated with the oil and gas industry on regulatory and policy matters, like negotiating the nation’s first methane emission standards for drillers.

His campaign didn’t respond to requests for comment on the pledge, nor did most other 2020 presidential campaigns.

Delaney’s staff said they are considering the pledge and its implications, but haven’t made a final decision.

"We have concerns that it could be overly broad," said spokesman Will McDonald.

"Hundreds of companies are listed," he said, "including very large employers that have numerous divisions that are unrelated to extraction."

Delaney, like most of the Democratic candidates, has sworn off PAC contributions. He is one of the more outspoken candidates on climate change, having put out a plan recently to enact a carbon tax, among other details.

A spokesperson for Bennet said he, too, was looking at potentially signing the pledge. He doesn’t accept PAC or lobbyist money.

Some notable candidates who haven’t made a final call on the pledge include Booker and Harris, who are vocal on climate change policy. Bullock, meanwhile, made reducing corporate influence over politics a main pillar of his campaign launch.

Biden, the primary race’s front-runner, has attracted the ire of activists following a Reuters report this month that he was preparing a "middle ground" climate policy that left room for natural gas, a characterization he pushed back on.

Ultimately, greens are shooting for the primary’s winner to be a pledge signer.

"My expectation is that the Democratic nominee for president is someone who is deeply concerned about the climate crisis, and understands that solving it means standing up to the fossil fuel industry. And signing the pledge is an important indication of that," Turnbull said.