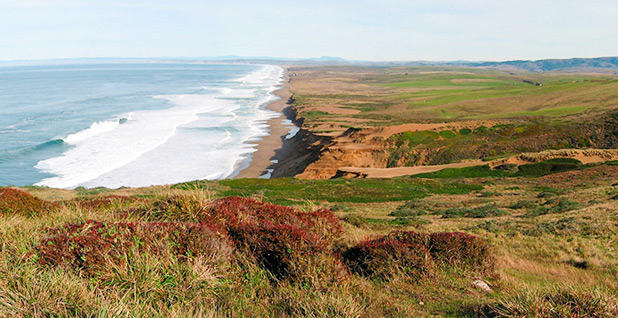 A novel lawsuit focused on Point Reyes National Seashore near San Francisco could provide a legal strategy for groups to challenge the management of dozens of other parks. Photo courtesy of NPS.

A lawsuit challenging cattle ranching at Point Reyes National Seashore could provide a novel blueprint for a deluge of litigation challenging the management of other national parks.

Three groups led by the Center for Biological Diversity took the National Park Service to court in February over its continued support of ranching on 18,000 acres in the park about an hour north of San Francisco (Greenwire, March 14).

The lawsuit challenges NPS’s general management plan for the seashore, which hasn’t been updated in 36 years.

Last month, a federal judge greenlighted the case, rejecting NPS’s efforts to dismiss it. She held that the relevant law says NPS "shall" update general management plans in a timely manner.

The order caught the attention of other advocates who have long said NPS has been delinquent in updating general management plans, or GMPs, at countless parks.

"We were struck by the court ruling that [there] is a mandatory duty" to update the plans "and rejecting the Park Service’s defense that the term ‘timely’ didn’t have a specific clock attached to it meant it was in their discretion," said Jeff Ruch of Public Employees for Environmental Responsibility.

GMPs are supposed to lay out the priorities for a park, including visitor, resource and recreation policies. Historically, parks update their plans about every 20 years, green groups said.

In June, PEER released a report examining the status of GMPs at 59 national parks, 19 national preserves, two national reserves, 18 national recreation areas and 10 national seashores. (There are a total of 413 units in the park system.)

The group found that 51 of those 108 studied units either had an outdated GMP or lacked one entirely. That included the Grand Canyon in Arizona, whose GMP lapsed in 1995, and the Great Smoky Mountains National Park in North Carolina and Tennessee, the most visited park last year (Greenwire, June 30).

Ruch said that based on PEER’s count, the group could bring "70 such suits" challenging outdated GMPs at park units across the country.

He added that the group would have to consider each park and GMP on a case-by-case basis but that the litigation strategy "is actually something we are considering."

Ruch and others emphasized that they couldn’t challenge NPS’s overarching policy for GMPs across the country. However, they said cases could be filed to challenge specific aspects of a park’s management that should be addressed in a GMP.

"If there was some activity — like in the case of Point Reyes, where there was commercial leasing" to ranchers — "certainly that would be a good avenue to get at that and get the Park Service to evaluate that activity," said Jeff Miller of the Center for Biological Diversity, who filed the Point Reyes lawsuit.

NPS spokesman Jeffrey Olson countered that the agency is moving to a more nimble framework that includes a "portfolio" of planning documents.

GMPs are part of that, he said, but so are foundation documents, which lay out the priorities for a park when it is established.

Instead, Olson said, NPS is seeking to focus on particular issues at a park such as resource management, cultural landscape inventories or climbing management plans and to develop policies as needed.

"That allows us to work on more specific issues, allows us to be more timely, and it does save us money," Olson said. "It helps us spend our limited resources more effectively."

Still, the legal strategy proposed by Miller and Ruch could put NPS in a bind.

Denis Galvin, an NPS retiree who served as deputy director during the Reagan, Clinton and George W. Bush administrations, called the Point Reyes lawsuit "interesting" and admitted that he has "actually thought of such a lawsuit in the past."

"There is an obvious legal requirement for a park to have a general management plan," Galvin said.

The lawsuits could hamstring the Park Service, Galvin said, because the agency doesn’t have the resources to update all of the system’s GMPs.

"The problem is that there isn’t enough money to do all the old decrepit plans that are out there," he said.

Olson of NPS estimated it can take three years to a decade for a full GMP update, at a cost of hundreds of thousands of dollars.

Advocates, however, take issue with NPS’s new portfolio approach. They argue that GMPs are necessary to lay out the overarching goals and priorities of a park.

"By doing ad hoc planning for just a component," Ruch said, "they may be missing a lot of connections."

Whether groups pursue challenges of GMPs in court may hinge on whether the Point Reyes lawsuit is ultimately successful.

Galvin said he thinks the legal arguments will largely focus on administrative discretion in when and how often to update the Point Reyes plan. If that’s the case, the court could easily defer to NPS’s judgment.

"What will probably come into question in court is whether or not — and by whose judgment — is the general management plan out of date and how significantly is it out of date," she said.

There is no firm deadline for NPS to update GMPs, Loomis said.

Loomis added that there is also some question as to whether it is worth challenging outdated GMPs because it is unclear just how binding the documents themselves are on NPS’s management of a park.

"What are the standards they are held to? What constitutes a general management plan being inadequate or out of date?" Loomis said, adding that all those questions have yet to be answered by a court.

And even if a group obtains a ruling from a court that NPS must update a GMP, there is no guarantee that the eventual update will be to the group’s liking.

Ruch said PEER would consider a lawsuit challenging a park’s outdated GMP with the goal of forcing NPS to update the unit’s visitor carrying capacity.

Lawsuits, Ruch acknowledged, are a risky gambit when the goal is forcing NPS to draft thorough policies.

"The idea of litigation as a tool to force thoughtful planning is a little awkward," Ruch said. "The question is whether or not you could force them to deliver more than a ham sandwich."