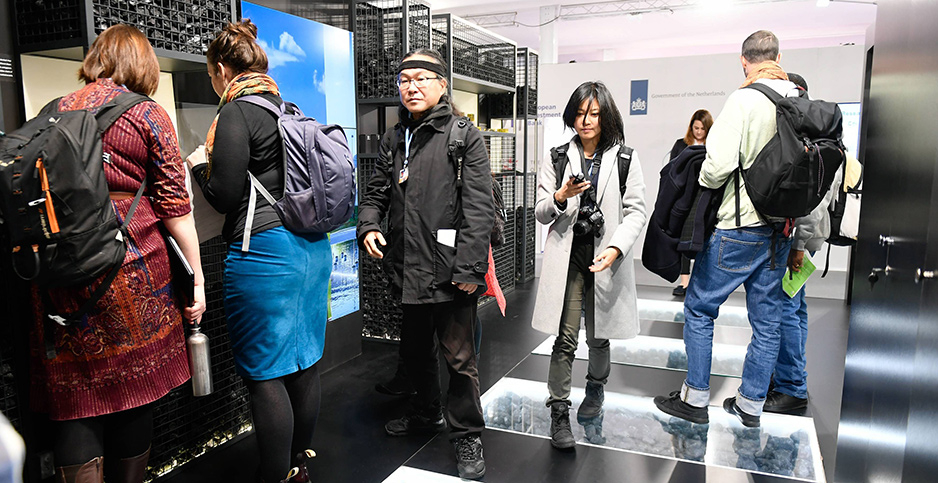 The future of the Paris climate agreement is being charted now in a Polish city that proudly displays its coal-mining heritage.

The U.N. climate talks that began Monday in Katowice, Poland, aim to finish the Paris "rulebook" — implementing guidelines for the 3-year-old pact.

Failure to strike a deal by the end of next week would undermine global trust in the climate deal in the wake of a U.N. report last year that showed only a swift decarbonization could avert disaster.

"Leaders of the world, you must lead," British broadcaster and natural historian David Attenborough said at the conference’s opening Monday. "The continuation of our civilizations and the natural world upon which we depend is in your hands."

"Only global answers," he said, "can solve global problems."

But the meeting’s backdrop — a city in southern Poland whose growth was fueled by discovery of coal reserves in the mid-18th century — was odd, given the U.N. Intergovernmental Panel on Climate Change’s urging that the world reject coal almost completely by 2030 to have a chance of restraining global warming to 1.5 degrees Celsius and averting catastrophe.

Mohamed Adow, Christian Aid’s international climate lead, called coal’s prominence in Katowice a "slap in the face" to delegates, especially those from developing countries that are most vulnerable to climate change’s impacts.

"It is like an arms dealer sponsoring peace talks," Adow said.

Poland is strutting its coal mining history in Katowice.

The state-owned coking coal company, Jastrzebska Spólka Weglowa SA, is the first corporate sponsor of the conference, followed by its state-owned utility company PGE Polska Grupa Energetyczna SA, which burns more coal than any other power company in Europe, and the Katowice-based Tauron Polska Energia SA, which owns coal mines.

The host city’s official booth at the conference features large cages full of coal and household products made of ash.

Magda Smokowska, a spokeswoman for the Polish presidency of the summit, defended JSW’s involvement, which included buying uniforms for conference volunteers.

"JSW is fully aware of emerging changes in climate; that is why it is diversifying their activity towards low-emission, innovative solutions, which already has led to significant progress," she said.

She touted the company’s corporate carbon program, which includes the use of electric cars, methane-based energy from mines and renewable power from photovoltaics.

As for Katowice — the capital of the Silesian region — it’s "one of the greenest cities in Poland," with 40 percent forest cover, although participants at the talks say the city of 297,000 people was blanketed in a thick smoggy haze.

The Conference of the Parties’ unique branding is not the only issue summit participants have raised with Poland, which is taking its third turn as conference chair since the U.N. Framework Convention on Climate Change was ratified in 1992.

The team under COP President Michal Kurtyka is said to have started slowly in staffing up and engaging with participants this year, and there are varying levels of confidence that it will be able to reconcile competing positions and priorities that have persisted through the year’s negotiations.

A European representative said the Poles were perceived as lagging behind the work done by French diplomats who spent two years crisscrossing the globe to make preparations for the landmark 2015 Paris conference.

"But I think people don’t expect in agreeing on a rulebook that the presidency would need to bring the same degree of capacity that the French brought to negotiating a treaty," that representative said. "And I don’t think people expected Poland to have the same capacity as France anyway."

By October, the Poles had finally assembled a small diplomatic corps to engage in some shuttle diplomacy in hopes of ironing out some issues that have dogged the negotiations on subjects like international verification of emissions reductions and advance notice of finance commitments.

Andrew Light of the World Resources Institute, who was on the U.S. State Department negotiating team five years ago during the Warsaw climate talks, said the Poles ran a smooth and productive meeting there despite COP President Marcin Korolec’s being fired from his day job as the country’s minister of the environment in the middle of U.N. talks.

"The Warsaw meeting was really in danger of imploding over a couple of things, but especially loss and damage," he said, referencing the set of issues related to unrecoverable losses suffered by poor countries from climate change.

Obama-era State Department officials faced off with diplomats from small island states on the issue, and Korolec managed to help broker a delicate agreement that became the Warsaw International Mechanism for Loss and Damage — the first official home for that set of issues in these talks.

"So I think there are very skilled people still around from those days who hopefully will pull off a good meeting," he said.

But some environmentalists worry that this year’s Polish presidency is emphasizing three side issues over the Talanoa Dialogue, an exercise next week that is aimed at spurring more global climate ambitions, or even over the Paris rulebook.

In particular, the Poles are promoting the Silesia Declaration on Solidarity and Just Transition for adoption at the close of the talks next week.

Among other things, the document calls on parties to "recognize the challenges for sectors, cities and other subnational authorities highly dependent on fossil fuels and high emitting industries, and the need for national governments to ensure a decent future for workers impacted by the transition to a low greenhouse gas emission and climate resilient economies."

While the document has support among advocates and was drafted by the European Trade Union Confederation, albeit with input from Polish trade unions, some greens worry it’s a Polish attempt to put fossil fuel workers on the same footing as those whose livelihoods are threatened by climate change.

Jennifer Morgan, executive director of Greenpeace International, said in an interview that there was hope that the Katowice talks would raise the profile of Polish progressives.

"If you look at the different municipalities as far as opposition to new coal mines, support for stricter regulation, support for actually changing the law so that there will be greater renewable energy entering into the system," she said, "it’s quite separate from what the national government is proposing."

But environmentalists have so far been disappointed. Greens gave Poland the ignominious "Fossil of the Day" award Monday after Polish President Andrzej Duda opened the conference with a speech in which he argued that coal use and climate protection were compatible and Poland would continue to use coal indefinitely.

The main business of the talks is to deliver a Paris "rulebook," settling dozens of outstanding questions about how the deal will operate and seek to achieve its goal of keeping warming to well below 2 C, with efforts toward the 1.5 C that the Intergovernmental Panel on Climate Change (IPCC) warns is the safe limit.

"In some ways, the biggest challenge in Katowice is just going to be the sheer amount of text that’ll be produced," Todd Stern, the special envoy for climate change under President Obama and a lead architect of the Paris deal, said at a recent Brookings Institution briefing.

Some of the most contentious issues that negotiators grappled with at midyear talks in Bonn, Germany, and Bangkok broke down along lines between developed and developing countries and deal with how countries share information about their nationally determined contributions (NDCs) to Paris. The countries are being called on to update their contributions and — advocates hope — strengthen them on a five-year cycle.

Another issue that will demand attention is the finance that rich countries have promised to help provide for poor ones and how that will be communicated.

"Paris was a breakthrough, but Paris has to be … brought to life in an operational sense by the rules … that will hopefully get agreed to at this COP," Stern said.

The United States, the European Union and other developed nations have demanded a robust set of rules on reporting, monitoring and verifying NDCs that make the same kind of requirements of most or all parties.

Stern and U.S. officials have warned their international partners that rules that re-establish separate responsibilities for developed and developing countries — the "firewall" that was demolished in Paris — could keep the United States permanently out of the deal, even under a Democratic president.

They want common methodologies for calculating and reporting progress toward NDCs and a role for expert and peer review of national disclosures that countries like China oppose. Paris offers flexibility for developing countries in meeting transparency requirements, but developed countries say that’s for the poorest countries that genuinely lack capacity, not major economies.

The African Group, meanwhile, has spent the year demanding that donor countries in the north boost their own transparency, especially around what they plan to offer in climate aid. Reporting that in advance, the group argues, will help poor nations prepare to use finance streams wisely to reduce their own emissions and shore up defenses against climate change.

The countries most vulnerable to climate change plan to keep the spotlight on ambition, and especially the IPCC’s October report on the need to keep warming below the 1.5 C threshold. That will mean a hefty investment, and rich nations have offered few details about how they plans to make good on their promise to mobilize $100 billion a year by 2020.

"The Special Report makes it clear that the world is perilously balanced on the edge of a climate precipice," Amjad Abdulla of the Maldives, chief negotiator for the Alliance of Small Island States, said in a statement. "A failure to act now risks pushing us beyond a point of no return with catastrophic consequences for life as we know it."

That’s the message, too, of the Talanoa Dialogue, which will be held in Katowice on Tuesday and Wednesday. The dialogue was sparked by the Fijian presidency of last year’s conference, which will co-lead it with the Poles, although participants say the Poles have seemed less involved.

The sessions, which have been going on all year and all over the world, borrow a Pacific island tradition of storytelling to enhance empathy.

They are far from traditional negotiating sessions.

In those sessions, a dozen or so participants meet in a roundtable setting to grapple with a question raised by the presidencies, such as "How do we get there?"

Michael Lazarus, senior scientist with the Stockholm Environment Institute’s U.S. Center, based in Seattle, plans to use his participation at next week’s dialogue to call for more urgency in light of the October IPCC report. In particular, he said, the world must begin to align its energy supply and production decisions with the Paris targets instead of focusing exclusively on demand.

"To the classic hard-nosed negotiator types, the Talanoa Dialogue is not the way that business classically gets done," Lazarus said. "But it could lead to an interesting call for greater ambition and some inspiration."