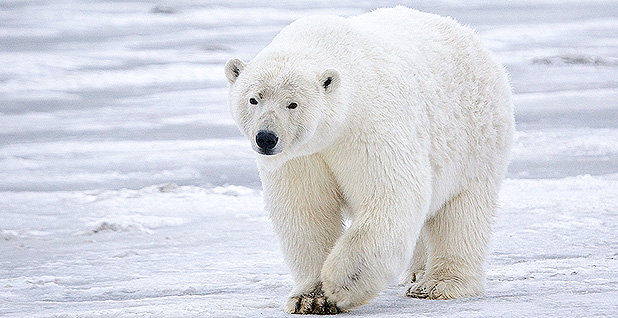 The Fish and Wildlife Service today said "decisive" action is needed to slow climate change and stop sea ice melting that threatens to wipe out polar bears in the Arctic.

But the plan — developed by a polar bear recovery team composed of researchers with FWS and the U.S. Geological Survey, along with Native American communities, the oil and gas industry, and conservation groups — makes clear the global warming that’s melting sea ice is the primary threat to the polar bears, which were listed in 2008 as threatened under the Endangered Species Act.

"The single most important achievement for polar bear conservation is decisive action to address Arctic warming, which is driven primarily by increasing atmospheric concentrations of greenhouse gases," says the 103-page plan, which focuses on two subpopulations of polar bears in the Chukchi and southern Beaufort seas.

"Short of action that effectively addresses the primary cause of diminishing sea ice, it is unlikely that polar bears will be recovered," it adds.

Today’s final conservation management plan follows a draft released in 2015. It also focused on climate change and rising global temperatures as the leading factor behind melting ice sheets, which bears rely on in the winter to hunt seals, their primary source of food (Greenwire, July 2, 2015).

But it’s not clear whether the incoming Trump administration will advance the goals and objectives set out in the comprehensive management plan, which, if implemented, will cost about $13 million between 2017 and 2021.

While reducing greenhouse gas emissions is the top action item, that’s not an issue overseen or controlled by Fish and Wildlife.

FWS, however, has committed in the plan to work with its partners to implement other management steps, such as reducing human-polar bear conflicts, working with the oil and gas industry to protect denning habitat, and minimizing the risk of contamination from oil and chemical spills.

"This plan outlines the necessary actions and concrete commitments by the service and our state, tribal, federal and international partners to protect polar bears in the near term," Siekaniec said in a statement. "But make no mistake; without decisive action to address Arctic warming, the long-term fate of this species is uncertain."

President-elect Donald Trump has labeled climate change a "hoax," and he has vowed to reduce federal regulations to promote more oil and gas development and mining activity on federal lands.

Among his Cabinet nominees is Rex Tillerson for secretary of State. Tillerson is a former CEO of Exxon Mobil Corp., whose actions and views on climate change have been debated for years.

But the final conservation plan follows a study last month that concluded global populations of polar bears will likely decline by 30 percent by 2050 due to melting Arctic ice (Greenwire, Dec. 8, 2016).

That study, led by the Fish and Wildlife Service, said there is a 70 percent chance that the polar bear population of 26,000 will decrease by a third in the next 35 years.

"Polar bears depend on sea ice for most aspects of their life history," the researchers wrote. "Anthropogenic climate change is the primary threat to the species because, over the long term, global temperatures will increase and Arctic sea ice will decrease as long as atmospheric greenhouse gas concentrations continue to rise."

And the final conservation management plan makes it clear that human-caused warming is melting the sea ice the bears depend on, and that if it is allowed to continue, the bears are unlikely to survive.

Indeed, the final plan includes "substantive changes" from the 2015 draft to more strongly highlight the threats of climate change and "emphasize the need to address anthropogenic causes of Arctic warming," according to an FWS document.

The final plan states that the recovery and survival of polar bears "turns on our collective willingness to address the factors contributing to climate change and, in the interim, on our ability to improve the chances that polar bears survive in sufficient numbers and places so that they are in a position to recover once the necessary global actions are taken."