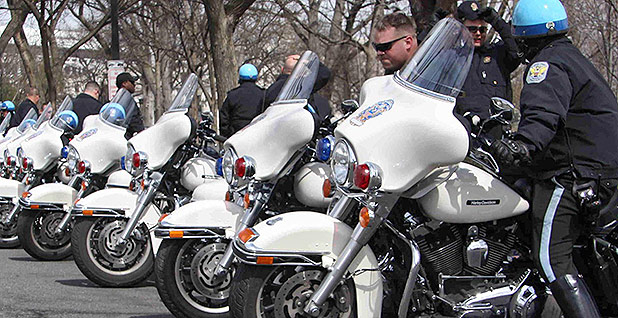 More people die in car crashes per mile each year on the Baltimore-Washington Parkway than any other National Park Service roadway.

Its 30 miles are vulnerable to car accidents, occasional crimes and drunken driving. But on many occasions, only two officers patrol it at night.

The U.S. Park Police can’t spare any more. According to its union, it now has 568 officers, with 23 more in training — 250 fewer than the staffing level recommended before the Sept. 11, 2001, attacks.

The agency has spent decades chronically understaffed. But officers and union officials are hopeful the Trump administration — and, specifically, Interior Secretary Ryan Zinke — will provide new support for a traditional police force that has long struggled in the shadow of its "flat hat" colleagues.

Their request: separation from the Park Service.

"I think the Department of Interior just needs to recognize that we have a very unique mission and unique purpose within federal law enforcement," said Ian Glick, chairman of the Park Police unit of the Fraternal Order of Police. "Part of that recognition is, ‘Yes, you work in Park Service areas, but your mission is not similar to the rest of the Park Service.’"

Zinke has told employees that he plans to reorganize Interior. Union officials hope that will extend to the Park Police, which they say should report directly to Interior’s assistant secretary. But Glick said they are also open to other options that allow for a "new direction in leadership."

Asked to comment on the request to be an Interiorwide force, Park Police Chief Robert MacLean said his agency "is proud of its heritage and proud to be part of the NPS."

He would not provide the number of officers on staff, in total or at specific park units. But he said his agency is "focused on ensuring a balanced presence in all of the national parks entrusted to us, including the Baltimore-Washington Parkway."

"Honestly, I don’t know a police chief in this country who would not like a larger budget and more officers," MacLean said, later adding: "The safety of our officers is extremely important and personal to me. The agency is dedicated to providing the best possible resources within authorized appropriations."

The Park Police can seem comparatively incongruous. Despite its name, it is an urban police force, employing officers who juggle as many responsibilities as their backcountry colleagues but without the romantic image.

They conduct murder investigations, respond to car accidents, search for the missing, gather intelligence. Instead of wilderness, they patrol parkways, roads and monuments in Washington, New York and San Francisco. They are experts on crowd control. They protect federal officials.

Several former and current officers expressed pride in their mission.

"The bottom line is, we’re here to do our job. I’m not going to climb a snow-packed cliff trying to rescue some idiot who broke his leg skiing," said Jeff Capps, a retired officer who worked in the vice president’s motorcade as senior motor sergeant. "But if you have demonstrations that are violent, I know how to fix that problem. Crowds? We know how to handle crowds."

Capps and other officers said the force is overworked, with judicious use of overtime and few opportunities to take days off. For big events, that means all hands on deck, with little time between shifts.

During President Trump’s inauguration, the force had 120 fewer officers than it had for President Obama’s 2013 inauguration, according to the union. The result was some officers getting a six-hour break between long shifts, Glick said.

He argued that the amount of overtime is affecting morale. Fewer officers also volunteer to patrol big events, meaning officers sometimes need to be taken off their regular beats, he said.

"What’s happening is that people are already working so much overtime, they’re getting burned out," Glick said.

The complaints are not new. The union has asserted for decades that the force’s size is not keeping up with growing threats and responsibilities. In 1999, an analysis from Booz Allen Hamilton backed them up: It recommended the Park Police increase its force to 820.

At the time, the Park Police had about 500 officers, even though it was authorized to employ 650. The analysis warned that the understaffed and poorly funded agency left the National Mall and nearby monuments vulnerable to attack, according to a 2000 article in The Washington Post.

Some experts criticized the report as alarmist, pointing out that the FBI, Secret Service, D.C. police and other agencies also patrol downtown areas and engage in anti-terrorism work. But others say the Park Police are unique — a federal law enforcement agency that has the capabilities of an urban police force.

Former Park Police Chief Teresa Chambers said Interior needs to make a choice: Adequately fund the Park Police, or be honest about what it can accomplish.

"I think there’s a false feeling of security that we sometimes give the community by trying to be everything all the time," she said. "If the Park Police is going to continue to dwindle or stay low, that needs to be shared with the community. You can’t be pretending that all is well on the Baltimore-Washington Parkway."

On an October day in 2002, a National Park Service official called Chambers into her office.

Chambers had been on the job for less than a year. Two snipers were at large in Washington; they would kill 10 people before police caught them. The NPS official wanted to ensure Chambers was not offering the Park Police helicopter to aid in the search because of the cost.

"Of course we were helping with air support. This is after the kid was shot going to school," she said in a recent interview. "I’m thinking, ‘Really, are you not hearing yourself?’"

Chambers was fired in 2004 for telling reporters that her department was understaffed. At the time, the Park Police had about 620 sworn officers — 50 more than it does today.

Chambers was reinstated in 2011, after the Merit Systems Protection Board ruled her firing illegal. She retired in 2013. But her frustration is still apparent.

The Park Police budget is "buried deep, deep, deep within an environmental organization known as the Department of Interior," she said. "We were a little gnat on the side."

Over the past decade, the National Park Service has seen its funding grow about 7.5 percent, when adjusted for inflation, according to the Congressional Research Service.

But the agency also struggles with a $12 billion maintenance backlog, and many parks are operating without a full staff. The number of law enforcement rangers has also dipped to 1,331 in 2016 from 1,547 in 2006, according to numbers NPS released to Public Employees for Environmental Responsibility.

In short, the Park Police is fighting for a piece of a limited pie. That could get worse as the Trump administration proposes to cut Interior’s budget by 12 percent in fiscal 2018.

When Chambers was chief, her department did not get a seat at the table for internal budget talks, she said. Instead, it was a virtual back-and-forth.

"It’s a paperwork flow. It goes up, and then we wait patiently like Oliver in the musical for a crumb. What’s going to be in our bowl?" Chambers said.

The tension increased in 2013, when Park Police officers were ordered to take one unpaid day off per pay period to cut costs during sequestration. It was the only federal law enforcement agency to do so during the across-the-board government budget cuts — even while the rest of NPS had no furloughs at all.

Officers were outraged, and the union warned it could affect safety.

But Park Police officers describe it as the time their own agency deemed them nonessential.

That cuts deep within a force that traces its roots back to the "watchmen" who likely patrolled federal land in Washington in the 1790s. The force did not join the Park Service until 1933, and its existence has been repeatedly questioned, according to a history posted on the NPS website.

Glick asserts that separating the two agencies will relieve the tension. The Park Police, he said, should be an Interior police force, not just a Park Service one. The union is also asking the department to increase the force to 1,000 officers in five years, allow some officers to take their work vehicles home and let the Park Police prepare its own budget proposal.

"We are not asking to be made a bureau of our own," he said. "We are asking the Department of Interior to recognize the unique nature of our mission."