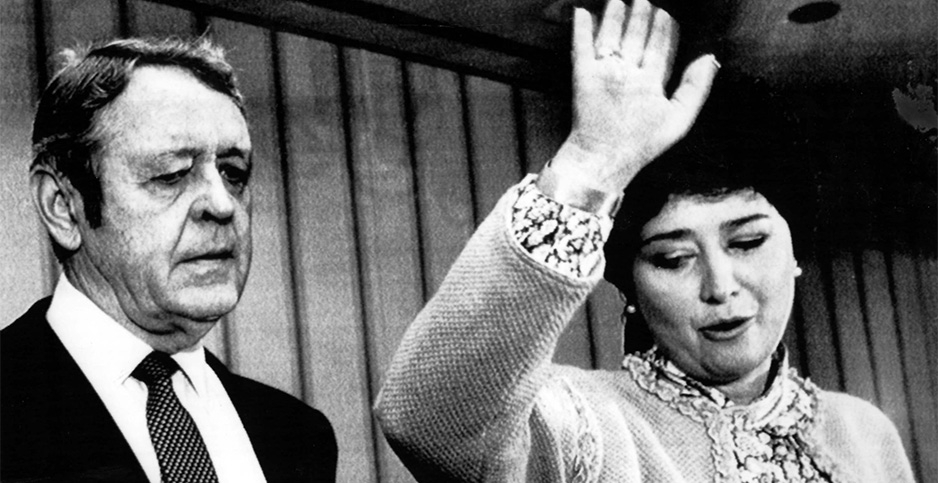 A top EPA staffer who worked for then-Administrator Anne Gorsuch Burford was accused of compiling a "hit list" that targeted certain scientists. Pictured: Burford during her farewell speech when she resigned from the Reagan administration amid scandals. Ira Schwarz/Associated Press

Those were the descriptions leveled at scientists serving on EPA’s advisory boards and written on an infamous document known as the "hit list." It led to a purge of dozens of researchers deemed threats to industry and conservative policies.

Political appointees of agency’s administrator at the time, Anne Gorsuch Burford, used the list to target and purge scientists. Several dozen members of science advisory panels were not reappointed after their terms expired, The Washington Post reported at the time. They were replaced with those who had reputations as political conservatives or who worked for industry. It was one of the many controversies that dogged Burford’s tenure at EPA. She resigned in 1983.

The EPA "hit list" was written on Heritage Foundation stationery and caused an uproar after it was published by then-Sen. Gary Hart (D-Colo.) and other congressional Democrats. It was written by Louis Cordia, a senior EPA employee in the Office of Federal Activities, which reviewed environmental and health effects of federal projects. Cordia had previously worked at the Heritage Foundation and on the Reagan administration’s EPA transition team.

In the EPA office where Cordia worked, the Post reported at the time, half of the career staff left. Scientists were reassigned to "clerical jobs such as the cutting and pasting of organization charts and hole-punching in documents that needed to be bound," the paper reported.

In a recent interview with E&E News, Hart said he exposed the list to show how politics had infused the agency’s judgment. He said it clearly demonstrated that the Reagan administration was tossing aside public health protections in favor of politics and industry concerns. Hart, who’s now retired, left the Senate in 1987.

Flash-forward to now. Some observers see similarities between how the Reagan EPA and the Trump administration have treated scientists.

Trump’s EPA administrator, Scott Pruitt, is remaking the agency’s science advisory boards. He issued a policy that defined researchers who receive EPA grants as having a conflict of interest, a move that caused many researchers to leave their EPA advisory positions. Industry-funded researchers, however, can remain on the boards.

An EPA spokesman has cast the reworking of EPA’s science advisory boards under Pruitt as the standard way of reflecting a new administration’s priorities.

Hart, meanwhile, sees parallels to the controversial moves made by the Reagan administration.

"It’s pretty predictable in terms of the philosophy of getting rid of regulation, and I guess it was predictable of President Reagan, and it’s predictable of President Trump," he said. "It’s one of the polarizing issues that separates the parties and the two ideologies. It affects not only economics, in this case the economics of energy, but it also affects the environment, it affects worker safety. If you start deregulating, there is almost nowhere to stop."

Cordia, speaking to E&E in a recent interview, said lists similar to his have been done under every administration. He said its portrayal as a "hit list" was "210 percent" overblown political rhetoric.

"Whoever was replaced by the Reagan administration was a person who replaced his or her predecessor, so was it a hit list when that person got on?" he said. "No, it’s a replacement."

He acknowledged that the list included political ideology but said that was an essential part of determining who would fit the agencies’ priorities as they shifted from the Carter era to the Reagan era.

Cordia is now a senior adviser for government relations and external affairs at the American Public University System.

Scientists targeted on the 1980s list said it showed a newfound willingness to discard expertise in favor of political posturing.

Nicholas Ashford, now the director of the technology and law program at the Massachusetts Institute of Technology, was described as a "menace" on the hit list who "definitely had to go," he said. It was stunning at the time, he added, since he was appointed under President Nixon and had developed a successful national cancer policy.

Ashford sees clear parallels between the purging of the boards now and the Reagan years. For one, he said, the Reagan administration’s explanation was that "previous administrations had their scientists, we want ours."

That echoes how an EPA spokesman explained the remaking of the Science Advisory Board under Pruitt.

The boards have traditionally had representation from academia, as well as nongovernmental organizations, labor unions and industry. In the 1980s, the priority was a covert stacking of industry-friendly voices at the expense of all the others, Ashford said.

"They don’t want intimacy, which is what the advisory committee function is meant to provide. Second, they don’t actually want science," he said, adding, "They’re against the facts. That makes it different because that’s very articulated in this period. The other parallel is that they do not want a particular viewpoint represented."

Matthew Meselson, a biochemist at Harvard University, compared his appearance on the list to his name being on another roster, Nixon’s infamous "enemies list" of political opponents. He was described on the EPA list as being "poison" and a "Nader on toxics." Meselson produced groundbreaking work on the dangers of DDT. He said he had a friendly relationship with Nixon and blamed his appearance on the lists as the type of work conducted by political operatives with an agenda.

"How this political operative sometimes [became] freewheeling and operating outside of the regular authority of their agency, I don’t know," he said. "It made some of us proud; I wasn’t particularly proud one way or the other, but I was amused. Maybe it’s something like that, where some particular guy had a bug up his you-know-what and [exceeded] his authority."

Whatever the reason for purging scientists, Hart expects the practice will continue for some time, as long as it is used to support a deregulatory agenda.

"It’s sinister to say we don’t believe the science, because that’s the way they justify taking the regulations away," he said. "It’s a backdoor approach to repealing the law. They can’t get enough votes to repeal some of these laws having to do with the environment, many of them came out of the Nixon years and that era, and so they do it through the back door and say the science is uncertain or we don’t believe in the science."