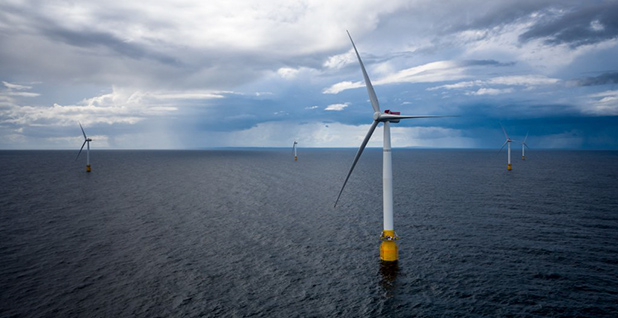 The Department of Defense has slowed talks on building floating wind turbines in the deep waters off California's central coast. Pictured is Equinor's Hywind project, the first floating wind farm in the world, off Peterhead, Scotland. Equinor

A scuffle between a recent Trump appointee to the Navy and a member of Congress has boiled over into the national defense authorization process and could keep negotiations alive over the first offshore wind turbines in the Pacific.

The controversy stems from a push by Rep. Salud Carbajal (D-Calif.) to promote wind projects off the shores of his district in spite of the Department of Defense’s conflicting claims to nearby waters. If built, the projects would be the first turbines off the U.S. West Coast and likely the country’s first to use floating turbines at scale.

DOD has for years objected to turbines in Southern and central California waters, but it has periodically shown itself willing to compromise. Last August, Carbajal convened closed-door talks with DOD and the Navy, which has a large footprint in nearby military bases and has played a prominent role in the talks.

As recently as February, those talks appeared to be progressing, resulting in the release of a map with areas marked out for possible development (Energywire, Feb. 20).

The rider accuses the Navy’s assistant secretary for energy, installations and environment, Charles Williams, of ignoring months of negotiations and making the "unilateral decision" that an offshore wind industry in California would be entirely incompatible with military activities.

"Legislating a solution to a specific energy development proposal should only be reserved for rare occasions," wrote Carbajal in his rider. "Due to Navy’s abrupt and unilateral decision to walk away from productive negotiations, after months of good-faith efforts by other stakeholders and public engagement, the threshold for congressional intervention has been reached."

It also would bar the Navy from unilaterally blocking offshore wind installations without first coming to Congress. And importantly, it would move authority over Morro Bay’s future from the Navy up to what sources call friendlier leadership at DOD.

Instead of a Navy office, the Office of the Under Secretary of Defense for Acquisition and Sustainment — an adviser to the Defense secretary — would be placed in charge of "all interaction" about offshore wind in California under the language. The rider would require DOD to brief Congress in the next six months on the status of negotiations, which have also involved the California Energy Commission and the Bureau of Ocean Energy Management.

In an interview yesterday, Carbajal said the plan reflects a "lack of confidence" in Williams’ willingness to work collaboratively and stressed that the bipartisan support for the rider language shows how serious the committee is about his efforts.

Developers have sought to jump-start an offshore turbine industry in California’s deep waters since 2016, when three consortia sent unsolicited project proposals to BOEM. The bureau responded by creating three "call areas" across the state’s coastline to judge wider interest from industry.

One of those call areas near Morro Bay, in central California, has been the focus of negotiations since it offers favorable conditions for developers but lies in waters that the military has said would be problematic for renewable development.

Officials at DOD have said turbines could interfere with radar and low-altitude flights and conflict with live-fire drills and rapid-deployment missions either in or around the Morro Bay call area.

As recently as February, Navy representatives said they were willing to figure out a compromise, however. A Navy liaison officer on offshore wind, Steve Chung, told E&E News then, "We absolutely support many of the [state’s] goals, whether they’re renewable energy, or economic vitality with regard to jobs."

Carbajal had also offered to sponsor a legislative compromise, at DOD’s request, that would ban turbines in some parts of the central California coastline in exchange for allowing them in other parts.

That offer was described by Carbajal and Navy spokespeople at the time as a possible way to reassure both parties that a compromise would be set in stone and protect military training areas from encroachment.

But according to a source with knowledge of the conversations between Carbajal and the Navy, a May call between the congressman and the recently confirmed Assistant Secretary Williams quickly turned sour.

"[Williams] said some things that were rigidly negative, and that was like a big breach of negotiating trust. That’s the best way I can describe it. There was this history of openness and dialogue and then this new guy comes in and throws it all away," the person said of the call.

A St. Louis real estate executive and longtime rear admiral who retired from the Navy in 2005, Williams was appointed by President Trump last November after his predecessor retired and was confirmed in March.

As East Coast states have leaped ahead to grow their own offshore wind industry, many developers and advocates in California have grown impatient.

In a June 30 letter, the American Wind Energy Association and a developer coalition known as Offshore Wind California told Carbajal and a second central California Democratic congressman, Jimmy Panetta, that federal authorities should hold auctions for an offshore lease "as early as possible in 2021."

"We do not see any need for further delay," they wrote.

Carbajal, a former Marine, represents a district that hosts two power plants — one gas, one nuclear — that are due to shutter over the next decade, making the prospect of offshore wind farms an important focus for him from an economic perspective. Those sites could also provide a grid connection for offshore wind projects, making the district prime territory for developers.

Carbajal said the closure of the Diablo Canyon nuclear plant in 2024 and 2025 will kill more than 1,000 jobs for his district as well as erase some 10% of the power currently meeting California demand. The state’s commitment to 100% zero-carbon electricity by 2045 and the replacement of good energy jobs in central California "go hand in hand," Carbajal said.

The offshore wind platforms planned in California, which would be fastened to the ocean floor with cables and float atop the surface, are part of a new, second-line generation of technology, since the coastal waters are too deep to handle traditional turbine types. Only a handful of floating wind turbines have been built internationally, and in the U.S., only a small pilot project in Maine is in the works.

But some deep-pocketed developers appear poised to bring the technology to scale in coming years. Equinor ASA, Norway’s state-owned oil and gas company, has said a 100-turbine, 800-megawatt floating project off South Korea will be operational by 2026.

Officials at the California Energy Commission are currently taking public comments on the map of new potential areas for development that was released by Carbajal, DOD and others in February.

Karen Douglas, a commissioner at the CEC, declined to comment on what led to Carbajal’s legislation. "You’re asking me about interactions I wasn’t part of," she said.

"We’ve got outreach to do, and we are carrying it out," she said. "We’ll see how it goes."