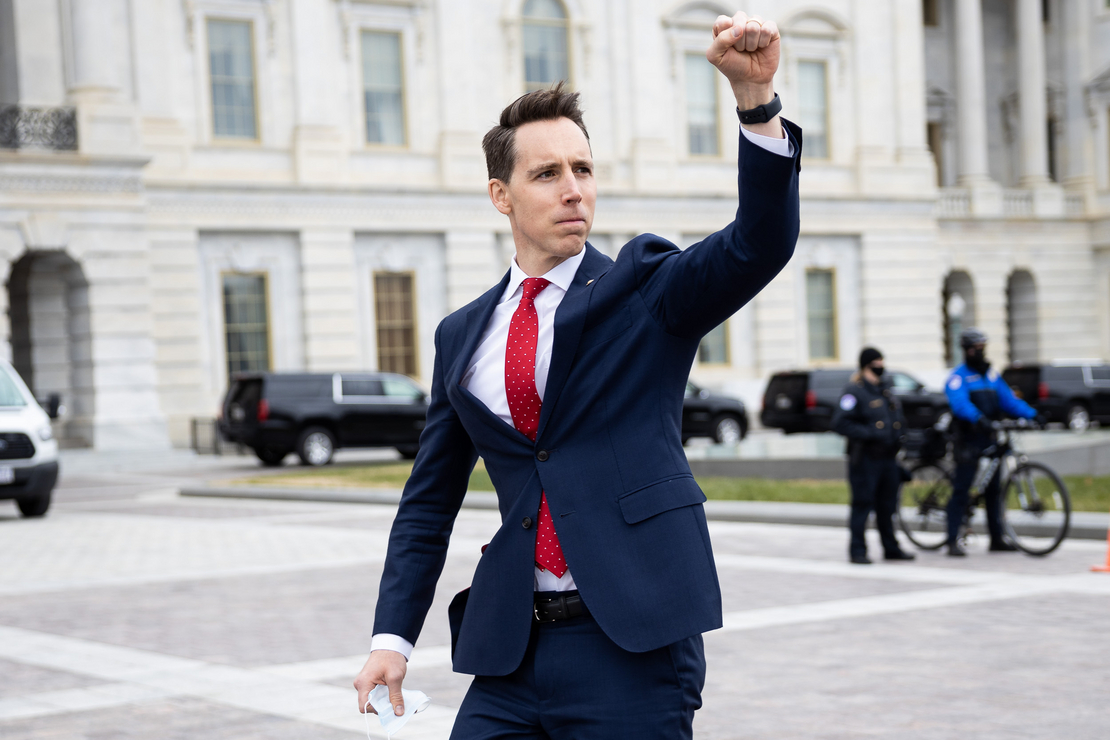 Sen. Josh Hawley (R-Mo.) gestured at demonstrators on Capitol Hill last year before a riot broke out that halted the process to certify the 2020 presidential election. Francis Chung/E&E News

POLITICO is demanding that Sen. Josh Hawley’s campaign stop using a photograph taken of the Missouri Republican by one of E&E News’ journalists shortly before the Jan. 6, 2021, attack on the U.S. Capitol.

Hawley’s campaign started selling mugs printed with a stylized version of the image, which showed him raising his fist to a crowd in front of the Capitol shortly before the violent attack. The attackers, who numbered at least in the hundreds, were attempting to stop Congress from certifying the results of the 2020 election, in which President Biden defeated former President Trump.

Attorneys for POLITICO, which acquired E&E News just over a year ago, wrote a cease-and-desist letter to Hawley’s campaign committee last month, saying its use of the image on political merchandise is an unauthorized violation of the company’s intellectual property rights and asking the campaign to stop selling the item. E&E News photographer Francis Chung took the photo.

“We do not authorize its use by the Hawley campaign for the purpose of political fundraising, which the campaign has been put on notice of by legal counsel,” POLITICO spokesperson Brad Dayspring said. “We are eagerly awaiting a response, but in the interim again respectfully ask that the campaign immediately cease and desist unauthorized use of the image.”

The company did not release its letter publicly.

“We haven’t received any correspondence from POLITICO or anyone else, but we are in full compliance with the law,” spokesperson Kyle Plotkin said. “Perhaps POLITICO can show us the correspondence they sent to the many liberal groups who also used the photo.”

POLITICO has allowed the Associated Press to license the Hawley photo for editorial purposes. AP did not respond to E&E News’ question asking whether Hawley’s campaign obtained a license to use the image, but the organization told Rolling Stone last month that it could not find “anything in our billing system” to indicate that the license had been purchased.

Plotkin did not answer whether the campaign paid to license the photo.

As of yesterday, the mug was displayed prominently on Hawley’s campaign website and in a pop-up that greets visitors — a far more prominent placement than when it first went on sale last month.

The mug, which can be bought for a $20 campaign contribution, says “Show-Me Strong!” under the image — a reference to Missouri’s nickname, the Show Me State — and does not appear to attribute the image to Chung, E&E News, POLITICO or AP.

“Liberals are so easily triggered, and this new mug is really whipping the left into a frenzy!” Hawley’s campaign wrote in a fundraising email unveiling the mug last month, which was also on sale at a Missouri Republican event. “Josh isn’t scared — he’s show-me strong! This Made in America mug is the perfect way to enjoy Coffee, Tea, or Liberal Tears! Check it out below, and order one for yourself or any woke friend or family member that you want to trigger!”

The photo of Hawley went viral internationally even before the Capitol attack, which was tied to five deaths, was over. Hawley led the unsuccessful efforts in the Senate to stop certification of Biden’s victory, and some of his opponents took his fist pump as an endorsement of the violent attack. Among others, the St. Louis Post Dispatch called on Hawley to resign following the attack, citing the fist pump.

Hawley defended the mug to HuffPost, which first reported POLITICO’s cease-and-desist demand. “It is not a pro-riot mug,” Hawley told the outlet. “This was not me encouraging rioters.”

He also defended the fist pump itself and said it was not about condoning violence toward police or others.