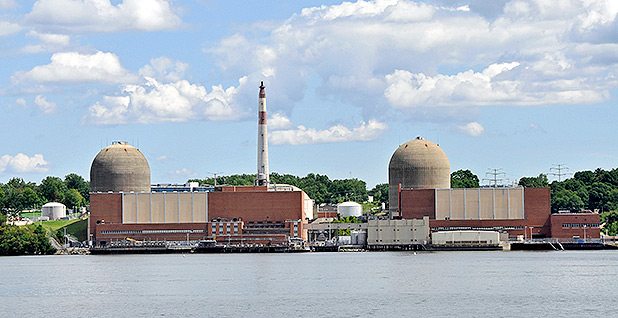 Cuomo reached a deal with Entergy Corp., environmental groups and the state’s attorney general to close the aging reactors, which are undergoing a license renewal. The governor for years has railed against the facility near Buchanan, N.Y., as a safety risk, citing the existence of earthquake threats, faulty equipment and evacuation hazards.

"For 15 years, I have been deeply concerned by safety violations at Indian Point, especially given its location," the governor said on Twitter this morning. "We’re going to shut it down."

Under the agreed-upon plan, Unit 2 at Indian Point will close in April 2020, while a second reactor, Unit 3, will shutter the following year. The plants would have operated through 2033 and 2035, respectively, had federal officials granted a license extension. A third reactor at the site was closed in the 1970s after its cooling system failed to meet regulatory safety requirements.

For Entergy, the deal represents both financial and legal relief (Energywire, Oct. 26, 2016).

Major shale gas discoveries in the Marcellus have driven down power prices by about 45 percent, or $36 per megawatt-hour, during the past decade, Bill Mohl, Entergy’s president of wholesale commodities, said in a statement. That dive has carved away annual revenues by about $160 million for nuclear plants like Indian Point.

With the early closure, the New Orleans-based utility will have completely exited from its merchant power business, a sector battered by cheap gas, low electricity demand and accelerating capital investments.

"Key considerations in our decision to shut down Indian Point ahead of schedule include sustained low current and projected wholesale energy prices that have reduced revenues, as well as increased operating costs," Mohl said. "We foresee continuing costs for license renewal beyond the more than $200 million and 10 years we have already invested."

Also part of the deal, Riverkeeper has agreed to withdraw legal challenges to Entergy’s license renewal.

Cuomo in a statement insisted the reactors’ closure — and subsequent loss of 2,000 megawatts of electricity — would not increase emissions or spike electricity bills.

The governor noted that New York has already upgraded the power grid and implemented efficiency measures to account for 700 MW, and up to 1,000 MW of additional hydropower will come online by 2021. Hydropower from Quebec and wind power from farms across New York have been floated as possible alternatives to the Indian Point plant.

If the state cannot bridge the gap, the deal Cuomo’s administration struck allows New York officials to operate the reactors in two-year increments through 2024 and 2025, respectively. Doing so would also allow the state to tackle any emergencies such as a terrorist attack affecting generation.

He said future emissions in the area would depend on the mix of resources used.

"There are some who argue that energy efficiency and hydro will be sufficient to replace the plant," he said. "There are others who believe that you will need natural-gas-fired capacity."

Environmental groups today applauded the deal and said New York’s Clean Energy Standard could help fill the void after the reactors are closed. The CES, approved this summer and now entangled in a legal battle, lays out a path for New York to get half its power from renewables by 2030 and grants subsides for three upstate nuclear reactors but none for Indian Point (Energywire, Oct. 20, 2016).

"Fortunately, Gov. Cuomo’s groundbreaking clean energy policies will ease the transition to safer alternatives that don’t produce dangerous waste or increase carbon emissions, such as energy efficiency, solar power, and both onshore and offshore wind energy," said Kit Kennedy, director of the energy and transportation program at the Natural Resources Defense Council. "NRDC will work to ensure that Indian Point’s power is replaced with the best mix of clean energy possible."