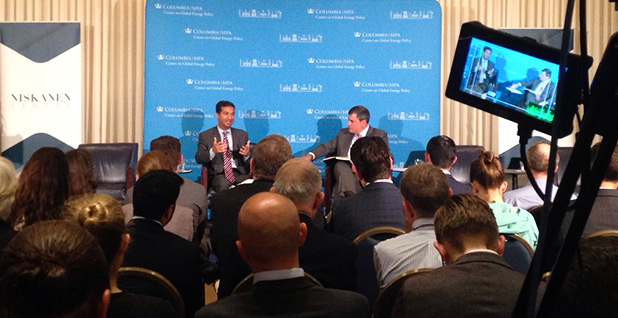 The Americans for Tax Reform president convened a press conference — in a room adjacent to where Curbelo spent the morning touting his bill — to issue a rebuke.

Speakers stood in a line in a small room in the National Press Club and took turns delivering remarks at the podium, as reporters and observers trickled in from Curbelo’s event next door.

Curbelo’s bill, Norquist said, is a political loser, both for the Florida Republican and for Democrats who will inevitably support it or offer their own ideas for a price on carbon.

Norquist promised carbon taxes would be an issue in November, one that could "cost Democrats the House."

But the fact remains that climate change and other environmental issues remain on the back burner in most campaigns, and Curbelo’s bill, unveiled yesterday, is almost guaranteed not to pass in this session of Congress.

Instead, some observers and climate hawks see the quick conservative rebuttal — as well as an anti-carbon-tax resolution that passed the House last week — as a warning shot to Curbelo and a sign that opposition to carbon pricing is starting to shrink.

"I see it as very much laying down the battle lines for 2019. Everybody is assuming that Democrats will take control of the House," said RL Miller, chairwoman of the California Democratic Party’s environmental caucus and president of Climate Hawks Vote. "So Curbelo’s bill is a signal that says, ‘I will cross party lines, and I may be able to bring a few of my Republican buddies with me.’"

Despite conservative opposition, carbon-pricing legislation will inevitably pass Congress, even if it’s not anytime soon, said Emily Wirzba, a legislative representative with the Friends Committee on National Legislation, a Quaker lobby organization that works with the Climate Solutions Caucus.

"The writing is on the wall," she said in an email. "Congress will pass bipartisan legislation to reduce U.S. greenhouse gas emissions, and this bill gets us one giant step closer to that reality."

One potential reason for the nearly 10-year gap is that both parties have historically paid a political price for supporting carbon taxes, said Marlo Lewis, senior fellow at the Competitive Enterprise Institute, who spoke at the ATR event.

Inglis lost his primary in 2010 to tea party insurgent Rep. Trey Gowdy. Democrats suffered landslide defeats the same year after the Waxman-Markey emissions trading bill passed the House, though those losses are generally attributed to a host of other political factors.

"The idea that a carbon tax is a conservative idea is preposterous," Lewis said in an interview. "I really believe it would be poisonous for the Republican Party — or the conservative movement — to embrace this."

In that sense, conservative opposition is simple, Lewis said. Implementing what some see as a regressive tax that’s not revenue-neutral tears at the fabric of conservative ideology.

But things have changed since then, said Alex Bozmoski, managing director at republicEn, an organization founded by Inglis that works with conservatives to advance climate solutions.

On one side are the "usual suspects" — ATR, CEI and the Heritage Foundation — that campaigned against the Inglis and Flake bill the last time around, Bozmoski said.

"They’re the same folks that have been sniping at climate action for decades," he said. "It is smaller than it was 20 years ago, because you don’t have the big oil companies participating anymore."

But there’s a much larger network of conservatives that supports climate solutions now than there was 10 years ago.

Lewis, too, acknowledged the shifting dynamic. Part of the reasoning behind the press conference, he said, was to respond to conservative groups that have emerged over the past decade to support a policy he sees as antithetical to the Republican "Energy Dominance" agenda.

Either way, Curbelo’s bill is an outward signal that momentum is building again for market-based approaches to reducing carbon emissions, said Greg Bertelsen, senior vice president at the Climate Leadership Council, whose founding members include energy companies and influencers.

The bill — formally introduced yesterday afternoon — has even gathered a Republican co-sponsor: Rep. Brian Fitzpatrick of Pennsylvania, who also voted against the anti-carbon-tax resolution last week.

"If you are of the mind that as an economy we should be lowering our carbon emissions, it is clear that the most effective way to do that is to put a price on carbon," Bertelsen said.

Give-and-take rather than ‘knee-jerk reactions’

Curbelo yesterday sold his legislation as a starting point that could help Republicans break the cycle of "knee-jerk reactions" to every carbon tax proposal.

But outside of the larger clash over climate politics, his bill illustrates the give-and-take that would have to play out between environmentalists and center-right groups for a carbon tax to become law.

For one thing, the legislation takes a surprising turn away from the approach that has been floated by most center-right groups in recent years.

Seventy percent of the $24-per-ton carbon price would replace the federal gasoline tax as the primary contributor to the Highway Trust Fund, rather than going toward dividends for households.

Rep. Earl Blumenauer (D-Ore.), who has introduced his own carbon-pricing legislation, said he would prefer most of the funds to go toward helping low-income families or stabilizing funding for Social Security.

"I think that there are simpler approaches to carbon pricing that are more direct," he said.

It would also implement a rolling moratorium on EPA’s greenhouse gas regulations, an effort to appease environmental groups that worry about conservative proposals to get rid of them.

"Conservative groups will push for revenue neutrality and for a firm requirement that no EPA regulations be implemented," said Rob Schuwerk, North American director for the Carbon Tracker Initiative, a climate think tank. "And then on the liberal side, they’ll be trying to prevent both those things."

Another potential problem for left-leaning groups is that the bill wouldn’t address emissions from the transportation sector, currently the nation’s largest producer of greenhouse gases.

"Unfortunately, this bill not only ignores the transportation sector but gives it a big, wet, sloppy kiss, with 70 percent of the funds going towards the gas tax replacement," Miller said.

Miller commended Curbelo for the bill’s regulatory design and his exclusion of liability waivers for oil and gas companies.

She, like other Democrats, still had reservations. But outside of policy discussions, she added, one thing is for sure: The bill will feed the beast.

"It’s great news for journalists and pundits because now they get to write lots of stories about Republicans who support carbon taxes," Miller said. "It’s going to fuel the talking head industry."