Polls show support for Newsom ahead of Calif. recall 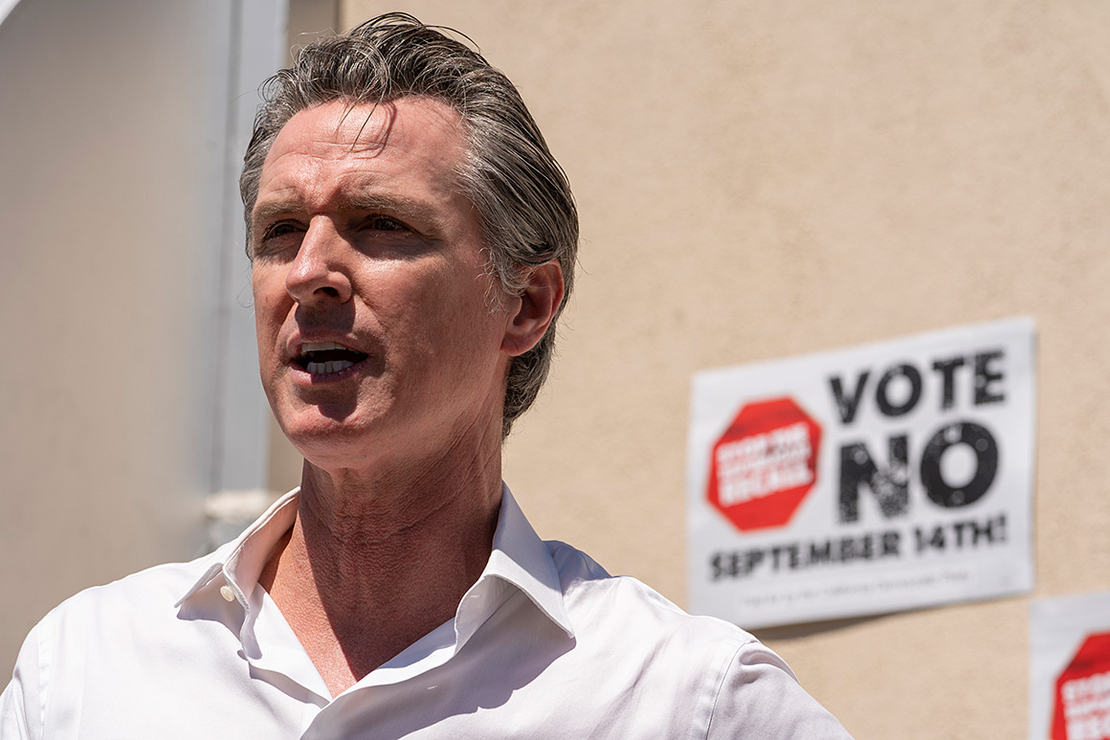 The latest polls show the Democratic governor prevailing by a large margin. A FiveThirtyEight.com analysis of multiple polls said that nearly 56 percent of voters want to keep Newsom, while 42 percent want him booted from office.

Newsom was helped by the fact the state mailed ballots to all registered voters, analysts said. About 35 percent of ballots have been returned. Of those, 52 percent have come from registered Democrats, 25 percent from registered Republicans and 23 percent from independent voters, according to Political Data Inc., a nonpartisan group that analyzes voting records.

Democrats outnumber Republicans nearly 2 to 1 among registered voters in the state. So many Democratic votes are in that even a large turnout by recall proponents on Election Day might not be enough to overcome the Democratic lead, said Paul Mitchell, vice president of Political Data.

Recall backers would make the race competitive if late-voting Republicans could narrow the gap with Democrats to around 15 percent, he said in an email. That gap right now is 27 percent.

Narrowing the Democratic lead to 15 percent "may be too steep of a hill to climb," he said. "Too many votes have been cast.”

The campaign to boot Newsom started because some residents were unhappy about his early mask mandates and business closures during the early months of the pandemic. It steamrolled when he was photographed — unmasked — eating dinner with health care lobbyists at the posh French Laundry restaurant in the state’s wine country.

The ballot asks voters two questions: Do they want to remove Newsom, and, if so, who should replace him? It takes a simple majority to recall the governor. If that happens, the candidate with the most votes will succeed Newsom, even if that person receives votes well below half.

A cluster of 46 candidates is running to replace the governor. Of those, conservative radio talk show host Larry Elder (R) leads in polls by double digits. Elder has support from 27.6 percent of voters among those picking a Newsom replacement, FiveThirtyEight said.

A Republican victory would shock the nation, as California is considered a Democratic stronghold. And, if elected, Elder or any other GOP governor would have some ability to stall action on environmental issues.

But a Republican governor would face opposition from a Democratic supermajority in both chambers of the state Legislature. That said, overrides of governor vetoes have been rare, noted Kim Nalder, political science professor at California State University, Sacramento.

"The [governor’s] powers are very limited by these things, but the one exception is emergency powers," Nalder said. "Gavin Newsom has been using those emergency powers pretty expansively, due to the pandemic, and a judge has upheld his use of those powers.

"So a Republican governor would have no reason not to try to claim emergency powers to push through whatever they had as their agenda," she added. That could include declaring wildfires to be an emergency and acting accordingly. It likely would trigger lawsuits, "but they could certainly take those actions initially," Nalder said.

A new governor could fire Cabinet heads — such as the secretaries of natural resources and environmental protection. The state Senate would need to confirm replacements, but an interim secretary could serve for a year. The same is true for the chair of the powerful California Air Resources Board, said Sragow of the California Target Book.

The other tool a Republican governor could wield is the massive megaphone of the governor’s office. Climate change is one area where several candidates differ from Newsom. He’s called warming "an existential threat" that demands nation-leading policies to fight it.

For his part, Elder has acknowledged that climate change is real. But "what I don’t believe in is climate change alarmism," he said during an interview with The Sacramento Bee‘s editorial board.

"I don’t believe as [Rep. Alexandria Ocasio-Cortez (D-N.Y.)] does," Elder said in that interview. "She said two years ago that if we don’t take dramatic action, we’re all going to die. That’s a paraphrase, but she said something to that effect. I think that’s outrageous. I think we’re smart enough to deal with the effects of climate change."

Paffrath, the Democrat leading in polls, supports a carbon tax, along with lower regulations to cut gasoline prices.

"By reducing regulation in coordination with a small carbon tax, California can raise more revenue WHILE lowering the cost of gas for everyday Californians," Paffrath wrote on his campaign website. His sole reference to climate change is saying that the state’s planned high-speed rail line would "take 71 years to become climate/economically neutral."

Faulconer, as San Diego mayor, supported that city’s climate change plan in 2015. Faulconer told E&E News at the time that he didn’t look at climate change "through a partisan lens."

If Newsom is recalled, the person who takes the governor’s seat would have limited time in power. The primary election for the November 2022 gubernatorial election is next June.

The state has a "top two" primary, meaning the top two vote-getters proceed to the general election, regardless of political party. That could render Newsom’s replacement a "lame duck" by mid-2022, said Nalder, the political science professor.

If Newsom prevails by a large margin, it could signal strength headed into the 2022 election, said Sragow of the California Target Book. In terms of Newsom’s actions on climate change, Sragow said, "it confirms what he’s doing."

"He’s squarely in the corner of doing everything that is feasible to fight climate change, and so what he’s getting is confirmation that he’s doing the right thing," Sragow said. "If he’s going slower than environmental advocates [want], it’s because he’s living in the real world. And he’s got to deal with the realities of what you can accomplish."

If Newsom keeps his job but by a slim margin, it could bruise him politically, Nalder said.

"There could be some Democrats who are looking for some blood in the water here, and might make a serious challenge," Nalder said.

The gubernatorial recall election is California’s second since 2000. A previous one in 2003 resulted in the recall of then-Gov. Gray Davis (D), and the election of Republican Gov. Arnold Schwarzenegger.

Voters blamed Davis for the debacle that happened when the state’s deregulated electricity market imploded following market manipulation by Enron Corp. and others. Former Republican Gov. Pete Wilson had overseen that deregulation.