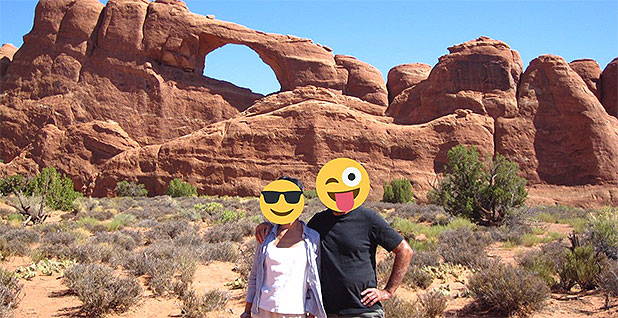 Supporters of the Twitter account that dubs itself the "unofficial 'Resistance' team of U.S. National Park Service" have been tweeting photos of themselves on vacation at national parks, including this one. Photo courtesy of @MayumiNarako via Twitter.

It began with an innocuous retweet of two goats — a post originally shared by Badlands — and then snowballed into more than 100 tweets over nine hours. Its third tweet summed up the purpose.

"Mr Trump, you may have taken us down officially. But with scientific evidence & the Internet our message will get out," it read. Another tweet declared that Trump "can take our official twitter, but you’ll never take our free time!"

The account claims to be the brainchild of "active" rangers at the National Park Service, along with friends.

"We are real," one tweet read. "Come visit us at Mt Rainer National Park. (We are in Washington)"

As of early this afternoon, the account had more than 423,000 followers, up from 8,000 before the Badlands tweets. And it wasn’t alone: Another alternative site, @BadIandsNPSFans, cropped up, tweeting out its own witty rebuttals to the Trump administration. It has gained 73,000 followers since its creation yesterday.

The accounts bolster the belief — whether mythical or not — that park rangers are going "rogue," resisting President Trump’s efforts to stop federal agencies from releasing climate change information. But so far, the Interior Department has asserted that none of the offending tweets came from current employees.

At Badlands, four tweets reciting climate facts were posted by a former employee, according to NPS. The agency says the park removed the tweets itself and was not ordered to do so (E&E News PM, Jan. 24).

Former Shenandoah National Park Superintendent Bill Wade mused that the popularity of the Badlands tweets was a combination of coincidence and the image of park rangers.

The Trump administration is not the first to tell parks to limit media interaction, Wade said. At the beginning of the George W. Bush administration, parks were instructed to "basically say we don’t have any comment." Agencies could also "overreact" at first, eager to not offend, then relax a few weeks into the new administration, he said.

But, he added, "it didn’t seem to me that it was as large in scope as this seems."

Official park sites have found ways to get around Interior’s ban on policy-related posts in more subtle ways.

On Monday, Golden Gate National Recreation Area tweeted about a report from the National Oceanic and Atmospheric Administration and NASA declaring 2016 was the hottest year on record. And yesterday, the Theodore Roosevelt Inaugural Site tweeted a quote that appeared to comment on the situation.

"Free speech, exercised both individually and through a free press, is a necessity in any country where the people are free," it reads.

Early this afternoon, the @AltNatParkSer account tweeted: "This account should not have to exist & we are sorry for any problems we are causing our colleagues. But we didn’t start this. #resist"