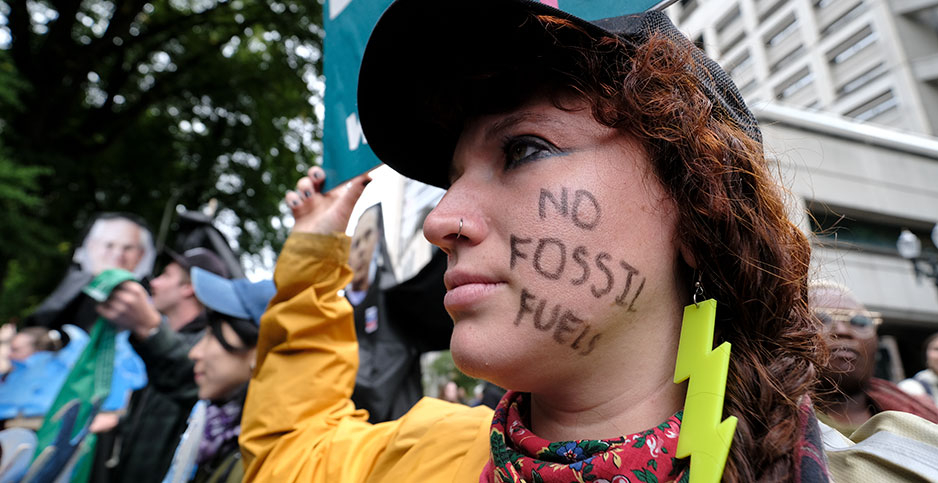 Public school educators in Portland, Ore., have a plan to teach global warming that far surpasses lessons on climate models or atmospheric conditions.

The school district is moving forward with a curriculum that will make climate justice a core component of the K-12 experience — a decision that sets Portland on a path that remains largely uncharted in the greater U.S. public education system.

Portland fourth graders, for example, may take a unit on "coexisting with the land," while eighth graders could study the social and environmental consequences of colonization. High schoolers might take units on everything from "systems of oppression" to the "age of revolutions."

Across all grade levels and subjects, the curriculum will emphasize climate solutions, engineering and community engagement, an approach supporters applaud because it has the potential to disrupt the traditional separation between formalized education and the "nuts and bolts" community work required to adapt to a warming world. It’s set to go into effect in the fall of 2022.

"[Our students] understand the gravity of the situation, the intensity of things," said Nichole Berg, who was hired by Portland Public Schools to spearhead the initiative. "They just don’t have outlets to do anything about it."

While the approach is clearly progressive, putting it into context is difficult. Climate education in the United States still is very much a scattershot affair.

That’s due in part to the reality that public schools’ lesson plans, standards and curriculums are determined on a local and state basis, rather than through a strictly federal approach. So when it comes to climate change, states, districts and even individual teachers retain substantial leeway regarding how — or if — they handle climate in the classroom.

Combine that with a topic that carries hefty political weight, and integrating climate into the sprawling U.S. public education system becomes even more nuanced, said Noah Feinstein, a climate education expert at the University of Wisconsin, Madison.

As is the case with evolution, Feinstein said "climate change is a politically difficult brand for teachers. And schools are under a lot of political scrutiny."

Portland’s plan is notable, too, for how it aims to have its climate curriculum cut across subjects, grade levels and — perhaps most importantly — socioeconomic divides.

In a "weather and climate" science unit, some of the schools’ youngest students would learn about shifting local weather patterns and the ways that communities can prepare for and respond to natural disasters. They also might be challenged to use classroom materials and build a device to protect Portland from global warming’s impacts.

Since September, Berg has worked closely with students, educators and "front-line communities" — those hit first and hardest by climate change — to solicit input regarding how the curriculum should ultimately take shape.

This feedback is important, she said, because different Portland school students have experienced "different levels of trauma" as the result of rising global temperatures.

A white student born in Portland, for example, likely would have a drastically different experience of climate change than a Portland student who was born in the Marshall Islands — a region under imminent threat from rising sea levels.

For starters, while many educators and schools around the country have begun teaching students about climate, there aren’t many places where districts are "systematically supporting this" — as is the case in Portland.

On top of that, Feinstein said Portland’s explicit focus on climate justice — rather than climate change alone — sets the district apart because it aims to ensure that "everyone, especially the people who are the most affected, has access to this sort of curriculum."

The district is taking a standards-based approach to curriculum development, which means the district’s core curriculum would be strengthened across the board. Berg called it a vital, "equity- and gap-closing strategy," because every single student would be expected to meet standards that promote climate literacy — regardless of academic ability or background.

Bilingual students, or students in special education classrooms, she noted, commonly miss out on cutting-edge learning opportunities because they have to focus on fulfilling traditional academic standards, like proficiency in reading or math. Incorporating climate justice into the standards framework would ensure they still can participate.

In addition, Berg said she is committed to ensuring that financial support for the new curriculum is intentionally — and equitably — allocated among the city’s schools.

This is key, Feinstein said, because developing and implementing an additional curriculum requires a significant allotment of resources, which often doesn’t bode well in schools strapped for time, teachers and cash.

"Not everyone is going to have the space or the support to employ that curriculum. If your school is being threatened with statewide sanctions because you need to get your math and reading scores up … it’s just not going to happen," he said.

That’s according to Eugene Cordero, a climate science professor at San Jose State University who in a recent study surveyed students who took a one-year course that focused on community engagement, "lasting environmental behavior" and climate solutions, among other topics.

Cordero found that five years after graduating from the course, the average student had shifted his or her everyday behaviors enough to reduce his or her carbon footprint by 2.86 tons per year.

And that doesn’t include the potential for the curriculum to affect students’ future career decisions, such as involvement in community organizing efforts. If scaled, Cordero said, climate education could be on par with other mitigation strategies — including rooftop solar, light-emitting diode lighting and even electric vehicles.

For Feinstein, a society that is well-educated on the causes and consequences of climate change is one that’s more capable of handling its impacts.

"Even if we stop emitting carbon dioxide today — which we’re not going to do — then our kids are going to grow up in a very different world," Feinstein said.