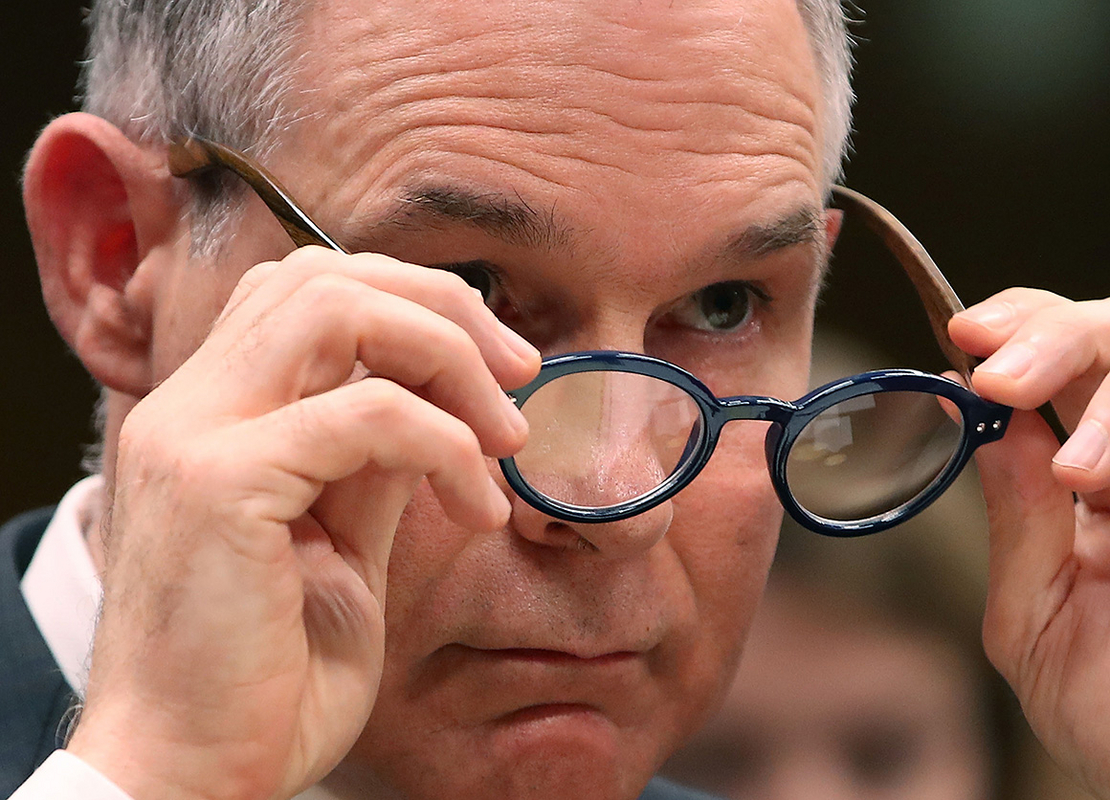 Scott Pruitt might not be able to count on old allies if he launches a run for the Senate in Oklahoma.

The former EPA administrator left Washington in 2018 under a cloud of ethics scandals and on bad terms with many onetime allies tied to Sen. Jim Inhofe (R-Okla.) and EPA.

As Pruitt mulls a run in this year’s race to succeed Inhofe, who is retiring, people in those circles tell E&E News they won’t be supporting him.

It’s a sharp turn from early in the Trump administration, when Pruitt — the former Oklahoma attorney general — hired many of his top staffers from Inhofe’s orbit on Capitol Hill. Pruitt’s Deputy Administrator Andrew Wheeler, his Chief of Staff Ryan Jackson and other high-ranking EPA aides were alumni of the Oklahoma senator.

But with Inhofe set to leave the Senate after 28 years, some current and former staffers for Inhofe are backing Luke Holland, the senator’s former chief of staff and chosen successor, to succeed their boss.

An invitation to a fundraising event for Holland on Monday shows numerous people from Inhofe’s orbit and the Trump EPA on the host committee, including Jackson; former EPA congressional affairs chief Troy Lyons; and Wheeler, who succeeded Pruitt as administrator.

Many also feel that Pruitt’s time at EPA, when he was accused of abusing government resources for personal gain, disqualifies him from office (Greenwire, Sept. 28, 2018).

“Inhofe never put himself before the people — Pruitt failed to learn that lesson,” said Alex Herrgott, a former Inhofe aide.

“Oklahomans expect a senator to put public service before their own interest. There are already two very experienced equally matched candidates on the ballot,” he said, referring to Holland and Rep. Markwayne Mullin (R). “Pruitt is just an unhelpful distraction.”

“He’s not going to find reception in the Inhofe bunch,” said another alumnus of the incumbent senator.

“Does he really have that little self-awareness?” asked a former EPA official under Pruitt. Both aides, as well as other people tied to Inhofe or Pruitt, were granted anonymity to discuss Pruitt candidly.

Sources told E&E News this month that Pruitt is considering running in the special election to replace Inhofe, who has four years left in his term (E&E Daily, March 18).

He has also been making calls to supporters and former aides about a possible Senate run since at least early March, said a source familiar with the calls.

The news came as a surprise to people who had followed Pruitt’s last stint in Washington, when he was then-President Trump’s EPA administrator in 2017 and 2018.

Pruitt’s political ambitions were widely known when he was EPA administrator. He reportedly told friends and associates in 2018 that he wanted to be Trump’s attorney general.

“I think he wants to be relevant,” said a Trump administration official who worked with Pruitt.

“It’s hard to describe how nuts he is and narcissistic and selfish,” that person said. “I think he’s stirring the pot and planting this stuff because literally no one is talking about him.”

Pruitt’s policy activity in the Trump administration was generally pleasing to Republicans. He worked aggressively to slash regulations and other environmental policies in areas like climate change, air pollution, clean water and chemicals.

But Pruitt was also entangled in a number of scandals related to ethics and other matters. He was accused of lapses like renting an apartment for well below market value from a lobbyist with business before EPA, having agency staff try to find employment for his wife, using a 24/7 security detail, spending $43,000 on a secure phone booth and retaliating against employees who pushed back.

He was pushed out in July 2018 by White House chief of staff John Kelly; although Trump’s tweets at the time claimed Pruitt had resigned (Greenwire, March 24).

Pruitt aides said the scandals were particularly hard on them and that Pruitt often made their lives difficult, and then burned bridges on the way out.

A different source, a former aide to Pruitt, felt he was wronged and blamed some staffers for it — the kind of feelings that might convince him he’s justified in seeking a Senate seat.

“There’s nothing that could fix that amount of delusion,” the aide said.

The Republican field has plenty of candidates, including Holland, Mullin, former state House Speaker T.W. Shannon and state Sen. Nathan Dahm. Former Rep. Kendra Horn is the only major Democrat in the race.

The filing deadline is April 15, ahead of the June 28 primary. If no candidate gets a majority of the primary votes, the top two finishers advance to an Aug. 23 runoff.

The size of the field, along with the runoff system, makes it difficult to forecast how the race could pan out, said Michael Crespin, a political science professor at the University of Oklahoma.

“Scott Pruitt has not been in the press in Oklahoma in quite some time. People probably haven’t thought about him much. But the last impressions of him are probably not positive,” Crespin said. “He was forced out of the Trump administration. I wouldn’t be surprised if the other candidates use that against him.”

Pruitt’s positives in the race might include his ties to Trump. The former president remains an overwhelmingly popular figure in the GOP with significant sway. His endorsement is prized, though he hasn’t weighed in on Oklahoma yet. Still, Pruitt’s work at EPA carrying out Trump’s agenda could be a positive in the deep-red state.

Pruitt has won some races in Oklahoma, including three state Senate races and two to be attorney general; Inhofe, a pilot, flew Pruitt to campaign stops during his first attorney general race. He lost a 2002 U.S. House race and a 2006 race to be lieutenant governor.

Pruitt has not responded to requests for comment about his potential campaign or to confirm he’s considering running.

But in an appearance on the radio show “Cats Roundtable” weeks before Inhofe’s retirement announcement, Pruitt, with almost no prompting, expounded on his views of the Senate.

“As you look at our democracy today, our republic, we need more adults in leadership. We need individuals at every level willing to speak truth and not to yield to partisanship. To be focused on that which is real and meaningful and objective,” he told host John Catsimatidis.

Inhofe, who backed Holland the same day he announced his intent to retire, declined to weigh in on a possible Pruitt run when asked, as did Oklahoma’s other senator, James Lankford (R), who has not endorsed in the race.

Sen. Sheldon Whitehouse (D-R.I.), an Environment and Public Works Committee member and one of Pruitt’s harshest critics, hoped that he wouldn’t come to the Senate.

“I think his disgraceful conduct as EPA administrator — so disgraceful that even the Trump administration couldn’t abide it any longer — ought to be a bit of a barrier for him,” he told E&E News. “But that will be up to the voters of Oklahoma to decide.”