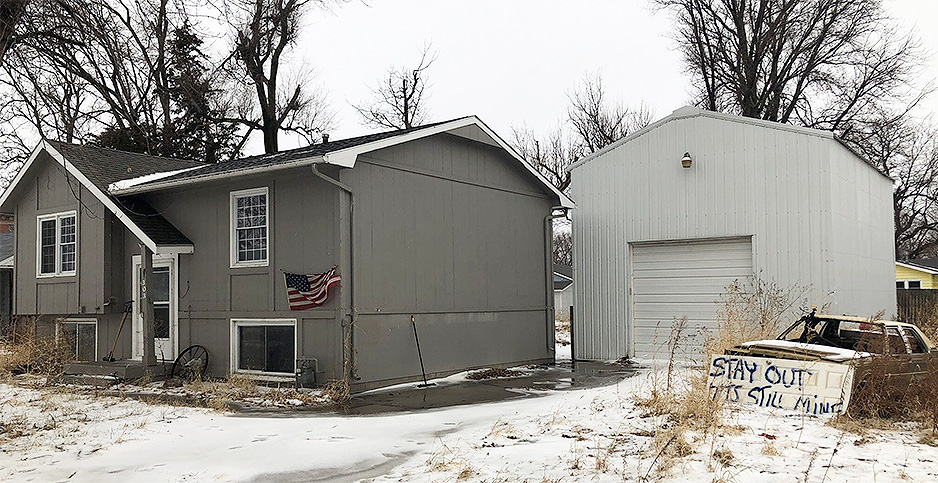 The floodwaters of 2019 may be gone, but in their wake are endless acres of rotting houses and ruined fields. Hundreds of homes along the Missouri River sit empty or condemned — abandoned in an exodus so large that local officials worry if the region will never rebound.

Blame, however, is abundant.

Not usually for climate change. Nor for the elected officials in charge of making their communities resilient to floods. Rather, it’s often aimed at the U.S. Army Corps of Engineers, which manages the Missouri River’s dams.

Just ask the residents of Hamburg, a devastated city on the Missouri River.

The town had already lost its high school before the flood; the closest approximation to a grocery is Casey’s General Store. At night, the only signs of life are a pack of dogs wandering the street and the electric glow from the town’s bar, the Blue Moon.

Inside, local residents think the town could maybe come back, if only the Army Corps would stop flooding them. Talk of climate change, and its long-term potential to unleash more big floods, is waved away.

"The corps will blame whatever they can," said Chad Sjulin, after buying a round of beers for the men fresh off their shift rebuilding nearby levees.

Talk turns to the senior homes that the city can’t afford to restore and the fields still covered with sand and toxic contaminants.

Each time, the conversation circles back to the Army Corps and why they didn’t do more to protect the locals. Some insisted the government was intentionally trying to flood them out to make way for endangered species habitat.

As the builders trickled out — most had work early the next morning — Elaine Payne, a longtime resident, explained their attitude.

"We have to hope it will be OK, even though we know it probably won’t," Payne said.

As Iowa prepares for the Democratic presidential caucus on Feb. 3, many residents in the region are barely paying attention; they have lives to piece back together.

Although several candidates visited this heavily Republican area when the floods were fresh, that attention has all but disappeared — leaving people in a congressional district that flipped blue in 2018 to instead rely on their local and state GOP officials, who mostly ignore the floods’ connection to climate.

There’s a good reason for that, one expert said.

While climate change is likely affecting the region’s weather patterns and boosting rainfall, it’s hard to say how much it contributed to the initial 2019 flooding, said Gene Takle, an Iowa State University professor who researches climate change in the region.

That’s because the Missouri River’s system of dams and reservoirs makes it hard to isolate the climate signal behind changing flood patterns, Takle said.

However, there’s more support for climate change exacerbating the serial flooding that followed the first March deluge. That later flooding was caused by record rainfall combining with oversaturated soil, he said.

"[It’s] making it more of a continuous flood," he said, rather than the seasonal floods the region is accustomed to.

Or, as it’s put by John Davis, a local climate activist and former staffer of then-Vice President Al Gore, the area is turning into the "Iowa bayou."

(The Army Corps didn’t respond to a request for comment. Democratic Rep. Cynthia Axne, the local congresswoman, has also pressed them for more information.)

Some of the residents who have stayed have drained their life savings trying to rebuild. They try not to think about the question that drove away their neighbors: What will the next flood bring?

"I’m going to start crying," Linda Harmon, a retiree in the hard-hit town of Pacific Junction, said as she pointed out her window to all the empty houses where her friends used to live. "My heart’s here … [but] they’re not coming back. And I’m going to miss them."

A team of contractors swarmed through Harmon’s kitchen and living room as she spoke.

When the floodwaters washed over her home in March, they dropped onto her roof pieces of the town’s namesake — railroad ties from the nearby junction of tracks. The workers had removed those, and now they were building up the interior to be more grand than before. The husks of her neighbors’ homes would get no such treatment; their doors were marked with big X’s.

Harmon is paying contractors out of her savings account. She had no flood insurance, because Pacific Junction wasn’t considered to be in the 100-year floodplain. And city officials want to keep it that way.

Ten feet of water covered the town for 30 days, local officials said. But they insist it was an aberration.

"I think what we got was our once-in-a-500-year flood," Pacific Junction Mayor Andy Young said.

Big floods hit southwest Iowa in 1993 and 2011, and Pacific Junction went through both undamaged.

Fewer than 500 people lived in town before the flood. Only about 1 in 4 have returned so far, and 150 households have put themselves on the buyout list, Young said.

Connie Turner, the town’s only female City Council member, has also dug deep into her family’s savings to rebuild her house. She has flood insurance, but it covers only a fraction of the damage.

Fear still grips her whenever the forecast calls for rain.

"It’s very, you know, traumatic," she said. "You’ll never get over it. You go outside and see all these homes that once held families."

"I don’t think there’s any way they’ll all come together again the way they did [for] that perfect storm," he said.

"That’s what you said last time," she said.