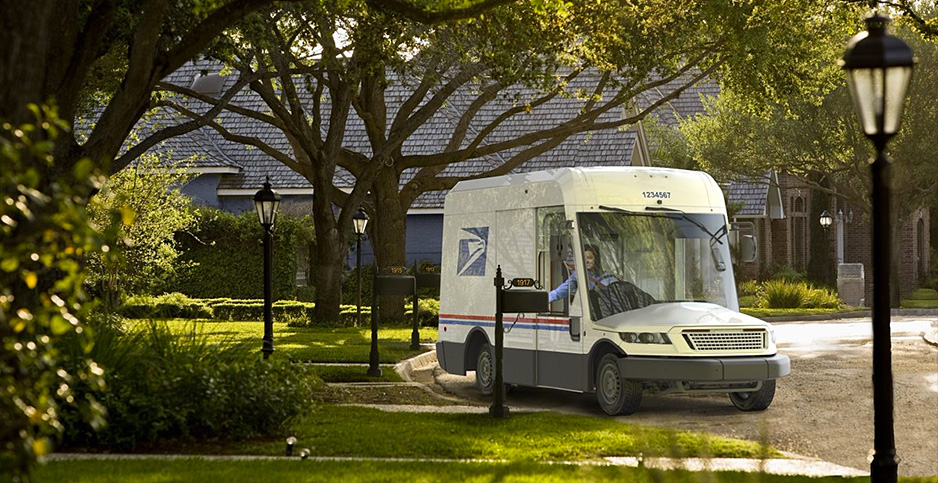 The U.S. Postal Service said yesterday that it would replace its aging fleet of trucks using a contractor focused first on vehicles that run on fossil fuels. USPS

The U.S. Postal Service yesterday made a $482 million decision to replace its aging truck fleet with a mix of fossil-fuel and electric vehicles, falling short of President Biden’s goal of electrifying the federal vehicle fleet.

The contract, six years in the making, went to Oshkosh Defense LLC, a Wisconsin firm that primarily makes military vehicles.

The new truck "will be equipped with either fuel-efficient internal combustion engines or battery electric powertrains and can be retrofitted to keep pace with advances in electric vehicle technologies," according to a USPS press release.

The award bypassed two other suitors that had proposed hybrid gas-electric and pure battery-electric vehicles.

USPS’s plan for what it called the "Next Generation Delivery Vehicle" raised the hackles of EV advocates, including the Zero Emission Transportation Association, an industry trade group that counts major electric utilities, charging providers and new EV makers among its members.

"U.S. Postmaster General Louis DeJoy is trying to lock our postal vehicle fleet into decades of carbon-intensive transportation," ZETA said in a statement. "This directly conflicts with the Administration’s stated goals and is certain to see swift pushback from appropriators who have sought to drive USPS vehicle electrification."

But USPS, as a semi-independent federal agency, is not under Biden’s direct control.

USPS is under pressure to replace its aging vehicle fleet. Almost two-thirds of its 225,000 vehicles are Grumman trucks that have been running routes since 1994 or earlier. Maintenance costs are high, and the rides have earned bad publicity as a disturbing number have caught fire, as the Postal Times online newsletter has reported.

The new vehicles, with right-side seats suited for reaching into mailboxes, will be a significant improvement over the old Postal Service mainstay, which had no air conditioning or air bags. They will also be equipped with cameras and anti-collision technology.

Oshkosh Defense is tasked with engineering the vehicle and preparing factories to make it. It is due to build 50,000 to 165,000 of the vehicles in the next decade. The first are supposed to enter service in 2023.

Neither USPS nor Oshkosh made clear what mixture of fossil and electric vehicles is planned.

Oshkosh beat out a combination of Karsan, a Turkish vehicle maker, and Morgan Olson, a manufacturer of aluminum vehicles based in Michigan, which had planned to make hybrid gas-electric vehicles, and Workhorse, an Ohio maker of electric trucks.

Jimmy O’Dea, a vehicles analyst at the Union of Concerned Scientists, said that the choice of Oshkosh is disappointing because last-mile delivery vehicles are one of the transportation sectors that are the most ready to be electrified (Energywire, Sept. 25, 2020).

For example, Ford Motor Co. said late last year that it would electrify its utility van, the Transit, and tech giant Amazon.com Inc. has placed an order for 100,000 delivery vans from new electric truck maker Rivian.

"I read it as [USPS] leaving the door open to advance the timeline on their terms, and to do combustion engines for an undefined length of time," O’Dea said.