‘Postcard from the future’: Hawaii solar fight could echo nationally 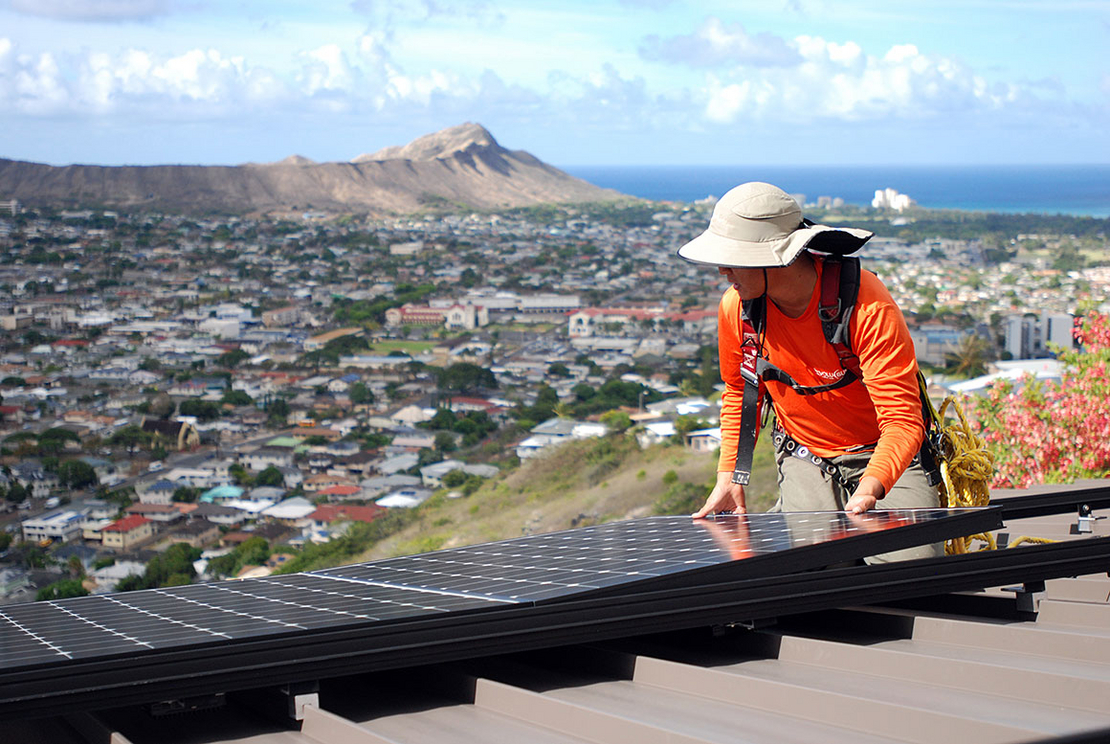 An installer for RevoluSun placing solar panels on a roof in Honolulu. Cathy Bussewitz/AP Photo

Hawaii regulators are considering competing proposals for valuing rooftop solar in a proceeding that could make or break the state’s clean energy goals and reverberate in the U.S. mainland.

Renewable energy groups, Hawaii’s largest utility and the state’s consumer advocacy office each submitted plans to the Hawaii Public Utilities Commission in May outlining how customers with rooftop solar arrays should be compensated for the power they produce. Solar boosters say the energy regulator’s decision could determine whether the island state hits its target of 100% renewable power by 2045.

Although Hawaii has an isolated grid, the debate in the state highlights challenges nationwide in integrating renewable energy resources into electric grids that were mostly built around large, centralized fossil fuel plants. It also showcases emerging equity concerns over clean energy policies once considered gold standards, such as net metering, in which utilities pay solar customers retail rates for power they send back to the grid.

“Plainly, Hawaii is the tip of the spear on a number of these issues, and the issues we debate in one year tend to pop up in other states two to three years later,” said Robert Harris, director of public policy at solar giant Sunrun Inc.’s Hawaii office.

Roughly 41 states have a version of net metering in place, according to the National Renewable Energy Laboratory. But as rooftop solar installations continue to grow, some states such as California are considering changes to net metering over concerns that it raises costs for customers without solar.

Since eliminating net metering in 2015, Hawaiian Electric Co. Inc. (HECO) — serving 95% of Hawaii power customers — has adopted interim policies that generally don’t incentivize customers to send excess electricity to the wider grid. Many solar customers have batteries installed so that they can store their unused power for themselves instead.

Now, the Aloha State is looking to develop a new, permanent program for customers with distributed energy resources such as solar and batteries. The hope is to find a solution that incentivizes rooftop solar, is fair to all customers and brings the state closer to its renewable energy goals, said Brian Lips, senior project manager for policy at the NC Clean Energy Technology Center at North Carolina State University. The Hawaii PUC is also considering proposals for “advanced” distributed energy resource programs, such as smart appliances that adjust their use depending on how much power is available on the grid.

“[HECO] is looking for a long-term solution, and one that can also enable further growth in renewables, but without having a negative impact on the grid,” Lips said.

Hawaii currently relies on expensive oil-burning power plants for about 80% of its power. Clean energy advocates point out that has led to Hawaiians paying more in electricity costs than any other state in the country.

Although customer-sited rooftop solar installations in Hawaii have roughly tripled since 2015, most customers don’t funnel electricity back to the grid because they’re not paid for it, said Harris, who is part of a coalition of clean energy groups that submitted one of the proposals with the PUC. If more solar customers were instead incentivized to export power, that would lower costs for everyone, since the collective power from rooftops could offset electricity consumption from oil power plants, he said.

It also might be Hawaii’s cheapest and most reliable option for reaching 100% clean power by 2045, advocates say. Oahu, the most populous island in Hawaii, lacks available space for large-scale renewable energy installations, and many residents don’t want to see huge swaths of pristine land on any of the other islands turned into solar or wind arrays. Proposals to build offshore wind are facing similar setbacks (Energywire, April 6).

“Hawaii plainly needs exports from [rooftop] systems. You can’t have customers solely focusing on self-generation — that will not achieve our 100% RPS,” Harris said, referring to the state’s renewable portfolio standard.

Meanwhile, Hawaii’s only coal plant is closing next year, and HECO and the PUC have warned that the shutdown could lead to a shortfall in power supply, said Isaac Moriwake, an attorney with Earthjustice.

“We’ve been undercompensating rooftop solar and demand-side solutions since the end of net metering, [and] it’s put us in a deeper hole now that we’re facing the closure of the coal plant,” he said.

To clean energy advocates on the mainland, Hawaii might seem like a solar paradise as much as it is a tropical one.

A hefty 17% of the state’s electricity comes from solar, according to the Solar Energy Industries Association. Most of that power originates from “small-scale, customer-sited” solar panel systems, the U.S. Energy Information Administration estimates. In Oahu, 36% of single-family homes have rooftop solar panels installed.

HECO, says it sees rooftop solar as central to the state’s decarbonization strategy, in contrast to many mainland utilities that tend to favor large, utility-scale solar installations. In a strategy released in May, HECO outlined its vision for a modern grid in Hawaii whereby half the state’s “required renewable resources” would come from distributed sources like rooftop solar.

“It is not one or the other for us, but ‘all of the above,’” HECO spokesman Peter Rosegg said in an email. “We need to maximize customer-sited resources like rooftop solar and batteries, electric vehicles and emerging electricity management technologies to decarbonize our energy systems by 2045.”

But solar advocates say current polices pose a major obstacle to a carbon-free power grid and equitable electricity rates. Existing rules are a missed opportunity, said Matthias Fripp, an associate professor of electrical engineering at the University of Hawaii. If solar customers had a financial incentive to install more panels than needed for their own homes, the excess generation could spread the benefits of solar to customers without it and reduce dependence on fossil fuels, he said.

“You could take power from customers with extra roof space and give it to customers who don’t have them,” Fripp said. “If we don’t do that, we’ll be using more open land for this [transition] than we need to.”

Clean energy advocates, however, say HECO’s proposal to the PUC is a far cry from that vision.

In May, the utility proposed two new programs in its rate design plan for customers with distributed energy resources. One includes a framework for compensating rooftop solar customers for power they export to the grid, with rates varying by the time of day.

The second program features an option for utilities to control customers’ distributed energy resources to serve the needs of the grid. HECO also proposed a so-called rooftop rental program, whereby customers who allow the utility to install a solar or battery system on their roof would receive a bill credit.

But the plan also includes new fixed charges that would make solar less appealing, said Jim Lazar, a retired senior adviser at the Regulatory Assistance Project who is supporting the coalition of clean energy groups on their proposal. For example, solar customers participating in any of the new tariff programs would be subject to a new, $40-a-month minimum charge.

“[The plan] would be brutal to apartment dwellers, brutal to single-family homes and brutal to solar customers,” Lazar said. “The people who would benefit are people who live in big houses, have swimming pools and air conditioners, run them all the time, and don’t have solar.”

Rosegg countered that the plan would reduce the risk of low- and moderate-income customers “subsidizing other customers who have greater access to energy options” such as rooftop solar.

Hawaii’s rooftop solar debate could be a litmus test for how to build renewables in an equitable way. Although rooftop solar adoption rates are high among homeowners in the Aloha State, apartment-dwellers make up a large portion of the state’s population and aren’t generally able to benefit from rooftop installations, observers said.

Net metering is sometimes seen as an unfair policy to nonsolar customers. Those who can afford it install solar panels and save money on their power bills, while the rest make up for the difference, the argument goes. But even with net metering gone in Hawaii, there is still a gap between how much nonsolar and solar customers pay for electricity, said Michael Roberts, a professor of economics at the University of Hawai’i at Mānoa.

Solar customers in the state receive federal and state tax credits for adding panels and batteries, as well as “implicit” subsidies on their bills, according to Roberts. In other words, although most solar customers don’t get credits from the utility for exporting power to the grid, they still enjoy bill savings that are subsidized by other ratepayers, Roberts said.

“The problem is getting the rate design set up in a way that’s not just incredibly unfair — so you’re not giving tons of money to wealthy people with rooftop solar and houses, but still encouraging them to install and overinstall to provide the rest of the grid with power,” he said.

Affordability and equity are central parts of HECO’s proposed rate design, Rosegg said. For example, by setting electricity rates by the time of day, HECO aims to encourage conservation when demand is high while also giving all customers — with or without solar — an avenue for lowering their bills.

“We have a disproportionate number of renters and apartment dwellers (especially on Oahu) who have been left out of the rooftop solar movement,” he said. “We are encouraging social-service and faith-based nonprofits to be shared solar subscriber organizations (recruiting their members as participants) and to be ‘anchor tenants’ on shared solar projects so they can use their electric bill savings for their mission of helping people.”

Still, observers said that rhetoric of equity has yet to translate on the ground. HECO’s community-based renewable energy program, for example, has been slow to start because of delays and uncertainty for developers and lack of awareness among customers, said Samantha Ruiz, director of regulatory affairs at the Ulupono Initiative and a former energy analyst at the Hawaii PUC.

“I think there’s a gap in the strategy to what’s happening on the ground,” Ruiz said, adding that HECO’s vision statements are nonetheless encouraging.

Clean energy advocates say their proposal to the PUC addresses some of the equity challenges with rooftop solar. Under their plan, customers with solar and storage systems would be incentivized to “backfeed” power to the grid during peak hours, said Lazar, the longtime energy adviser. That could avert the need to build new grid-scale batteries, which would be costly for HECO and ratepayers, he said.

Despite the ongoing disputes over solar in Hawaii, observers are hopeful that the final rate design that comes out of the PUC proceeding will be a model for other states that move beyond net metering but still want to maximize rooftop solar use. While Hawaii has more rooftop solar per capita than any other state, California and Arizona could soon reach similar levels, said Lazar, who described the Aloha State as a “postcard from the future.”

“The simple solutions aren’t always the best solutions,” said Fripp of the University of Hawaii. “Net metering at standard retail prices is simple, but it’s not sustainable economically. We’re trying to get to something better, but we still have a lot of work to do.”

Clarification: This article has been updated to reflect that the Ulupono Initiative is not a nonprofit. It awards some nonprofit grants.