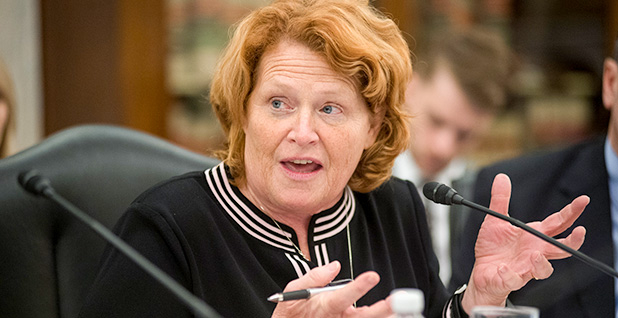 North Dakota Democratic Sen. Heidi Heitkamp is scheduled to meet with President-elect Donald Trump tomorrow, a signal that she may be in the running for a top administration post.

Putting Heitkamp in his Cabinet or in another top executive branch gig would bolster Trump’s bipartisan credentials while boosting Senate Republicans’ chances of keeping or increasing their majority in 2018.

The moderate Democrat is up for re-election in 2018, and her seat in heavily Republican North Dakota is seen as a vulnerable one for Democrats. If she leaves the Senate before her term expires, a new North Dakota law would require a special election within 95 days to fill the vacancy.

It’s unclear which post, if any, Heitkamp could be in the running for in a Trump administration. Her Senate assignments include posts on the Agriculture, Nutrition and Forestry Committee and the Homeland Security and Governmental Affairs Committee.

She has advocated an "all of the above" energy strategy and called for "finding a path forward for coal and coal-fired power."

She has also been a staunch critic of some Obama administration environmental policies, including the administration’s signature climate change rule to cut power plants’ greenhouse gas emissions.

Last year, Heitkamp was a co-author in the Senate of a resolution of disapproval aimed at repealing U.S. EPA’s Clean Power Plan.

Names haven’t been announced yet for top environmental and energy slots in the Trump administration, including Interior, Energy and Agriculture secretaries and EPA administrator.

Trump transition spokesman Jason Miller today would not detail which jobs Heitkamp might be in the running for.

He said of Heitkamp, "She comes very highly recommended, very highly qualified, is a proven leader and would be an asset in any role or capacity."

Heitkamp said today in a statement, "I appreciate the president-elect inviting me for a meeting."

She added, "Every single day, my work is motivated first and foremost by how I can be most helpful to the people of North Dakota. They are my driving force and have been throughout my career in public service. Whatever job I do, I hope to work with the president-elect and all of my colleagues in Congress on both sides of the aisle to best support my state."

The transition team has said no further Cabinet appointments are expected this week.