Powelson upends FERC with his departure 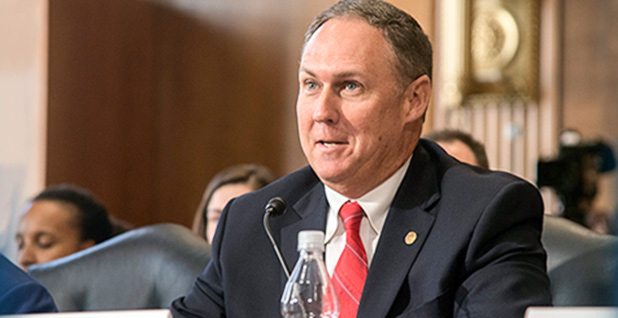 Robert Powelson’s departure from the Federal Energy Regulatory Commission leaves the agency without its most experienced hand on state regulatory affairs at a time when turbulent policy debates about electric grid reliability and the impact of natural gas pipelines and their emissions are ripening.

Powelson’s departure will leave FERC with a split commission, two Republicans and two Democrats, until a replacement is nominated by President Trump and confirmed by the Senate.

Powelson, a Republican, announced yesterday afternoon on Twitter that he is leaving to become the president and CEO of the National Association of Water Companies, the lobby for the nation’s private water utilities. He will leave FERC in mid-August.

"It is with mixed emotions that I issue the following statement. It has been an honor to serve this great country. My family and I are deeply appreciative of this opportunity. FERC is a world class organization. Thanks to you, fellow FERCians!" he wrote.

"Sad to hear this news. You will be missed. That’s one lucky trade assn," said Commissioner Cheryl LaFleur
on Twitter.

As the only former state regulator on the commission, Powelson was a passionate defender of states’ rights and of the success of regional power markets.

Since joining FERC in August of 2017, Powelson has been a vocal opponent of Trump administration plans to secure financial support for struggling coal and nuclear plants.

His declaration that he didn’t join FERC to "blow up the markets" was oft-repeated when the Department of Energy sought to direct FERC to change market rules to compensate those plants last year.

And as recently as this week, he echoed those sentiments, advising DOE against targeting one region of the country as the Trump administration again looks for ways to boost struggling power plants (E&E News PM, June 27).

FERC observers will be looking for whom Trump nominates as a replacement and whether that person agrees with the administration’s approach to regulating power markets. A new commissioner could shift the dynamic, leaving FERC’s two Democrats, LaFleur and Richard Glick, to rebuff administration efforts to subsidize money-losing coal and nuclear plants.

Before joining FERC, Powelson was a member of the Pennsylvania Public Utilities Commission, where he was chairman for more than four years. He was also president of the National Association of Regulatory Utility Commissioners.

AT NARUC, he served as chairman of the Committee on Water and represented the water committee on NARUC’s Task Force on Climate Policy.

While FERC decisions are often unanimous, the vacancy also could have implications for natural gas pipeline applications. Democrats LaFleur and Glick have dissented on several recent commission decisions, arguing against the Republican majority’s move to limit greenhouse gas considerations.