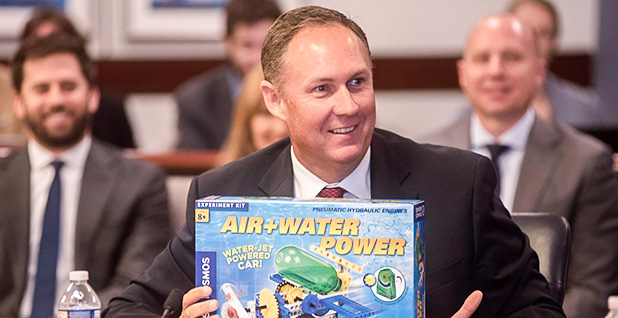 "My leaving early does not create a quorum problem, so let’s put that off the table. You can still get to three [votes] because you have four people," he said in an interview.

"So it’s very incumbent upon [them] allowing the record to be developed," he said. And having just four members may lead to "greater horse trading," he added.

As to the 3-2 votes, Powelson said it’s "nice to have 5-0 votes, but this isn’t Utopia here. There’s people who have widely held beliefs and defend the righteousness of their position. But at the end of the day, I think the demonstration of collegiality of the commission and the independence of it remains intact. So 3-2 votes? That’s democracy."

"I don’t make any decision based on the fact that I’m a lifelong Republican. I have a mean independent streak in me," Powelson said.

He leaves FERC just shy of one year’s service, the shortest tenure of any commissioner in the agency’s history.

He was the only member of the commission who had served as a state regulator, and that is why he thinks the White House should replace him with someone who shares a similar background as a state regulator. "I still have that states’ rights DNA in me," he said in an earlier interview.

At its recent summer meeting, NARUC passed a resolution urging the administration to fill Powelson’s seat with someone with experience as a state regulator.

"I just will tell you that it’s critically important that whoever replaces me understands the mission of the FERC. You’re not here to do politics. You’re here to be an independent thought leader. You want to work well with your colleagues to get things done. You need to stand for something; you can’t be a wet noodle," Powelson said.

McNamee, a Trump political appointee, has since June been executive director of the Department of Energy’s Office of Policy.