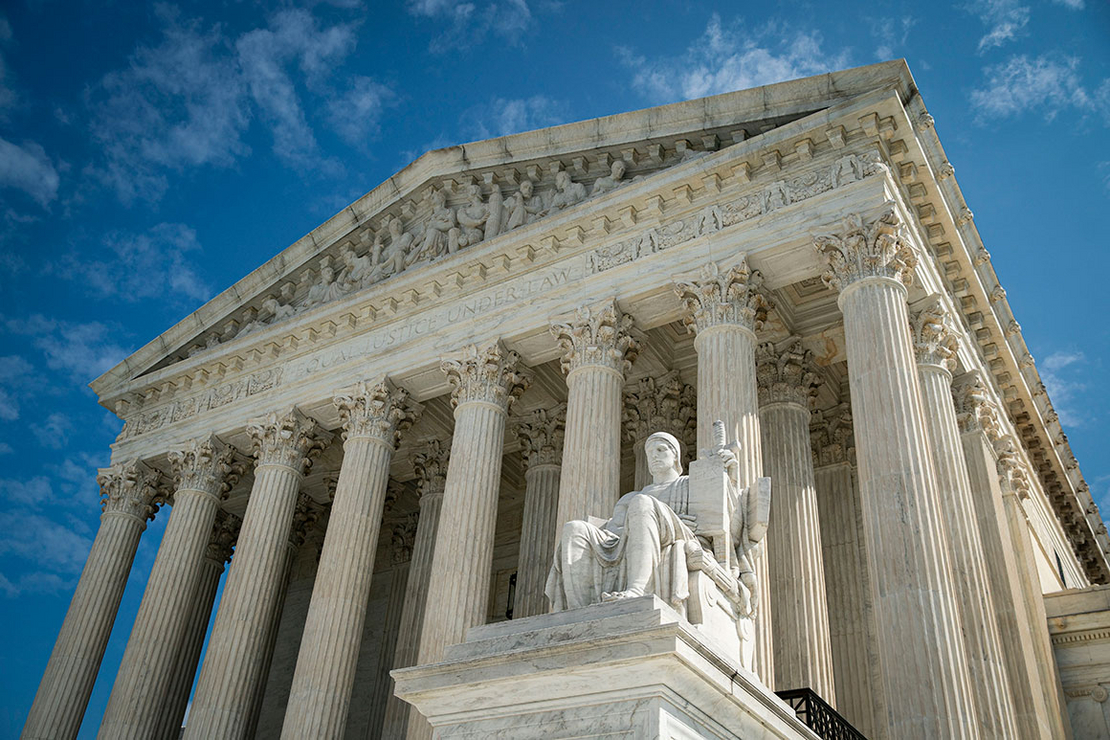 The Supreme Court is pictured in 2020 in Washington. Al Drago/Getty Images

Public and private power companies yesterday called for the Supreme Court to uphold EPA’s authority to broadly regulate how they produce electricity for the nation.

Consolidated Edison Inc., Exelon Corp., National Grid USA and other firms expressed their support for EPA to require the sector to cut emissions using a range of approaches that look beyond technical controls at individual facilities.

"Power companies, including the Power Company Respondents, favor emission-reduction approaches that allow for trading because these market-driven approaches enable the greatest emission reduction at the lowest cost," the companies wrote in a brief docketed yesterday in the case West Virginia v. EPA.

The companies — which provide power to about 40 million Americans — had opposed Supreme Court review of the challenge launched by coal companies and Republican-led states that asked the justices to limit EPA’s options to regulate emissions under the Clean Air Act.

In a stunning move, the court last year agreed to take up the case, which focuses on a federal rule that does not currently exist.

The landmark case, set for arguments on Feb. 28, could impede the Biden administration’s efforts to decarbonize the power sector and handcuff federal agencies’ authority to issue broad regulations (Energywire, Nov. 1, 2021).

Red states and coal companies have argued that the "best system of emission reduction" for existing sources should be read much more narrowly than the approach the U.S. Court of Appeals for the District of Columbia Circuit upheld last year when it struck down a Trump-era rule that had gutted the Obama administration’s Clean Power Plan.

Instead of allowing approaches like generation shifting from coal to renewable sources, the Republican states and coal firms argue, EPA should be restricted to emissions reductions at the facility level, or "inside the fenceline."

While the challengers’ arguments center on a regulatory approach adopted by the Obama team in the Clean Power Plan, the power companies pointed out in their brief yesterday that the 2015 rule had never gone into effect and that the Biden administration does not plan to revive it.

Biden’s EPA has said it plans to issue a proposed carbon rule this summer, which is around the same time the Supreme Court is expected to hand down its ruling in West Virginia v. EPA.

"The Power Company Respondents urge the Court to reject Petitioners’ request that the Court issue an advisory opinion about whether speculative abuses of power by an imagined future EPA Administrator would fall within the powers Congress lawfully granted to the agency," the companies wrote.

They added that the court should reject arguments from West Virginia and the other challengers that EPA’s regulatory approach raised concerns about whether courts should defer to agency discretion for rules with "vast economic and political significance."

The Clean Air Act expressly authorizes EPA to set the best system of emission reduction, which states use to create individual standards of performance for existing sources, the power companies said.

"And States retain broad authority and flexibility under [Clean Air Act] Section 7411(d) to regulate existing sources by establishing and enforcing the standards of performance, leaving the agency no room beyond what Congress explicitly authorized," they wrote.

In its own response to the petition, EPA challenged the argument that a systemic approach to emissions regulation that would include options like trading or efficiency improvements would prove to be overly burdensome to states.

"But contrary to petitioners’ suggestion, those measures need not be utilized by all sources equally," the agency said.

"The [best system of emission reduction] may reflect the agency’s determination that overall emissions can best be reduced by taking account of the ways in which different sources are differently situated," the brief continued.

In practice, that could mean that one source may comply with the rule by reducing emissions, while another would purchase allowances, EPA wrote.

"The ‘system’ is still being applied to both, and the ‘best system’ is the one that best reduces the aggregate emissions," the agency concluded.

Other supporters of broad EPA authority weighed in on the fight.

New York led an amicus brief with other Democratic-led states and municipalities, which argued that Congress had clearly tasked EPA with regulating carbon emissions from existing power plants in partnership with states.

"There is also no dispute that EPA has experience and expertise in studying the harms of greenhouse-gas pollution and evaluating the best means of reducing that pollution from stationary sources," they wrote.

Some of the challengers in the case also incorrectly assume that Congress did not intend for EPA to craft rules that would have a significant impact on energy generation, the blue states wrote.

"To the contrary, because the power sector is well understood to play a significant role in creating pollution, Congress was fully aware that EPA would have to take energy into account in designing its emission regulations," they continued.

They pointed to requirements under part of the Clean Air Act that EPA consider "energy requirements in determining what approach qualifies as the best system of emission reduction."

‘No case or controversy’

Alongside renewable power trade groups like the Solar Energy Industries Association, health and environmental advocates said it was too early to take up the matter because President Biden’s EPA has yet to write a new carbon rule.

There is "no serious possibility" that the Clean Power Plan would be revived, they said in their brief. Even if it did, they added, “market-driven trends in the electric power sector have rendered its emission reduction targets immaterial.”

Waiting for a new rule would “both define the issues for judicial review and avoid entangling the court in an unnecessary advisory exercise over an abstract and technical policy dispute,” the groups wrote in their brief. “In the absence of any extant regulation (or evidence of a concrete injury), there is no case or controversy for this court to adjudicate.”

The groups also argued that EPA is within its congressional mandate to regulate greenhouse gas emissions, saying that the authors of the Clean Air Act “were aware of — and concerned about — the potential for air pollution to cause climate change.”

They said the statute has “saved hundreds of thousands of lives every year, while the U.S. economy nearly tripled in value” over the Clean Air Act’s 50-year history.