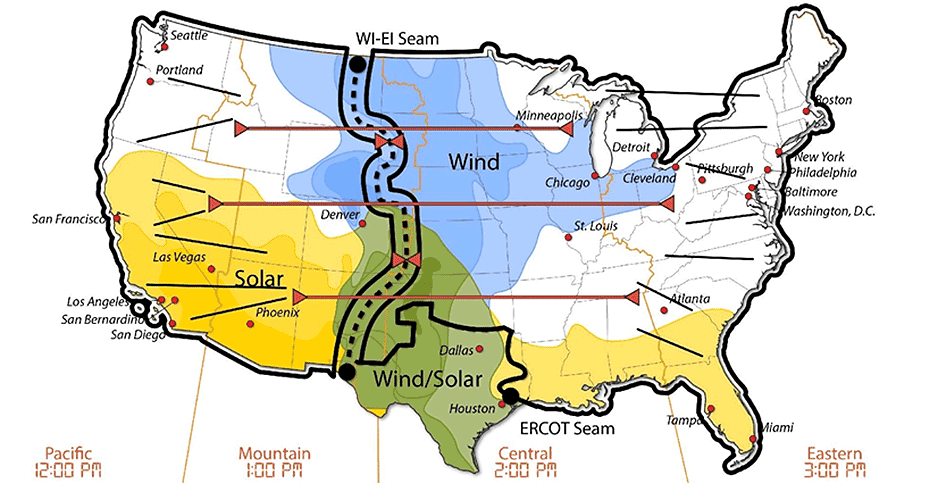 If the goals of the "Green New Deal" are a political minefield, so, too, are the most likely strategies for reaching its target of very high national levels of renewable energy output.

A shelf of authoritative studies under the Department of Energy’s sponsorship dating back to George W. Bush’s presidency define how to take a big step in that direction. Their answer — build a network of long-distance, ultra-high-voltage transmission lines to widely share wind and solar power across the continent’s time zones.

But the strategy has faced overpowering headwinds of not-in-my-backyard opposition from residents and not-through-my-state political pushback. It’s also been rare for Congress to put aside partisan politics and pass major legislation facilitating transmission corridors.

"If you’re going to do a 100 percent clean energy portfolio — that is really 70 to 80 percent of electric power from renewables — I don’t know how you avoid huge transmission builds," said Richard Sedano, president of the Regulatory Assistance Project, a nonprofit, nonpartisan think tank advocating a clean energy future. "It’s either that or overbuilding the system so much with surplus renewables and batteries" that consumers will be hammered.

"I don’t see how you have a national clean energy standard without significant federally mandated or incented transmission build cutting across regions of the country," added Travis Kavulla, a former Montana utility commissioner and president of the National Association of Regulatory Utility Commissioners, now with the R Street Institute in Washington, D.C.

DOE’s National Renewable Energy Laboratory (NREL) issued the Eastern Wind Integration and Transmission Study in 2010, with strategies to provide 20 percent of the electricity supply east of the Rocky Mountains from wind energy by 2024. It counseled: "The integration of 20 percent wind energy is technically feasible, but will require significant expansion of the transmission infrastructure and system operational changes."

The most detailed of the analyses is NREL’s ongoing Interconnections Seam Study based on massive computer simulations of power flows. It outlined one scenario with three ultra-high-voltage direct-current lines spanning the Rocky Mountains to the Mississippi River, with other new lines moving western power eastward.

Because grid operators can control the direction of power flows on direct-current lines, surplus afternoon solar power from the Southwest could stream into Southeastern states at dusk. Other lines could ship unused wind energy from the Great Plains into major cities in the Great Lakes and East Coast regions, or the other way into California.

By linking time zones, the variability of wind and solar power at different times of day becomes a strength, not a weakness, explained project leader Aaron Bloom.

The scenario would require an estimated $70 billion for new power lines and nearly $700 billion for new power plants through 2038. A carbon tax on power plant CO2 emissions would add $163 billion in costs. But considering savings on fuel and operations as wind and solar expand, overall benefits are three times greater than the costs, NREL estimated.

An even more ambitious national grid has been proposed by Alexander "Sandy" MacDonald, former director of NOAA’s Earth System Research Laboratory. MacDonald led a team that analyzed 50 billion pieces of weather data from across the country to demonstrate the value of a transmission "supergrid" built along interstate highways to move surplus wind and solar into distant urban centers.

The completed network would provide 38 percent of the nation’s electricity output from wind and 17 percent from solar.

"Doing a robust electrical system isn’t going to break us. It might raise the average electricity cost in the U.S. from 10 cents [per kilowatt-hour] to 11.5 cents and create 6 million permanent jobs," MacDonald said (Energywire, Dec. 19, 2017).

Clues from past fights

Outside these transmission studies is the reality of how Texas became the nation’s biggest producer of wind power.

Transmission was a key factor in the addition of more than 20,000 megawatts of wind generation capacity in the Electric Reliability Council of Texas area, covering 90 percent of the state’s households. Texas officials approved a plan in 2006 to build 2,400 miles of power lines to deliver wind generation to the state’s population centers. That new grid is also delivering a growing output of solar power, an unexpected benefit, says Americans for a Clean Energy Grid.

But Texas’ leap to wind power rested on a bipartisan political marriage of legislators. On one side were rural Texans in the wind-rich, thinly populated Panhandle region who were eager to earn royalties from wind farm developers. On the other were clean energy lawmakers representing metropolitan areas.

A consensus like that happened only once on the national level, when a Republican-controlled Congress passed the 2005 Energy Policy Act in reaction to the stunning Aug. 14, 2003, power failure that knocked out power to 50 million people between New York and Detroit.

The act was hailed as a monumental legislative undertaking, taking 213 recorded votes in the Senate and 373 in the House before the final compromise was hammered out and signed by Bush. It was supported by 90 percent of the House Republicans and 20 percent of the Democrats. It was saluted by supporters as the first comprehensive energy bill in 10 years — and that was more than 13 years ago.

The law set up a two-part process. First, the Energy Department would identify "National Interest Electric Transmission Corridors" where electric supply was threatened by overcrowded transmission lines. Congress also authorized the Federal Energy Regulatory Commission to step in and approve rights of way for newly proposed power lines within a corridor if a state government along the route withheld approval of a project for more than one year.

DOE drew two corridors running through the Mid-Atlantic and Southwestern states, prompting environmental lawsuits and protests that building more high-voltage lines would actually help coal-fired generation expand. Opponents said FERC’s ability to intervene disappeared if a state rejected — not delayed — a project within the one-year time frame, and the 4th U.S. Circuit Court of Appeals agreed in 2009 by a 2-to-1 vote.

Then DOE’s corridor designations were invalidated by the 9th U.S. Circuit Court of Appeals in 2011. By that time, a strong lobby was at work in Congress arguing for states’ rights and pushing to block any new move for national transmission projects.

"If there is a national clean energy standard, that is necessarily a usurpation over state prerogatives of state resource mix," Kavulla said in an interview.

New York provides an example of a state that is pinning its future on new wind and solar energy without a comparable commitment to moving the power, some analysts say.

In fiscal 2018, the New York State Energy Research and Development Authority pledged $360 million to attract $1 billion in private investment to fund 11 large-scale renewable energy projects in the state. By 2020, the energy authority expects to be funding 35 additional renewable projects. The state’s plans include 800 MW of offshore wind.

The state has three transmission projects in the works to move renewable power from the Niagara Falls region to Albany and down to New York City. But the only mention of new projects in the 2019 budget of Gov. Andrew Cuomo (D) is a promise to transform the state’s transmission grid "to a distributed smart grid network."

The Cuomo plan proposes to help keep power flowing when the sun is down and the wind is still by developing 1,500 MW of energy storage by 2025, a similar vision of how "Green New Deal" advocates look to battery backup for renewables.

Former Energy Secretary Ernest Moniz issued a report with energy historian Daniel Yergin this month arguing that the next round of large wind and solar power production over the next two decades requires more production of natural gas to fill in when those resources aren’t available. Batteries don’t have the capacity to do that in all circumstances, Moniz said in an interview.

"When we talk about [battery] storage, what we see being deployed today is generally storage for two, four, maybe six hours max. That’s very important for handling the daily variations you have in solar and wind. But what about the week when the wind doesn’t blow, for example, or in some cases the month?"

Raising renewable energy output over the next several decades will rest on current technologies, Moniz said. To go even further after that, carbon emissions from gas plants must eventually be captured, stored underground or absorbed in new chemical processes that haven’t been invented yet, he added.

Releases and leaks of methane, the primary component of natural gas and a potent global warming agent, also must be controlled, Resources for the Future warns (Energywire, Feb. 8).

Simon Moores, managing director of Benchmark Mineral Intelligence, told the committee earlier this month that expected global increases in battery use will require an eightfold increase in lithium production worldwide and steep gains in output of cobalt, graphite and nickel. The United States imports 100 percent of its cobalt and 92 percent of its current lithium requirements, Moores said.

Researchers all over the country are striving to create technologies for better-performing, cheaper batteries with less vulnerable materials, but the chances for success are big question marks.

The "how to do it" political challenge for the "Green New Deal" is compounded by the most profound operating changes in the U.S. electric power sector since the era of Thomas Edison.

Jeffrey Taft, chief architect for grid transformation at the Pacific Northwest National Laboratory, has pointed out that the flow of electricity across the power grid and into Americans’ homes and offices is getting inexorably faster and more complicated as rooftop "distributed" solar energy expands and "smart" appliances proliferate and alter supply and demand for power at minute levels.

"A future with potentially 30 per cent of the U.S. installed resource capacity coming from distributed resources and customer participation requires a different physical distribution system than exists today," Taft wrote in 2016.

Most of the current operators of the complex U.S. power networks grew up in a familiar system where operators had windows of five minutes or longer to react to a sudden outage on a big power line or an unexpected nuclear plant scram.

To manage the much more complex power flows of the future, with increasing amounts of fluctuating wind and solar power, computers must react to changes in grid conditions 30 to 60 times a second in some cases, much too fast for humans, Taft wrote.

Even a 30 percent renewable power output throughout the synchronized eastern grid would require instantaneous management of power flows from Montreal to Miami and as far west as New Mexico, DOE experts have noted.

Where will the investment come from?

Some "Green New Deal" advocates say the federal government must take the lead, as it did in fighting unemployment in the Great Depression and Germany and Japan in World War II.

Moniz argues that the formula for success in transforming the grid has to recognize the unique, essential roles that utilities and private-sector investors will play in remaking a power grid with thousands of utilities and multiple thousands of power plants and miles of power lines.

Putting the nation’s innovation machine into overdrive in this cause requires both existing power companies and upstart inventors, he said.

"The large incumbents, that’s where the customer bases are, where the supply chains have been built. They understand their public good responsibilities — things like universal service," Moniz said. They live with regulations created to protect the public interest.

"Disrupters come in with very, very different business models, but they are going to have to fit into that system of reliable service, as well," he said.

Sedano, a veteran former utility regulator, said: "’Social license’ is a term we sometimes use when we’re trying to sound very intelligent. It means whether the public is behind the government in what it is trying to do.

"We haven’t even tried to get that from the public" in the debate over the climate threat, he said.

"So with the question of whether it’s possible, of course it is," he said. "Is it likely? That’s a better question."