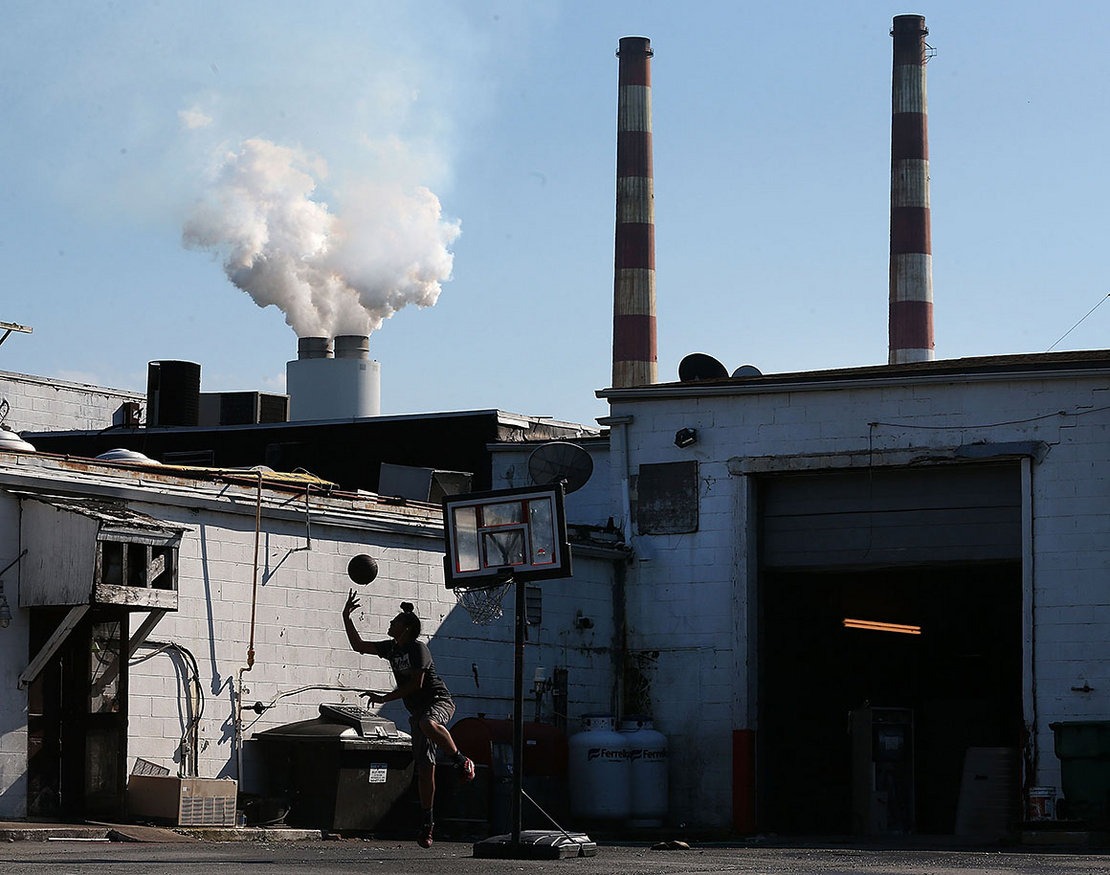 A draft EPA rule on power plant emissions offers clues on how the agency will address environmental justice concerns. Pictured is Hasanjit Mundi playing basketball behind a truck stop restaurant as emissions spew out of a large stack at the coal-fired Morgantown Generating Station on June 29, 2015, in Newburg, Md. Mark Wilson/Getty Images

In its opening bid to reverse a Trump-era rollback last week, EPA sought to rebuild the legal foundation for power plant emission regulations put in place a decade ago.

Embedded in the rule are also clues about how the agency might justify future steps to reduce the disproportionate impact of toxic air pollution on low-income communities and people of color.

In a draft rule, EPA officially conceded for the first time that its original compliance price tag forecast for the Mercury and Air Toxics Standards was likely far too high. But the agency adamantly maintained that it’s not necessary to translate all of the projected gains from less disease and death into dollars-and-cents terms, thereby laying out the groundwork for achieving environmental justice goals.

Even when information is lacking to “monetize” the benefits of expected pollution cuts, “we think it is appropriate to give substantial weight to those public health impacts,” says the draft. That statement can be read as a rebuke to the Trump administration’s stance, which sought to subject all major proposed Clean Air Act rules to cost-benefit analyses.

It is “a significant signal for future regulations that EPA is going to consider nonquantifiable benefits more heavily than they have in the past,” David Loring, an environmental attorney with Schiff Hardin LLP who represents utilities, said in an interview.

If the exact implications of any such shift have yet to play out, Loring foresaw EPA taking a similar stance with other rules. More broadly, he added, it could undergird the rationale for factoring in “environmental justice concerns” that have been a Biden administration hallmark.

Agreeing was Mary Evans, a public policy professor at the University of Texas, Austin. Under an approach that is supposed to account for the “totality of the circumstances,” EPA “is going to put environmental justice analysis on a different ground than it’s been on,” Evans said in an interview and follow-up email exchange. The reason: A cost-benefit test may not do much good in determining whether a specific regulation will lead to a more equal distribution of pollution exposure or instead exacerbate existing differences.

“My sense is that the totality of the circumstances’ approach is an effort to understand answers to some of these broader questions,” Evans said.

The draft rule, for example, highlights evidence that Black women in the South who rely on subsistence fishing for food may be significantly more at risk from exposure to the organic form of mercury known as methylmercury than the general population.

“We think these results are relevant in considering the benefits of regulating” power plant releases of hazardous air pollutants, the draft says.

“Both of those are much needed reforms that improve the policy analysis process at EPA,” he said.

The proposal revives the “appropriate and necessary” legal basis for regulating emissions of mercury, formaldehyde and other air toxics from coal-and oil-fired power plants (E&E News PM, Jan. 31). Former President Trump’s EPA scrapped the finding two years ago (Greenwire, April 17, 2020). Now, the Biden administration says the Trump approach flops “because it gave little or no weight to the statutory concern … to protect even the most exposed and most vulnerable members of the public.”

Originally, expected annual compliance costs were expected to be as high at $9.6 billion, a sum that critics repeatedly juxtaposed against estimates of resulting “direct” health benefits of only a few million dollars.

But the actual expense to the power industry “was almost certainly” billions of dollars less than projected, the agency now says, echoing what private observers have asserted for years. While EPA does not try to reckon precisely what MATS actually cost, the draft says that just one portion in the original forecast — that dealing with the projected installation of pollution controls — may have been as much as $4.4 billion too high.

The lower than expected price tag, however, “further supports the determination that regulation is appropriate and necessary after considering cost,” according to the draft. Although touting additional research in the last decade underscoring the public health benefits of cutting hazardous power plant emissions, it does not seek to update the relatively minuscule dollar amount of those gains directly attributable to MATS.

But while EPA routinely suggests that the standards were key in driving huge reductions in coal-fired power plant pollution, the draft cites research indicating that an unanticipated plunge in natural gas prices was more important in weaning utilities off coal. One study, for example, attributes 92 percent of the drop in coal production between 2008 and 2016 to cheaper gas, with MATS and other air regulations accounting for about 6 percent.

Particularly in its organic form, mercury is a neurotoxin dangerous to fetuses and babies’ brain development. Initially, however, almost all of the estimated health gains of at least $37 billion under one scenario were pinned on the “co-benefits” of accompanying cuts in soot-forming pollutants that were not directly targeted by the standards. The lopsided gap between the direct benefits and the compliance costs quickly became a rallying cry for critics of the standards who sued to stop them from taking effect.

“Fairly dramatic” was Supreme Court Chief Justice John Roberts’ description of the gap during 2015 oral arguments on legal challenges to the standards (Greenwire, Nov. 10, 2021). In a 5-4 opinion issued a few months later, the high court kept the emission limits in place, but concluded that EPA should have considered the expense to industry when making the appropriate and necessary determination. In a 2016 response, EPA officials concluded that cost considerations would have made no difference. That response, known as a “supplemental finding,” is itself the target of industry lawsuits that have now been in limbo for almost five years after the U.S. Court of Appeals for the District of Columbia Circuit agreed to put proceedings on hold (Greenwire, April 28, 2017).

But in 2020, the Trump administration cited the gap in opting to scrap the supplemental finding and, with it, the determination that regulation of power plant toxics had been adequately justified in the first place. When published in the Federal Register, the newly proposed rule will carry a 60-day deadline for written public comments; a virtual public hearing is also planned.

In an overviewissued late last year by Harvard University, researchers concluded that “the value of reducing emissions is orders of magnitude higher than EPA’s initial effort at monetization for the 2011 rulemaking.”

Because virtually all remaining coal-fired plants were in compliance by 2017, the reinstatement of the standards’ legal underpinning would have no immediate practical effect, although it could thwart a coal company’s lawsuit targeting the actual emission limits (Greenwire, Aug. 24, 2020). Utilities sided with environmental groups in opposing the Trump administration’s rollback for fear that it could undercut their ability to gain state regulators’ approval to charge back compliance costs to customers.

The two sides part company, however, on whether the existing standards need to be tightened. Following a statutorily required review, the Trump administration found that the status quo was adequate, a decision backed by power producers and opposed by environmental and public health advocates. Under the proposed rule, EPA will now take feedback on revisiting that decision.

On Capitol Hill, members of Congress who had once variously battled or championed the standards have mostly been mum since the proposed rule’s release. An exception was Senate Environment and Public Works Chair Tom Carper (D-Del.).

Despite MATS’ success in cutting power plant emissions, “the previous administration ignored science as it attempted to turn back the clock on these protections,” Carper said in a statement last week.

“Fortunately, we can now breathe a little easier knowing that EPA is sticking with what most of us know to be true — clean air is integral to healthy communities and a thriving economy.”