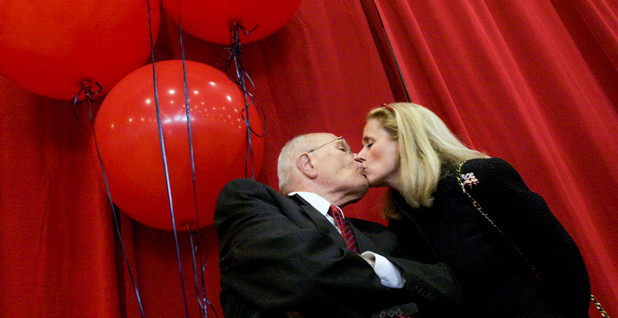 Debbie Dingell kisses her husband, then-Rep. John Dingell, at a 2005 celebration in Detroit to mark his 50th year in Congress. Debbie Dingell was elected last fall to succeed her husband; Dingells have represented the Detroit area in Congress since 1933. Photo by Madalyn Ruggiero, courtesy of AP Images.

On one side, the Democrat heaps praise on the legacy of her husband, former Rep. John Dingell (D), a conservationist who played a major role on several of the country’s bedrock environmental laws, including the Clean Air Act and National Environmental Policy Act, during his nearly 60 years in the House.

On the other, she emphasizes that the environment has played a defining role in her life from childhood, well before she met John. Debbie Dingell grew up in St. Clair, a small town in southeast Michigan along a river bearing the same name.

That water, she says, "was my life." In the summer, she would float down the river in an inner tube. In the winter, she’d skate on it.

"The water matters to me," she said during a recent interview. "If I could dream of one thing that I just wanted to do to feel carefree, it is to go back on that inner tube and float down that water."

Dingell was elected to her husband’s seat in 2014, becoming the first spouse to succeed a living husband in Congress. But she’s no political novice. Dingell has been a power broker in Michigan politics for years, previously considered a run for the Senate and has been mentioned as a potential candidate for governor in 2018.

She says her background — a childhood spent outdoors, decades as an auto industry executive and years in politics — makes her qualified to defend her husband’s legacy, which she says is "decidedly under attack" by the Republican-controlled Congress.

"I take the responsibility very seriously when all of the major laws of the ’60s have the Dingell name on it," she said.

Dingell’s congressional office has dark red walls and countless photos of her, John and presidents dating back four decades. Sitting on her coffee table are three Ford Mustang models in red, white and blue.

Her heavily Democratic district stretches from the Detroit suburbs west to Ann Arbor and is a hub of the American auto industry. It’s a good fit for a congresswoman who refers to herself as a "car girl."

Dingell, 61, grew up in a conservative family and is a descendant of the Fisher family of Fisher Body fame, one of the founding members of General Motors in the early 20th century. She worked as a lobbyist for the auto industry for years, eventually meeting her future husband on a flight. She later moved to GM’s philanthropic foundation after marrying John 34 years ago and stayed there until 2009.

Like her husband, who was known as a brazen, if at times brash, "Old Bull," Dingell has a direct manner. She is currently the ranking member on the House Natural Resources Subcommittee on Oversight and Investigations and has developed a reputation as a tough questioner willing to do her homework before hearings.

For example, while she praises the auto industry for technology advances that have increased fuel efficiency, she is also quick to criticize car companies for not speaking with a unified voice in response to the Obama administration’s more ambitious environmental goals.

"How’s that for bluntness?" she added.

Debbie is actually the third Dingell to serve in Congress.

John Dingell Sr. was a New Deal Democrat who represented western Detroit in the House for more than 20 years.

And he, too, played a role in environmental policy. In 1950, he sponsored legislation regulating the management and restoration of fisheries. Commonly referred to as the Dingell-Johnson Act, most attribute it to his son because many other pieces of environmental legislation bear John Jr.’s imprimatur.

John Sr. took his son fishing and hunting, and instilled in him an appreciation for the outdoors. When he died in 1955, John Jr. won a special election to succeed him.

Debbie, however, noted that John Jr. almost didn’t become a congressman. He had applied to be a national park ranger.

"If he had been accepted," she said, "he never would have run for office." (John’s full-time assignment to the Park Service came through shortly after he was elected to the House.)

John Jr. ascended the Democratic ranks in the 1960s and ’70s, establishing himself as one of the pre-eminent conservationists in the House, second only, perhaps, to Mo Udall of Arizona (E&E Daily, June 9). He began crafting environmental legislation from the now-defunct Merchant Marines and Fisheries Committee.

Debbie said that most people take those environmental protections for granted. But at the time, she said, John was "swimming upstream."

"He was condemned across the country for wanting to clean up the water," she said, noting that it took him a decade to pass many of the laws.

Mike Toohey was a Republican staffer on the Merchant Marines and Fisheries panel during that time and, later, on the House Transportation and Public Works Committee. He recalled that John Dingell mastered parliamentary rules, much more so than other members of Congress.

"He is an incredible legislator," Toohey, now the president of the Waterways Council Inc., an industry group. "Most members are kind of lazy and don’t learn the rules. Mr. Dingell not only knew the rules; he was a master at using them."

Toohey added that John was relentless in pursuing his goals.

"He delivered very controversial legislation by the strength of his personality," he said.

Dingell ascended to become chairman of the Energy and Commerce Committee, a post he held for more than 14 years and from which he wielded tremendous power. In 1990, Dingell played a major role in amending the Clean Air Act.

His tenure on the committee wasn’t without controversy, however. He was long criticized for his close relationship to the auto industry, with critics dubbing him "Tailpipe Johnny" for his resistance to stronger tailpipe air standards.

In 2002, the Sierra Club endorsed his Democratic primary opponent — then-Rep. Lynn Rivers, who had been drawn into the same district — out of frustration with Dingell’s reluctance to back greenhouse gas emissions limits.

And in 2008, he was ousted as committee chairman by then-Rep. Henry Waxman (D-Calif.) in an ugly intra-party standoff. Waxman, who was supported by then-House Speaker Nancy Pelosi (D-Calif.), and other Democrats expressed concern that Dingell could slow or block the incoming Obama administration’s more aggressive environmental agenda.

Nevertheless, Dingell, who is now 88 years old, earned the praise of environmentalists when he decided to retire in 2013. He has a lifetime score of 75 percent from the League of Conservation Voters, including a 93 percent mark in 2013.

Last year, the Michigan LCV gave Dingell a lifetime achievement award for his work on the Clean Air Act, the Clean Water Act, the Endangered Species Act, NEPA and establishing the country’s only international wildlife refuge in Detroit.

"He was a hell of a congressman," said Leon Billings, who was chief of staff for the late Sen. Edward Muskie (D-Maine) when the Clean Air Act was passed, "even though Muskie and me went toe-to-toe with him on several occasions. He was a powerful guy."

A future in statewide politics?

Jack Schmitt, deputy director of LCV’s Michigan chapter, said Dingell quickly reached out to the group when she began considering a run for John’s seat.

"She indicated pretty early that she was conscious of Congressman Dingell’s legacy on these issues," Schmitt said. "She said that was a legacy she wanted to continue."

Though it is early in Debbie Dingell’s legislative career, Schmidt said his group has been pleased. Dingell stood with the environmental community, he said, in opposing Republican efforts to force approval of TransCanada Corp.’s Keystone XL pipeline.

Thus far, Dingell has introduced legislation with Rep. Candice Miller (R-Mich.) to address invasive species in the Great Lakes. She has also sharply criticized a Republican bill that would exempt fishery management decisions from requiring a NEPA environmental analysis.

The invasive species bill, she said, is an example of working across the aisle.

"The American public is tired of partisan fighting," she said. "They want to see us come together and find solutions. I have deep respect for my friends on the other side of the aisle."

It remains to be seen, however, whether Dingell will have — or wants to have — the same impact in the House that her husband had. A longtime player in Michigan politics, Dingell considered running for the open Michigan Senate seat when then-Sen. Carl Levin (D) announced his retirement in 2013.

Bill Ballenger, the editor of Inside Michigan Politics, said Dingell has "been a major force in the Democratic Party."

He added that she seems reluctant to play up her work on environmental issues back home.

"I honestly have not seen much from Debbie Dingell about the environment," Ballenger said. "She has just been very quiet about that."

Ballenger noted, however, that Dingell’s name has been floated as a potential Democratic candidate for governor of Michigan in 2018, when there will be an open race for the post. He said she "certainly" would be considered a viable candidate.

When asked about the race, Dingell didn’t shut the door.

"2018 is a lifetime away," she said, adding that she is more focused on earning a seat on the House Energy and Commerce Committee in 2016 — the panel that her husband chaired for more than a decade and where he served for so long.