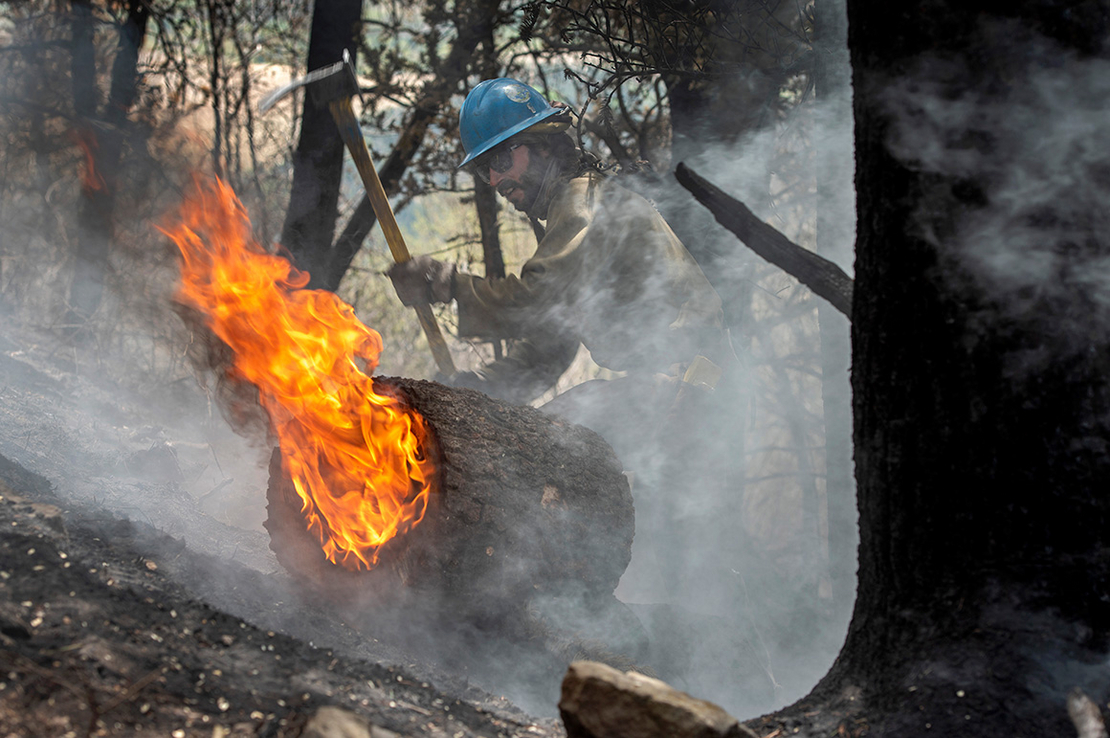 Tyler Freeman tried to keep a burning log from rolling down a slope in late May as he and his co-workers worked on hot spots from the Calf Canyon/Hermits Peak Fire in the Carson National Forest west of Chacon, N.M. Eddie Moore/The Albuquerque Journal via AP, File

The head of the Forest Service says in a new report that climate change is making prescribed fire increasingly dangerous even as the controlled burns remain essential for thinning the nation’s forests to prevent wildfire catastrophes.

Forest Service Chief Randy Moore issued the warning Tuesday in a detailed report examining how a prescribed fire in northern New Mexico grew out of control this spring and became the largest wildfire in state history, consuming an area nearly twice the size of New York City.

The report reveals a long list of errors including poor preparation and a failure to account for climate change, which had made the Santa Fe National Forest “much drier” than the Forest Service realized and created highly combustible conditions.

“Climate change is leading to conditions on the ground we have never encountered,” the report says. “We know these conditions are leading to more frequent and intense wildfires. Drought, extreme weather, wind conditions and unpredictable weather changes are challenging our ability to use prescribed fire as a tool to combat destructive fires.”

Although climate change is making prescribed burns increasingly risky, “prescribed fire must remain a tool in our toolbox,” the report says. “Unfortunately, the effects of climate change are narrowing the windows where this tool can be used safely.”

Forest Service fire models are not keeping up with changes in fire behavior, the report says, adding that “we need to better understand how megadrought and climate change are affecting our actions on the ground.”

The Forest Service report comes days after a Congressional Budget Office analysis of wildfires said an increasing number of acres are being burned each year, due in part to climate change creating “hotter, drier conditions that are more conducive to wildfire.” In addition, forest management for much of the past century has “allowed vegetation to grow denser,” and the dense vegetation is fueling wildfires, the CBO said.

The Hermits Peak Fire just east of Santa Fe, the state capital, has burned 341,000 acres since it began April 6 as a planned fire, forcing thousands of people to flee their homes and drawing sharp criticism of the Forest Service from Congress. Moore put a 90-day stop on all Forest Service burns in late May due to “continued extreme conditions.”

Rep. Teresa Leger Fernández (D-N.M.) said in a statement Tuesday that the Forest Service should “indefinitely suspend prescribed burns until it has fixed the glaring issues described in its report.”

But Moore said in the report that the Forest Service “must do more prescribed burning to improve the health and resilience of our forests and grasslands.”

The controlled fires are “vital to reducing the potential for catastrophic wildfires that are devastating to people, infrastructure and landscape health,” Moore added. “Restoring fire to these systems is the only path to living better with fire, to persisting on a planet that will only see more fire.”

But prescribed burns will have to be ignited “closer to the homes and the infrastructure that we have been tasked with protecting,” the report says.

The New Mexico fire began as the Gallinas-Las Dispensas prescribed burn aimed at thinning the forest of trees, brush and woody debris. But the Forest Service relied on an environmental assessment that was done in 2006 and “had not been revisited within the 16 years” since the assessment “although a change in fuels conditions likely occurred in that time,” the report says.

Sen. Martin Heinrich (D-N.M.) said in a statement that the report shows the Forest Service “made a number of preventable errors” in the periods before and during the prescribed burn.

“It’s evident that the warming climate is fueling the extremely dry and windy conditions that make our forests more vulnerable,” Heinrich said, adding that the Forest Service must account for a windier, drier reality.