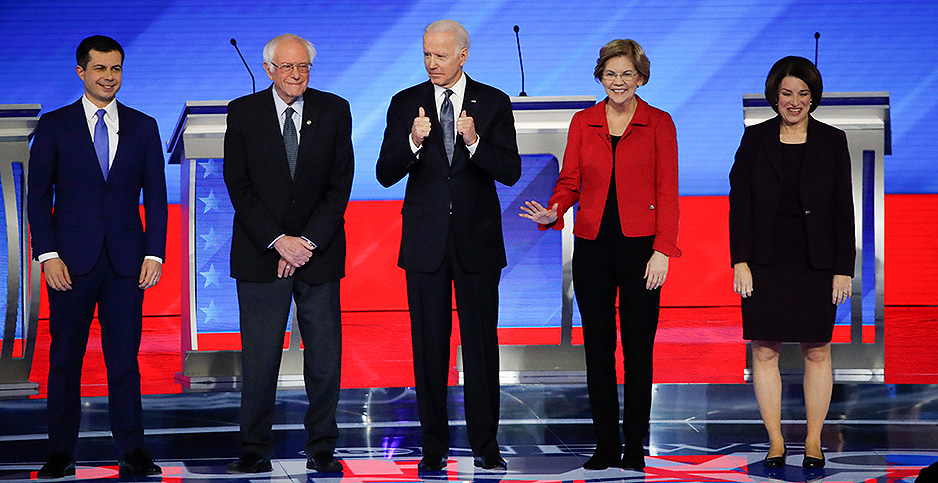 Democratic presidential hopefuls are escalating their attacks on one another as New Hampshire voters head to the polls tomorrow in the influential first primary of the 2020 campaign.

They sparred on environmental issues during a televised debate Friday, arguing about the absence of climate change in the U.S.-Mexico-Canada free trade deal.

Nearly all surveys in recent days had Sanders winning and Buttigieg at No. 2, with former Vice President Joe Biden and Massachusetts Sen. Elizabeth Warren largely fighting for third place.

Last week’s technological debacle during the Iowa caucuses, in which the results are still disputed, may be amplifying the focus for a clear winner in New Hampshire.

Biden, long seen as the front-runner to take on President Trump, came in fourth in Iowa, behind Buttigieg, Sanders and Warren.

The former vice president released a video over the weekend mockingly comparing his record and experience to Buttigieg’s.

"Under threat of a nuclear Iran, Joe Biden helped to negotiate the Iran deal, and under the threat of disappearing pets, Buttigieg negotiated lighter licensing regulations on pet chip scanners," the narrator says.

Sanders, who emerged from Iowa essentially tied with the former mayor, also went on the attack. "Pete Buttigieg has 40 billionaire donors. I’m proud to say our campaign has zero," he tweeted.

Seven of the top candidates faced off at St. Anselm College in Goffstown, N.H., in the first of a trio of debates scheduled this month.

Following tense arguments over the electability of Sanders and Buttigieg, candidates fought over overhauling the nation’s health care system, the nation’s military and campaign finance before shifting their attention to the United States-Mexico-Canada Agreement.

Both Sanders and former hedge fund manager Tom Steyer reiterated their opposition because of the deal’s silence on climate.

"We’re simply exporting fossil fuel emissions to Mexico," Sanders said. "There is not one word in that trade agreement that deals with climate change."

But Minnesota Sen. Amy Klobuchar and Warren slammed Sanders’ vote against the agreement, calling it a necessary step to future climate agreements.

Democrats, including Speaker Nancy Pelosi of California, have touted the agreement as an improvement — including on the environment — from what the administration negotiated originally.

"When it comes to climate change I think we have to have a North American trading bloc. We have to have Mexico and Canada and America working together," Klobuchar said. "I’ll work to make [climate provisions] a part of every future trade agreement."

Klobuchar went on to commit to a laundry list of other climate measures, including fuel efficiency standards, and pledged to introduce "sweeping legislation to put a price on carbon."

Warren said, "Everyone wants to get to the American market. We should be raising standards on climate around the world to get access to our market."

While just 24 pledged delegates are available of the nearly 3,000 who will go to the Democratic National Convention in July, the New Hampshire primary has long held outsize sway due to its place atop the election calendar.

Some of the lower-tier candidates, like Colorado Sen. Michael Bennet and former Massachusetts Gov. Deval Patrick, have put significant campaign resources into New Hampshire and are hoping for a relatively strong performance there.

The New Hampshire primary is also a major test for former Massachusetts Gov. Bill Weld, the remaining major candidate in the long-shot primary bid to take out Trump from within the Republican Party. Former Illinois Rep. Joe Walsh dropped out of the primary last week.

Weld has staked his entire primary bid on New Hampshire, though he’s unlikely to get much more than a few percentage points in the contest. A CNN/University of New Hampshire poll released yesterday had him at just 5% to Trump’s 91%.

Weld has used issues like climate change and budget deficits to contrast himself to Trump. He wants to rejoin the Paris climate agreement and implement a carbon tax, but is highly critical of Democrats’ big-dollar climate plans.

The Iowa Democratic Party reported Thursday that Buttigieg just barely beat Sanders in the caucuses. It reiterated those results over the weekend. But the Associated Press and other media outlets have declined to call the race.

Iowa Democrats said they were already reviewing results from 5% of the precincts. Campaigns have until noon EST today to formally ask for a full recanvass.