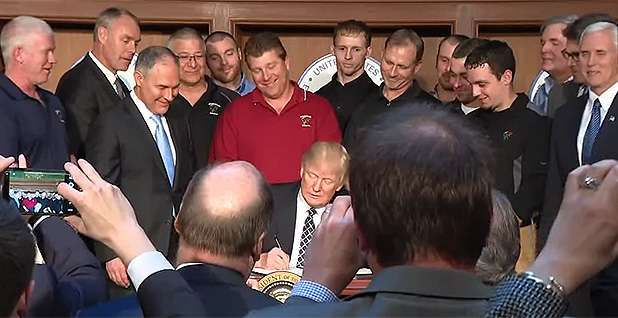 President Trump is surrounded by industry and political leaders as he signs the executive order on "energy independence" yesterday. Photo courtesy of the White House.

Despite the president’s message, there’s ample evidence to the contrary.

Coal, which electric power plants relied on for much of the last century as a cheap and abundant fuel, has a competitor in cheaper and cleaner-burning natural gas.

There’s little to support the revival of coal mines closed this century or depleted last century. Automation has made tens of thousands of coal jobs obsolete.

Court orders that compel U.S. EPA to enforce public health regulations aren’t going away. And coal is the largest power-sector contributor to climate change, which also isn’t going away.

Still, Trump’s presidential campaign promised the resurgence of American manufacturing. It would be built on cheap coal-based power, corporate tax cuts, buy-America commitments, and increased oil and gas production. That policy cornucopia, according to the White House, would mean U.S. energy independence.

At yesterday’s rollout of a White House executive order to undo President Obama’s regulations on energy producers, Trump shared the stage with a cluster of coal miners in the Map Room at EPA headquarters in Washington. EPA Administrator Scott Pruitt welcomed Trump to the federal agency that bore the brunt of his campaign attacks on the capital’s "swamp" of regulators.

"The miners told me about the attacks on their jobs and their livelihoods," Trump continued. "I made them this promise: We will put our miners back to work."

Introducing the president, Vice President Mike Pence said: "The war on coal is over." The reference teed up Trump’s order to shelve EPA’s Clean Power Plan, with its mandatory cutbacks in power plant carbon emissions, and other environmental regulations affecting energy development and output.

The executive order directs EPA and other federal agencies to review all actions "that potentially burden the development or use of domestically produced energy resources, with particular attention to oil, natural gas, coal, and nuclear energy resources."

Rick Manning, president of Americans for Limited Government, hailed the action, saying his organization "is confident that such a review will provide ample basis for revising and rescinding these regulations, ensuring that utility prices can come down for consumers."

The coal industry praised the president’s executive order as a lifeline against further losses. The White House yesterday cited a forecast by the National Mining Association that the Clean Power Plan would cause coal production to fall by 242 million tons.

With his recommitment to coal, however, a president who prides himself on being a hard-nosed businessman put himself at odds with transformations in the freewheeling energy markets, and particularly those affecting the coal industry, whose production has steadily slipped since 2001 as its employment plummeted.

The U.S. Energy Information Administration reported that nearly 15,000 megawatts of coal-fired power plant capacity was retired in 2015. The Trump administration actions may slow that trajectory, said Thad Huetteman, head of EIA’s electricity analysis team, but not reverse it.

"What we’re going to see is that coal assets in particular, which would have been put out to pasture, may hang around longer because of this," he said.

But it won’t be a coal renaissance, said Francis O’Sullivan, director of research for the Massachusetts Institute of Technology’s Energy Initiative.

"The message is very simple," he said. "We are awash in relatively low-cost natural gas in the United States. I don’t see that changing dramatically anytime soon."

Even as the Clean Power Plan was being drafted inside EPA at the start of Obama’s second term and eventually put on hold by the Supreme Court, many of the largest electric power companies were turning away from coal.

Shortly after the November election, a pair of leading utility CEOs, Tom Fanning of Southern Co. and Bob Rowe of NorthWestern Energy Corp., said the election results provided no reprieve for coal, nor would they alter their industry’s drive to replace coal plants that weren’t working economically or required major upgrades.

A more consequential impact of Trump’s actions is the shift in decisionmaking on energy, environment and climate policy from Washington to the states, said Sue Kelly, president and chief executive of the American Public Power Association, which represents the nation’s municipal utilities. "I took a lot of comfort in those statements" made by Trump and his Cabinet members at EPA yesterday, she said.

While the "staging" of Trump’s announcement was built around coal, Kelly said the executive order "goes way beyond that" because it inherently allows more flexibility "to do what we think is best" at the state and local levels.

But what’s best for states may not also be best for the coal industry, she indicated. "In all cases, that may not be to continue to operate coal plants," she said, noting that power plant operators in Kentucky and Florida have recently announced new coal plant closures.

"It’s important that we make the decisions we need to make about those plants and not have our hand forced by federal regulation," she said.

Jim Matheson, Kelly’s counterpart at the National Rural Electric Cooperative Association, represents a far-flung assortment of electric cooperatives, many of which rely on relatively new coal plants that still carry debt and have years to go before they can be retired.

"Market conditions and prices are going to be what help us decide the best way to provide both affordable and reliable power," Matheson said.

Moving away from federal leadership also portends an even deeper political split among "red" and "blue" states, with clouded implications for the country as a whole.

In his remarks yesterday, Trump criticized the Obama Clean Power Plan as "a crushing attack on American industry" and "a theft of American prosperity."

He spoke of cheaper power to come. EPA’s Pruitt said in an interview on ABC News’ "This Week" that the planned executive order would lower electricity rates.

According to data kept by EIA, however, the real average retail price of electricity is lower than it was in 1960. And since the Obama administration issued the proposed Clean Power Plan in June of 2014, retail electricity rates for all sectors were lower at the end of 2016 than they were in June of 2014.

Further, U.S. natural gas drilling continues to churn in the nation’s shale basins. EIA data show that fracking operations are producing more and at a lower cost. As coal gets a leg up from Trump, drillers keep finding ways to pump more gas to replace coal.

"When you turn to employment, job creation and economic development in coal communities, the plan won’t really change what is a very dim future for coal. There is simply no way around it," Muro said.

The gas glut delivered by hydraulic fracturing has brought gas even with coal in price as a fuel for electricity generation. Coal also faces increased competition from wind and solar power, which have gotten cheaper and in some states have undercut coal and gas as the least expensive way to make electricity.

‘Keep it in the ground’

Eastern coal mined underground has lost out competitively to Western coal, taken from surface mines, where automation has boosted productivity and profitability but not job growth.

Lifting the moratorium — which was originally expected to span three years — is not expected to have an immediate impact on market conditions that have suppressed coal extraction, according to a Feb. 23 note from FBR & Co. But it could be a plus for producers in the coal-rich Powder River Basin, the note says.

"We view the move as positive for PRB [Powder River Basin in Wyoming and Montana] names in the long term because it alleviates future constraints and staunches what would likely have been an effort to significantly increase royalty rates," the note says. "Some suggestions would have raised royalties from 12.5 percent to 18.75 percent.

"Additionally, the move is a symbolic step against the ‘keep it in the ground’ movement and a sign of optimism for fossil fuel industry regulation."

The order instructs Interior Secretary Ryan Zinke to review and ultimately suspend, revise or rescind four rules related to oil and gas development on public land. Three of those regulations, including the Bureau of Land Management’s Methane and Waste Prevention Rule, have been targeted by Republican lawmakers for repeal under the Congressional Review Act. The effort to strike down BLM’s methane rule has been stalled in the Senate as GOP legislators attempt to gather the support of a simple majority in the chamber (Energywire, March 8).

The administration also pinpointed BLM’s fracking rule as a target for review. The 10th U.S. Circuit Court of Appeals this month delayed proceedings on the regulation following indications that Trump’s Interior Department was planning to rescind the rule (Energywire, March 17).

"This executive order sends a signal that fossil fuel production is the top order of business for public lands, and that special interests will continue to trump viable and essential environmental safeguards," said the Wilderness Society President Jamie Williams.

"Very obviously, today’s action is based on a desire to deliver on that campaign promise to that particular constituency," MIT’s O’Sullivan said.

The economic consequences of unchecked climate change are much more dramatic, he added. "A more thoughtful approach would have been to step back and cast a more analytical eye on outcomes and ask critical questions about that, given the economic priorities and national security priorities this administration has," he said.

"The policy response then misses the mark," Muro added. "What’s really needed is a very serious coal country disruption focus, more effort to stabilize communities, to help workers reposition or move, or helping some simply retire in a dignified way, and more to help communities."